Newlywed marine who fell into a pothole while carrying his wife across the parking lot as they left a bar sues the owners after she later died of her injuries  John Pinkham 23, and wife, Robyn, 22, danced all night at Coyote Bar and Grill  Mr Pinkham was carrying his newlywed wife to car when he tripped in pothole The new young bride died as a result of head injuries five days later

By Corazon Miller For Mailonline

A marine is suing the owner of a parking lot in Carlsbad, California, after he tripped on a pothole while carrying his wife who later died from her injuries.

John Pinkham, 23, was carrying his newlywed in his arms through the parking lot in Carlsbad's Village Faire after a night of dancing, when he stepped in the pothole.

The details of the lawsuit published by NBC New York said the couple had been out at the Coyote Bar and Grill with friends on the evening of June 14, 2019. 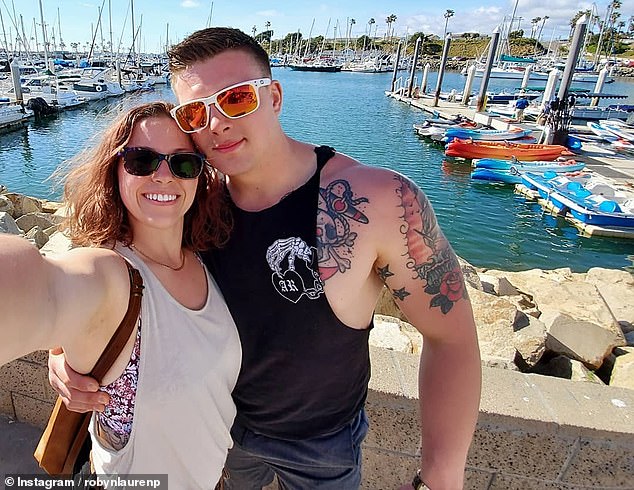 The couple can be seen in this photo on Robyn Pinkham's Instagram page in happier times. Her husband has launched a lawsuit suing the owners of a parking lot for not safely maintaining a path that he says played a part in his wife's death