Thomas Markle today denied criticism of his daughter for quitting as a royal is laced with racism as he blasted Meghan and Harry's 'preaching' on the environment before insisting he has not given up hope of a reconciliation - and urging the Duke of Sussex to 'man up' and meet him.

The Duchess of Sussex's estranged father spoke to Piers Morgan and Susanna Reid on ITV 1's Good Morning Britain in his first live TV interview since she left Britain for Canada, calling the decision 'embarrassing' and 'hurtful' to the Queen.

The Sussexes have received stinging criticism for their bombshell choice to resign as senior royals after just 20 months of marriage - but Mr Markle is sure this is not because his daughter is mixed-race.

Speaking from California he said: 'I'm having trouble buying that. There's never been a problem with Meghan in terms of her race. I think England is far more liberal than the US, I don't think she is being bullied in anyway, or any shape, because of racism'.

Piers Morgan then asked if the couple's use of private jets when urging the world to tackle climate change was hypocritical, Mr Markle said: 'I think it is, if you are preaching to do that then you should be responsible. Take a note from your brother [William] and take public transportation'.

The 75-year-old today revealed he now plans to do a major interview every month in the hope his daughter will 'reach out' to him.

Meghan's mother Doria, Thomas' ex-wife, was his last hope but has failed to respond to his letters, he said, adding: 'We have had no conversations, so obviously she [Doria] is avoiding me or has been told to'.

And when asked what he would say to Meghan if she was watching the show this morning he said: 'I would tell her: 'I love you, let's sit down and work this out',' and his message for Harry would be: 'Man up and fly down and see me and we will talk'.

It is not yet known if Thomas was paid for the GMB interview, but he is understood to have secured £7,500 to appear on the show in 2018 and is said to have earned five-figures from a bombshell 90-minute documentary on Britain's Channel 5 last week. 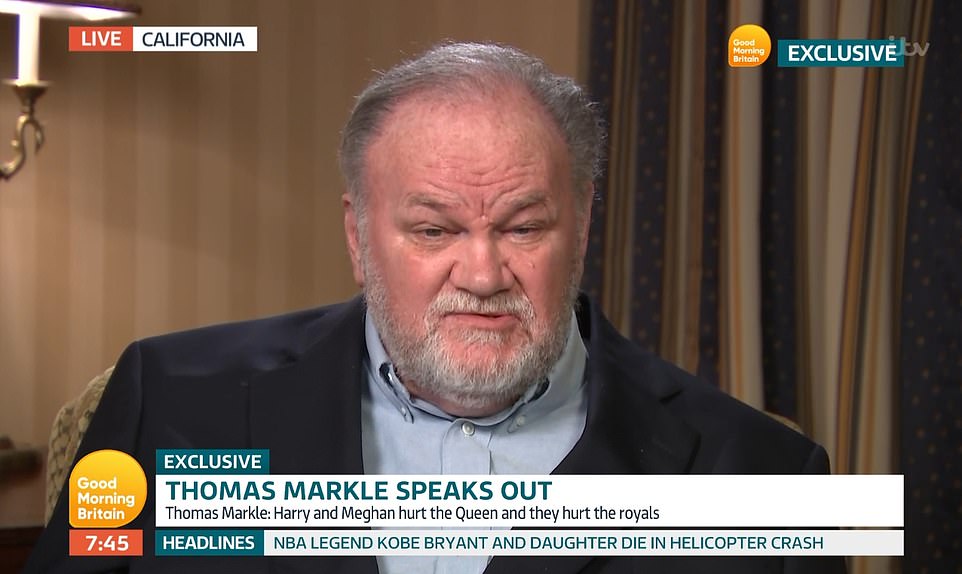 The Duchess of Sussex's estranged father has spoken to Piers Morgan and Susanna Reid (left) on ITV 1's Good Morning Britain in his first live TV interview since she leave Britain for Canada, calling their decision 'embarrassing'

Thomas Markle: What he said in wide-ranging first interview with GMB since Megxit

His message to Harry

Man up and fly down and see me and we will talk.

On his regular media interviews

After this interview if I don't hear from someone in 30 days then I will try again. I don't want to sit in silence in my living room for the rest of my life waiting for someone to get back to me

On alleged racism towards Meghan

I'm having trouble buying that, there has never been a problem in terms of race with Meghan at her school or in any place and I haven't noticed it in England at all, I think England is far more liberal than the US when it comes to races, I don't think she is being bullied in anyway, or any shape, because of racism.

Criticism of Harry and Meghan's private jets and long-haul flying

I think it is just, if you are preaching to do that then you should be also as responsible as to what you are preaching. Take a note from your brother and take public transportation, it makes more sense.

On Sussexes quitting as senior royals

As far as what they've decided to do is embarrassing. I think when they got married they married into royalty and they knew what they were getting g themselves into. That is Harry's life and Meghan had a similar life and I think they have hurt the Queen and the Royals and it just doesn't work to be going to another country and serving England is never going to work, I'm a little embarrassed for them and feeling sorry for the Queen.

On his health and being estranged from Meghan

My health is mixed, I suffer a lot of stress because of what's going on, every day there is a new thing happening and the press shows up at my door. I am still very disappointed in what's going on. Of course I love my daughter and grandson and I'm sure I would love Harry if I met him. This decision is very confusing, I don't think anyone understands.  I'm still very disappointed as to what happened I think it's a misunderstanding which should be worked out between two families. I'm not sure exactly how to approach this, I'll always hope that we can come together at some point. Right now with what's going on the break from the royals is going to cause far more problems. What I'm saying now will also cause problems. I'm disappointed I haven't seen my grandson and I really miss my daughter.

On seeing Meghan again, and meeting Harry and Archie for the first time

For me there is no other way to reach them. I will give an interview and wait for 30 days to get an answer back and that's the only shot I have. I've spoken and sent letters to Doria to get to Meghan as well.

On watching the Royal wedding

This was a few days after my [heart] procedure, I was very saddened that I couldn't be there, I thought it was beautiful. I was honoured that Charles would walker her down the aisle and thankful but I wished it was me. I cried for a bit for that

On the pap stunt

With Markle vs Markle court case looming he said: 'If it comes to meeting them in a courtroom that is great, at least I finally get to see them' He will do a big interview every 30 days in the hope it will push his daughter into contacting him;  Duchess' father has even written to Meghan's mother Doria to try and reach out to his daughter but has received no answer; Thomas urged Harry to 'man up' and fly down to meet him in Mexico - saying he should have done it two years ago;  If Meghan is listening to him today he'd say: 'I love you, let's sit down and work this out';  On baby Archie: 'I’m really disappointed I haven’t seen my grandson';

Mr Markle has not spoken to his daughter since the eve of her wedding to Harry in May 2018, calling the couple's decision to quit as senior royals the 'dumbest thing'.

He says his health has faltered since they became estranged and although he admits his media interviews will upset Meghan and Harry, he still hopes they will be reunited.

He said: 'I love my daughter, I'd love my grandson and I'm sure I'd love Harry if I met him.

He added: 'It's silly it's gone on for too long, I would like to make peace with Meghan and Harry. I am at their mercy, if they want to get in touch with me I'm sure it won't be a problem'.

He said he is 'embarrassed' by Harry and Meghan's decision to  break ties with Harry's family and flee the UK.

Asked what he would say to people who are critical of him doing TV interviews, Mr Markle told Good Morning Britain: 'I would tell them to try being in my position for a while and see what it's like - have a family member ghost you and not speak to you, and see how you feel.

'It's something that stays with you 24/7 every day, and it never goes away.

'It's always on your mind. You wake up with it. You go to sleep with it. It's very hard to deal with.'

Mr Markle said his message to the Duke of Sussex is: 'Man up and fly down to see me. And we'll talk.'

Asked what he would say to Meghan, he told Good Morning Britain: 'I'd say I love you and let's sit down and work this out. She was the closest thing to me for years and years and years, until she went off to college and even then.

'This is ridiculous. We should get together.'

Asked about the possibility of meeting Meghan and Harry at court as part of her legal action against Associated Newspapers, owner of the Mail on Sunday, Mr Markle said: 'If it comes to meeting them in a courtroom, that's great. At least I'd finally get to see them.'

He went on to say he did not want a 'battle'.

He added: 'The letter was sent to me, it was described in People Magazine by people calling "themselves friends of Meghan" as a loving letter reaching out to me - the word love never came in the letter except at one time when she said her "loving husband", she never once asked about my health how I felt or anything. This letter that was sent to me - she claims it was her letter but if it has a stamp on it in the United States it becomes my letter as well.

'I reached out to the Mail on Sunday, they didn’t come to me. I reached out and I said I want to publish part of this letter because I want to make some things straight about what was being said about me in People Magazine'.

Mr Markle said he still feels that Harry could reach out to him now, adding: 'This shouldn't keep going on. I mean they are putting this... making this a big drama for the world every day is kind of ridiculous.

Family furore over Singapore founder's will deepens after tribunal ruling