Jubilant Tories have hailed the first day after Brexit - mocking doom-laden predictions about the consequences of leaving the EU.

Defence minister James Heappey joked that the 'sky has not fallen in', tweeting that it was a 'big relief'.

Steve Barclay and James Duddridge were joyful, despite their jobs as Brexit Secretary and minister being axed at 11pm - when the government department was abolished.

It has also emerged Boris Johnson's dog Dilyn was partying last night, as the PM's partner Carrie Symonds posted a picture of their pet clad in a Union flag coat, apparently taken at a reception held in No10 last night. 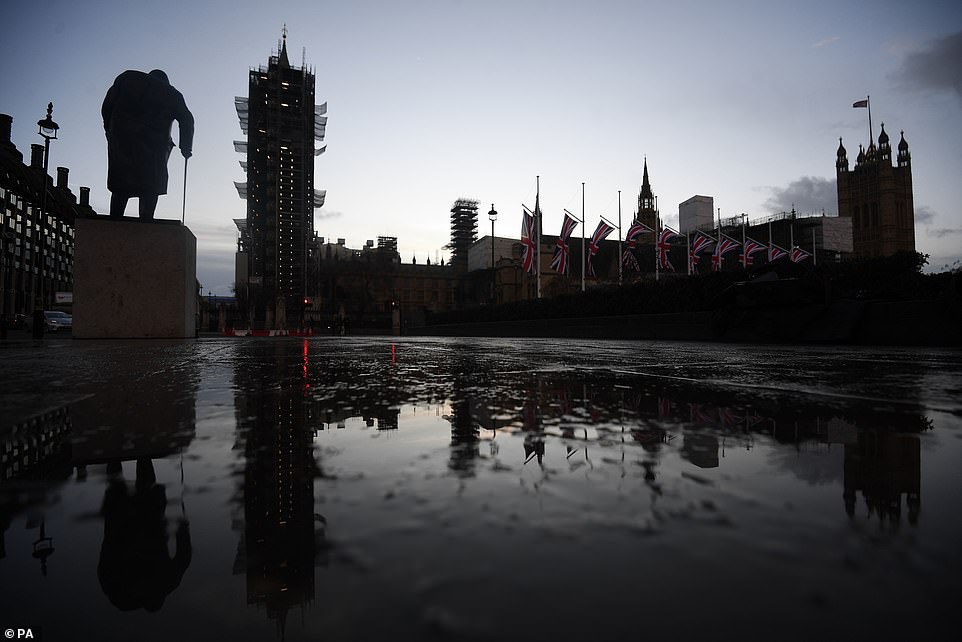 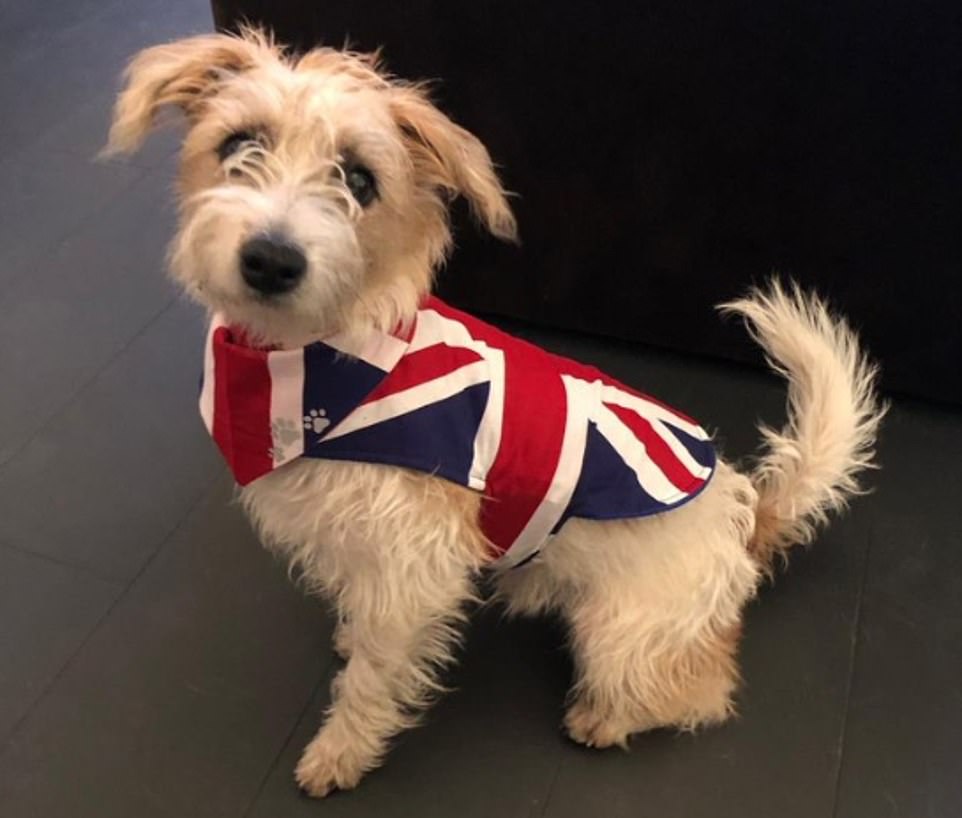 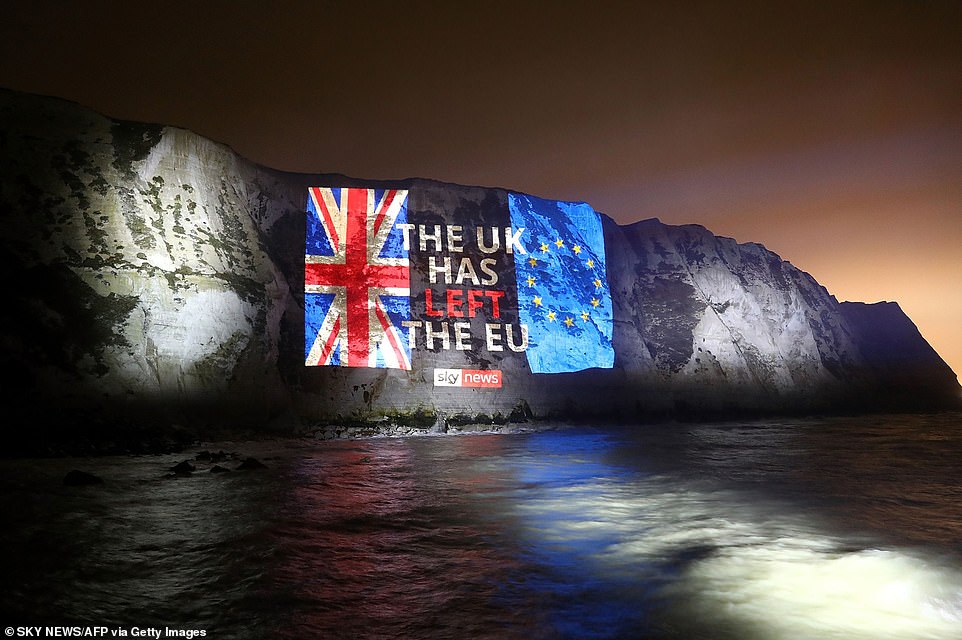 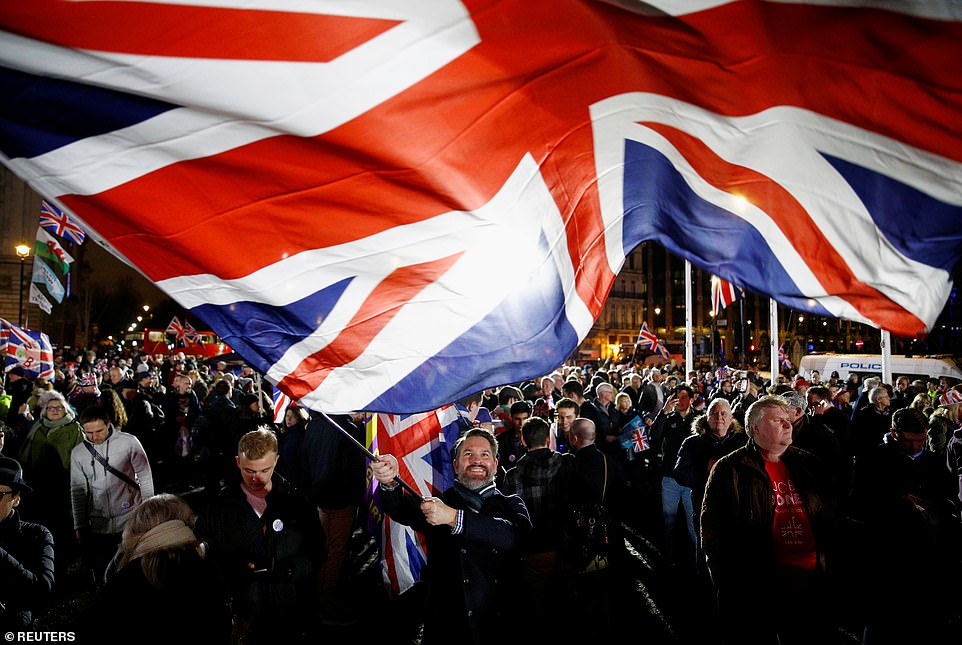 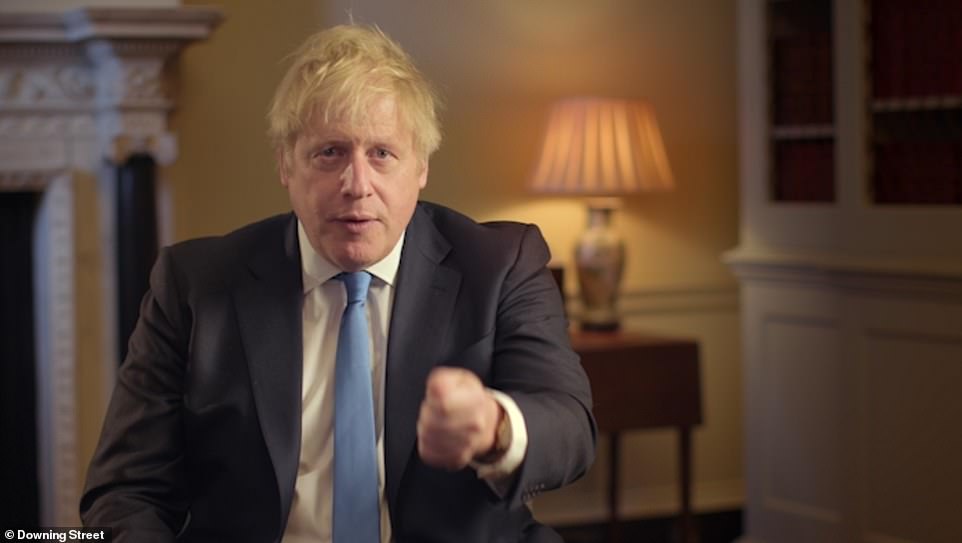 In an address to the nation last night, the PM shunned triumphalism despite the UK finally leaving the EU after four years of turmoil

Defence minister James Heappey joked today that the 'sky has not fallen in', tweeting that it was a 'big relief'

Steve Barclay tendered his resignation as Brexit Secretary at 11.01pm, saying it had been a 'great honour'

The government had already announced that the Brexit department was being scrapped immediately the UK leaves the EU.

A handful of arrests on Brexit night

Brexit night went off in a largely peaceful manner, despite the at-times bitterly divided lengthy run-up to January 31.

As people both celebrated and mourned the UK's departure from the EU at major events across the country, there were just a handful of arrests.

Police dealt with five people in Whitehall in London, including one man who was charged with criminal damage and being drunk and disorderly.

Kevin Murphy, 52, from North London, was due to appear at Westminster Magistrates' Court on Saturday, the Metropolitan Police said.

A 47-year-old man was arrested on suspicion of threatening behaviour but later released from custody and will not face any further action.

In Glasgow, there was a heavy police presence as groups for and against Brexit held events near each other.

Pro-EU campaigners gathered at the Donald Dewar statue on Buchanan Street ahead of the official departure time of 11pm.

Police said one 25-year-old man was arrested over minor disorder.

'A proportionate policing response was in place to ensure public safety and minimise disruption to the wider city centre community. The events passed peacefully with only one arrest of a 25-year-old man in connection with a minor disorder offence in Buchanan Street.'

The Police Service of Northern Ireland said there had been no arrests at a celebration in Belfast.

The premier is expected to bring forward wider changes to Whitehall when he carries out a major reshuffle over the next couple of weeks.

Mr Barclay tendered his resignation at 11.01pm, saying it had been a 'great honour' - and it is not clear whether he will be brought back into the fold by Mr Johnson in his new-look team.

Mr Duddridge declared it was 'job done' this morning and he was leaving government.

He wrote: 'Last night, we got the job done! It has been a privilege to serve in the team that delivered Brexit, and with @DExEU having achieved its purpose, l have written to @BorisJohnson to formally resign as Parliamentary Under-Secretary of State.'

As the historic moment finally arrived last night, Mr Johnson vowed Brexit will 'unleash' Britain but warned there will be more 'bumps in the road'.

In an address to the nation, the PM shunned triumphalism despite the UK finally leaving the EU after four years of turmoil.

Instead he appealed for unity - and insisted he recognised that not everyone was delighted with the path the country is taking. Mr Johnson said the EU had 'admirable' qualities but was going in a direction that 'no longer suits' the UK.

Speaking from Downing Street in the pre-recorded message - but notably without any patriotic backdrop - the premier said it was crucial to take advantage of reclaiming sovereignty to 'level up' the country, and improve life in left-behind areas.

'For many people this is an astonishing moment of hope, a moment they thought would never come,' he said.

'And there are many of course who feel a sense of anxiety and loss.

'Then of course there is a third group – perhaps the biggest – who had started to worry that the whole political wrangle would never come to an end.

'I understand all those feelings, and our job as the government – my job – is to bring this country together now and take us forward.'

Mr Johnson voiced pride that he was able to 'obey' the verdict of the British people, but stressed the legal exit from the EU was 'not an end but a beginning'.

'This is the moment when the dawn breaks and the curtain goes up on a new act in our great national drama,' he said.

No10 and other government buildings in Whitehall were lit up for the crucial occasion, and Nigel Farage is headlining the party in Parliament Square.

However, the official celebrations were deliberately low-key. Mr Johnson himself hosted a reception in Downing Street, drinking English sparkling wine with guests believed to include girlfriend Carrie and aides.

Meanwhile, Remainers have been showing their dismay across the UK, with angry demonstrations in Scotland.

While Britain is now legally out of the bloc, Brussels rules will still apply for another 11 months under 'transition' arrangements. The EU is gearing up for another major battle over future trade terms. 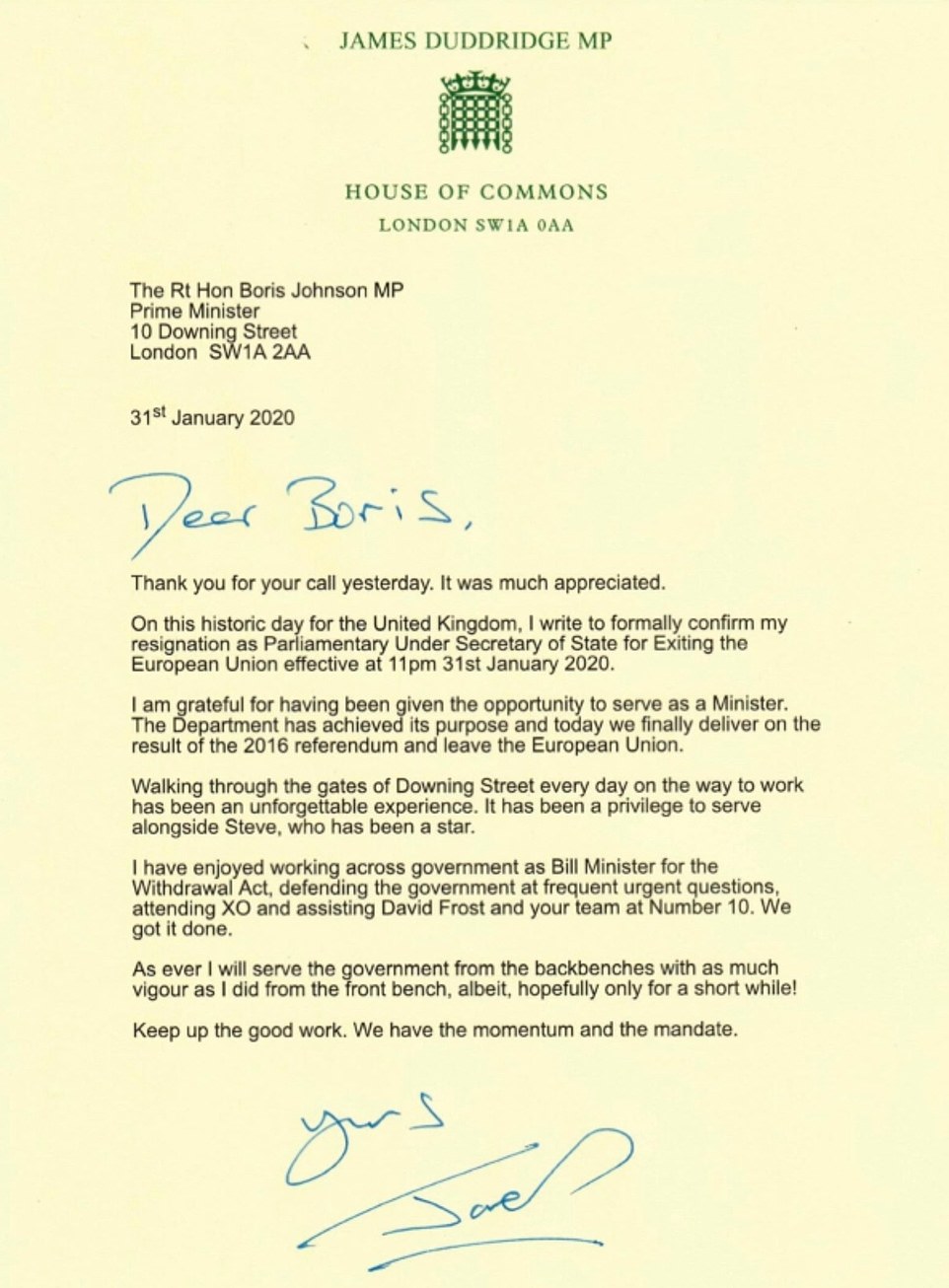 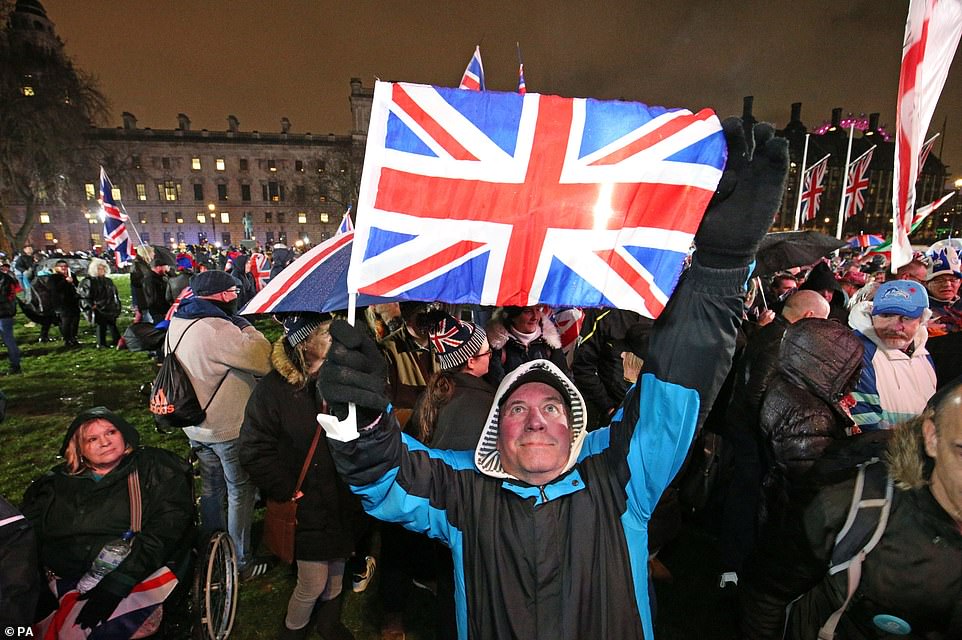 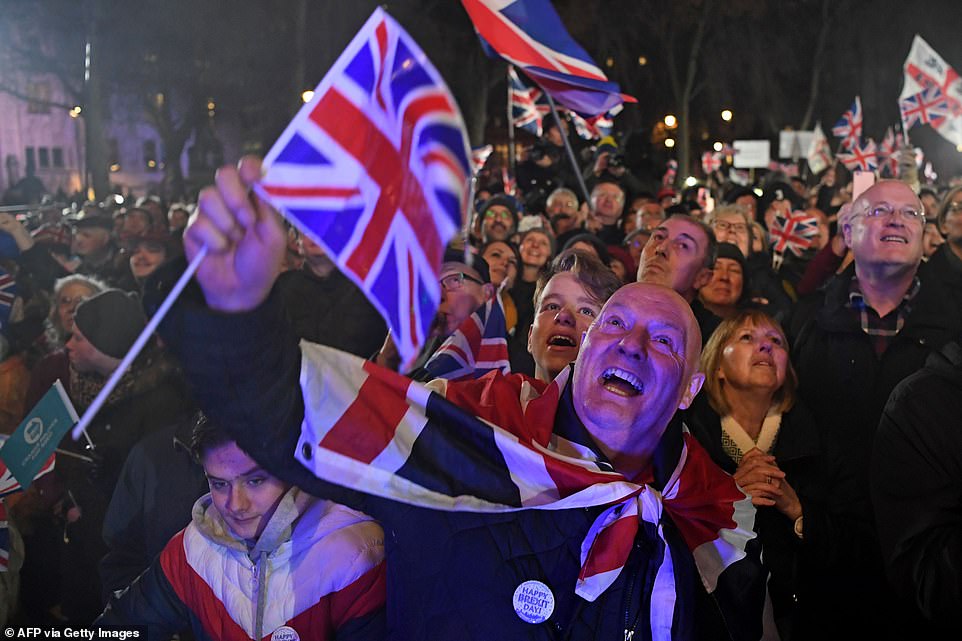 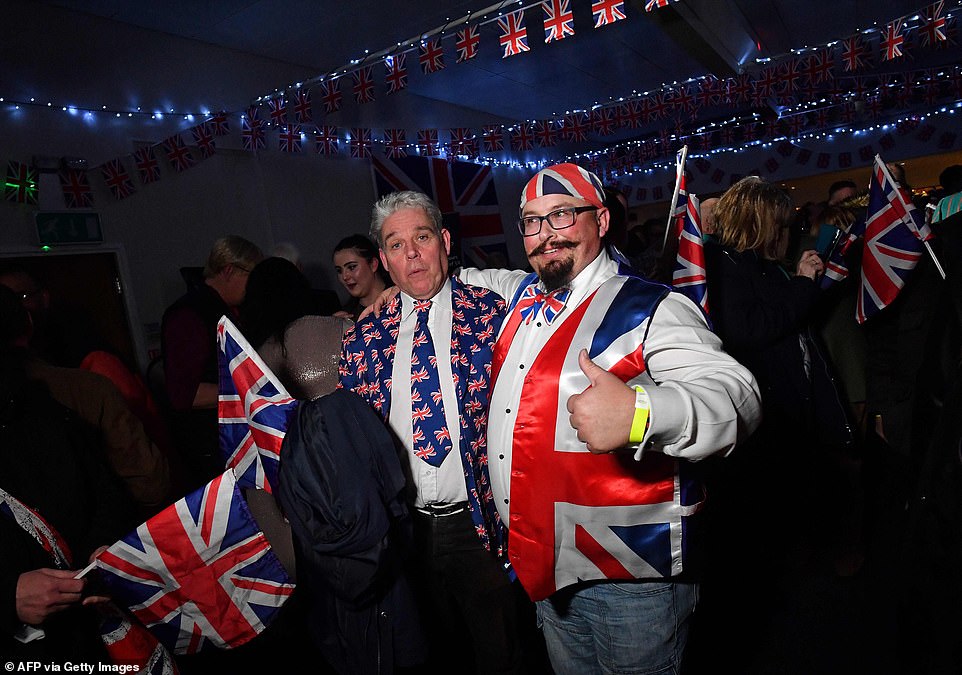 Brexit supporters react during a Brexit Celebration party at Morley rugby club. The celebrations got into full swing well before the 11pm, when Britain finally divorces from the bloc after three and half years of wrangling 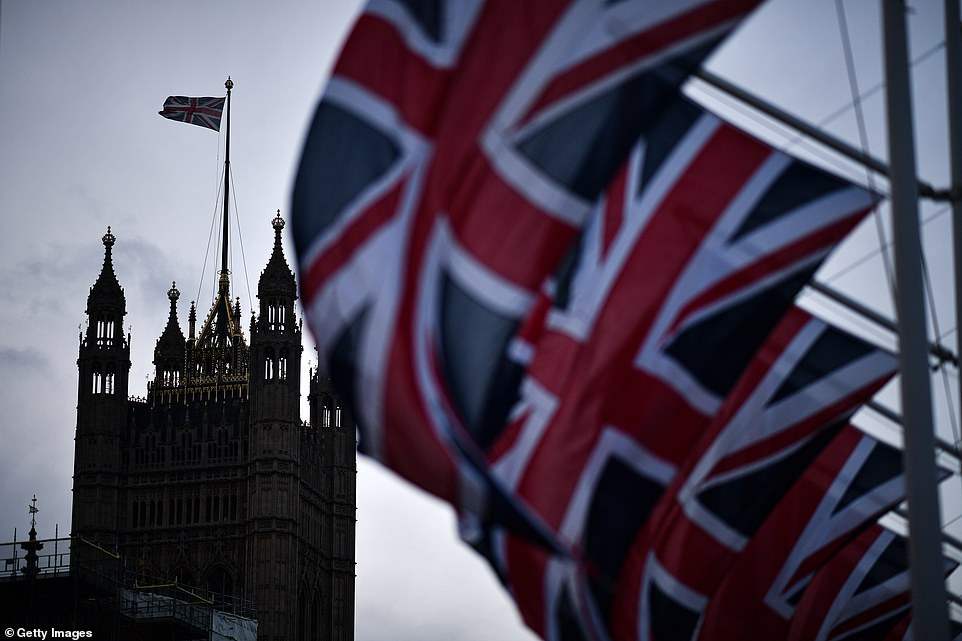 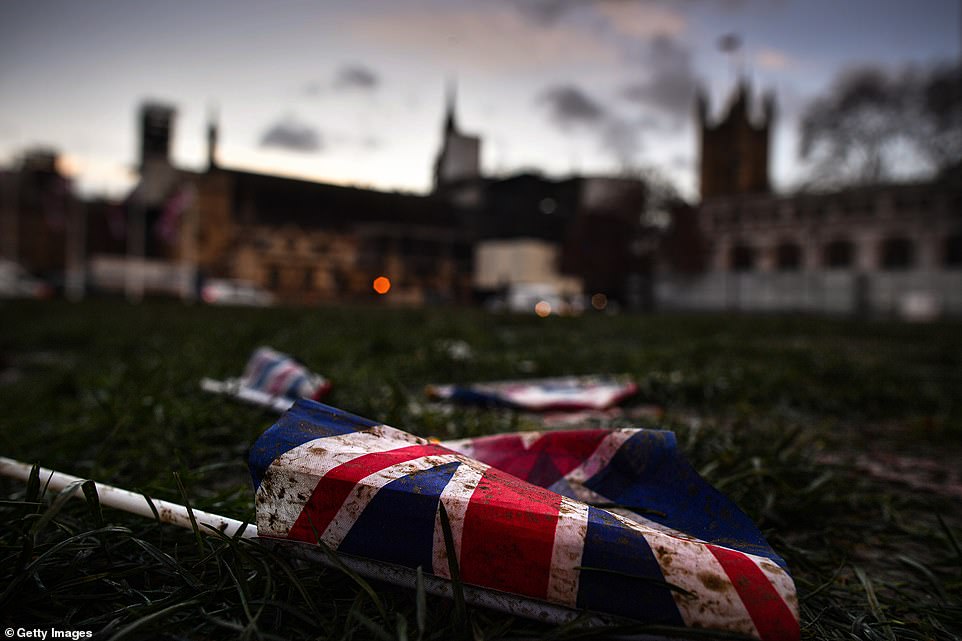 A Union Flag lies on the ground in Parliament Square in Westminster, London, as Britain woke up free from the European Union 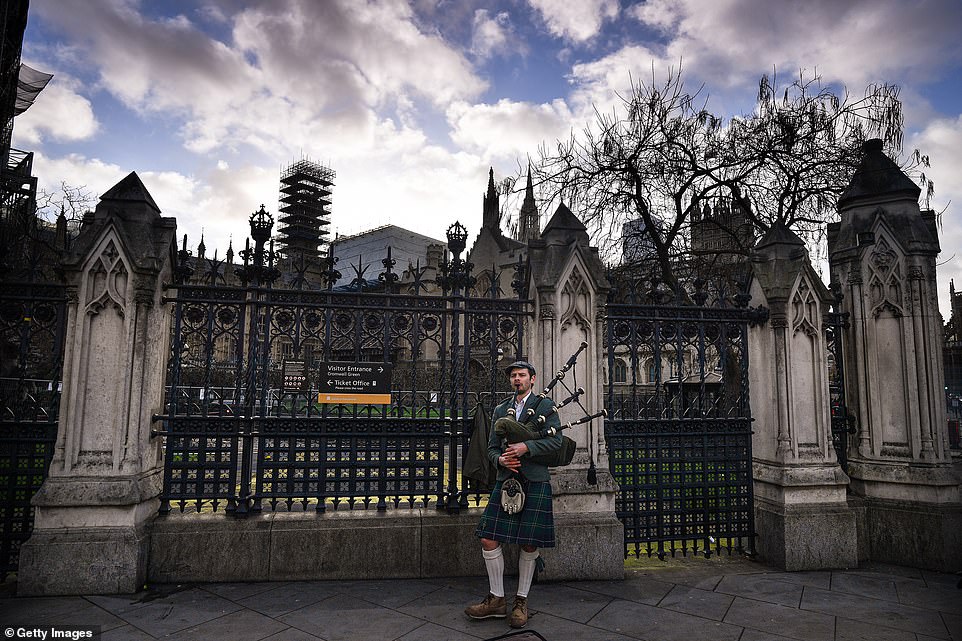 A piper plays outside the Palace of Westminster on Saturday morning, with a wrapped up Elizabeth Tower in the background

Former Brexit secretary David Davis said it would be a 'fair race' to strike a trade deal with the EU by 2021 but that it 'can be done'.

He said extensive work had already been completed when he was in the Cabinet to analyse every free trade deal Brussels had previously struck with other third countries.

'That being said, a lot of work has been done.

Kaley Cuoco gets caught in a torrential downpour as she films scenes for her ...