The BBC has provoked outrage by screening an 'anti-British' children's programme on Brexit Day.

Hosted by Left-wing comedian Nish Kumar, Horrible Histories Brexit suggested Britain had historically failed to produce anything of note, relying instead on imports.

Amid a chorus of protest, even one of the BBC's broadcasters launched a stinging attack on the show. Leading political commentator Andrew Neil last night called it 'anti-British drivel of a high order' and asked: 'Was any of the licence fee used to produce something purely designed to demean us?'

Kumar begins by introducing a series of CBBC 'comedy' clips. In one sequence, Queen Victoria is labelled 'foreign' and portrayed as a dullard who is shocked to discover that sugar, tea and cotton do not come from England.

Her manservant performs a song suggesting that Victorians only had access to these goods because of slavery and imperial might. Yet slavery was abolished four years before Victoria came to the Throne. 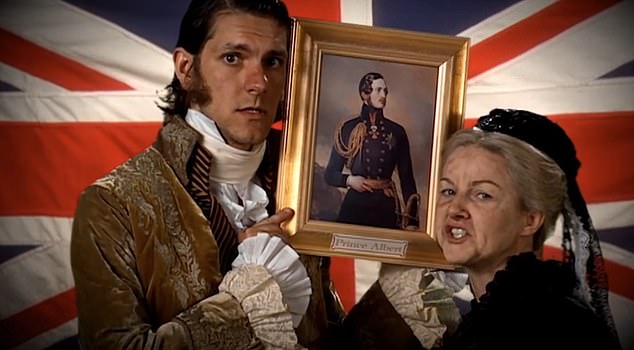 Hosted by Left-wing comedian Nish Kumar, Horrible Histories Brexit suggested Britain had historically failed to produce anything of note, relying instead on imports

He sings: 'Sugar is Caribbean-imported. For sugar in your cup of tea, slavery's been supported. I know it's wrong, your Majesty, but slaves in Africa worked hard in fields of sugar cane to sweeten up your char.' 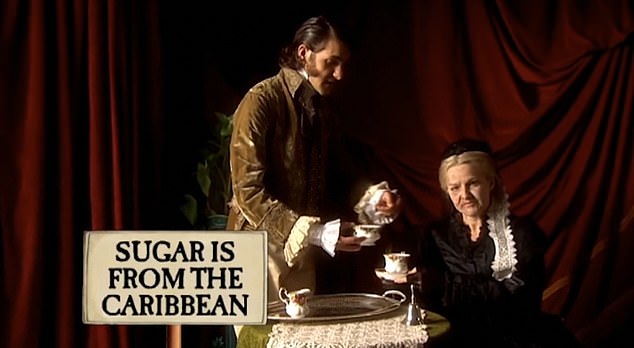 Kumar begins by introducing a series of CBBC 'comedy' clips. In one sequence, Queen Victoria is labelled 'foreign' and portrayed as a dullard who is shocked to discover that sugar, tea and cotton do not come from England 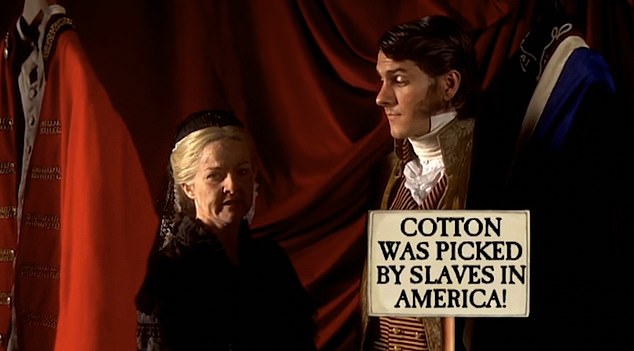 Her manservant performs a song suggesting that Victorians only had access to these goods because of slavery and imperial might. Yet slavery was abolished four years before Victoria came to the Throne

Historian Andrew Roberts described the ten-minute show – released on Friday on BBC iPlayer to coincide with the departure from the European Union – as 'a stream of bigoted hatred directed against this country'.

He added: 'These sneering attitudes to all things British should not be forced down the throats of children by the BBC. It is an attempt to make us despise our ancestors in a purely ahistorical way.'

Kumar, who hosts the comedy satire show The Mash Report on BBC2, begins the show by talking sarcastically about Brexit.

The truth is that we LED the fight against slavery

The skit lambasts Britain's role in the slave trade but fails to mention that it was abolished in 1833, four years before Queen Victoria came to the throne.

The sketch depicts Victoria in the mourning clothes she wore after Prince Albert's death in 1861 – which suggests she was still consuming slave-produced sugar at least 28 years after the practice was abolished.

Of course, British merchants had grown rich on the profits from cruelly shipping African slaves to the Americas, but almost all European colonial nations took part too.

In fact, this country was the first nation to abolish slavery, with evangelical campaigners led by William Wilberforce turning public opinion against the trade.

'Let us put an end at once to this inhuman traffic,' Wilberforce begged Parliament. 'Let us stop this effusion of human blood.' Spain and Portugal followed — albeit after being bribed — but France resisted, holding out until 1848.

As part of their anti-British propaganda, the Horrible Histories also condemn Britain's colonial rule in India.

It is accepted that the partition of the Raj last century was a colossal human tragedy stained with blood, but the early colonialists were considered by some as humane men.

The respected historian Lawrence James has said: 'On balance, the British Empire was a force for good and should be a source of national pride. It provided an interlude of stability in which countries divided by race and religion could develop and, in the case of India, discover a national identity.'

The Royal Navy's West Africa Squadron seized roughly 1,600 slave ships and freed 150,000 Africans. Britain also used its influence to force other countries to agree to end their slave trades and allow the Navy to seize their slave ships.

Victoria herself forged a close relationship with an Indian attendant called Mohammed Abdul Karim for the final 14 years of her reign.

The friendship between Karim and the Queen led to friction within the Royal Household, whose members thought the relationship was inappropriate.

But the Queen insisted on taking Karim with her on her travels and described him as 'a real comfort to me'.

In a mocking tone, he says: 'Here we are on the verge of Brexit. The UK is leaving the European Union. You might not have heard much about it because things have been so quick and so smooth. I mean, if anything, it's going too well.

'I thought as we stand on the verge of this historic moment we would look back at what Europe has done for us.'

Mr Roberts, the author of Churchill: Walking With Destiny, said: 'No one has ever suggested that sugar, cotton and tea were grown domestically. The idea that there are hardly any British things ignores the Industrial Revolution, the English language which is spoken in the Caribbean and India, English