Hundreds of flights into and out of European airports were cancelled as Britain's biggest storm in seven years swept into Scotland and the rest of the UK was put on warning for 90mph winds today.

Storm Ciara first brought gusts of up to 70mph on the west coast of Scotland on Saturday and it is set to sweep across the rest of the country throughout Sunday, as weather warnings remain in place across the country.

The bad weather has already brought chaos in the air as nearly 200 flights into and out of Europe, as well as dozens to and from UK airports including Heathrow and Gatwick, were cancelled or delayed last night.

In Scotland, officials put in place a 40mph speed limit on the Queensferry Crossing, and ferry services were also cancelled after a weather warning for gusts of up to 75mph was issued by the Met Office.

Yellow weather warnings cover the whole UK, with the heaviest rain expected over high ground where 50-70mm is expected widely with as much as 100mm in a few locations.

Forecasters have warned that flying debris could lead to injuries or danger to life, with possible damage to buildings and a chance of power cuts.

Power networks were also bracing for blackouts from gales wreaking havoc on overhead electric cables, and reassured the public they have crews on standby. 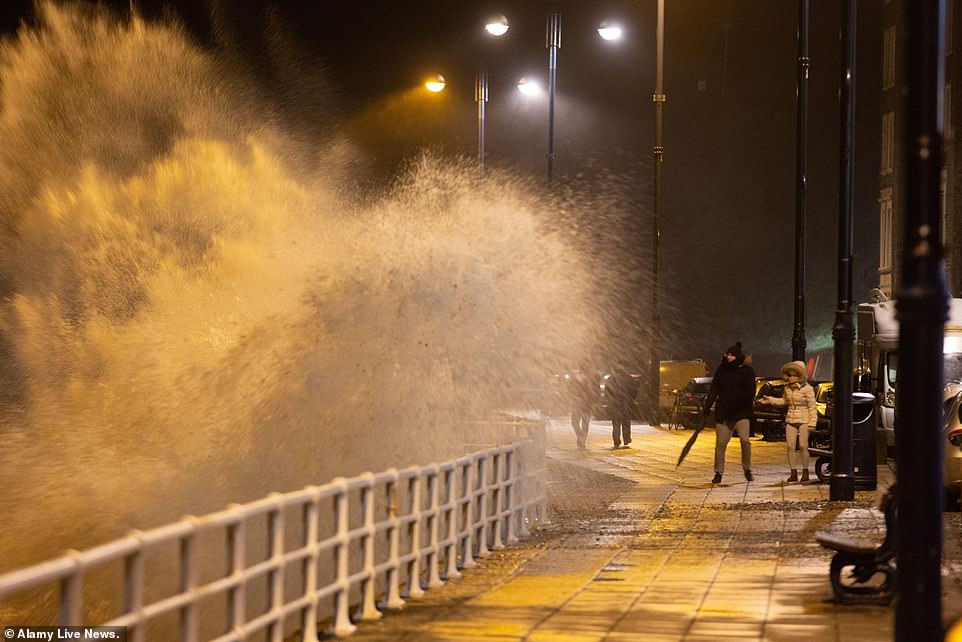 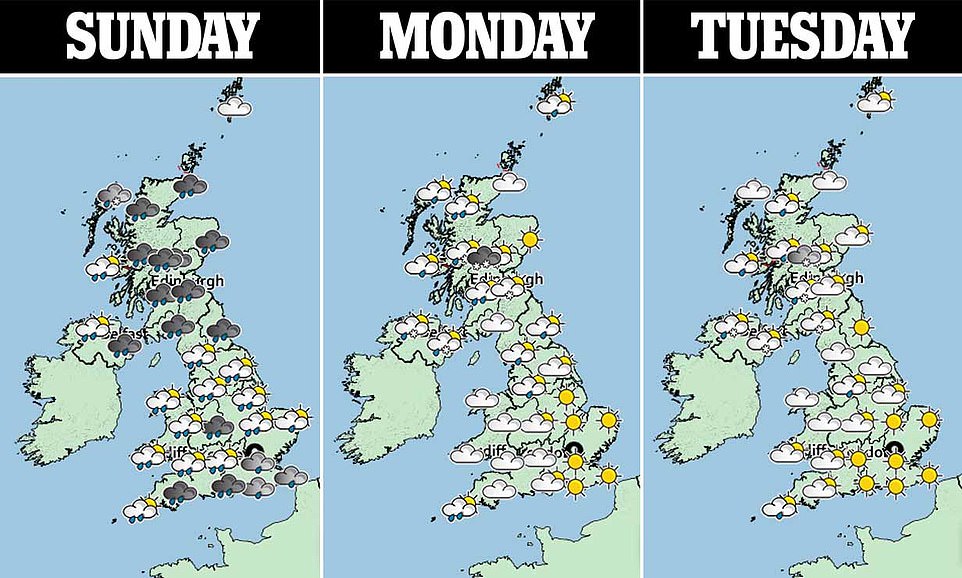 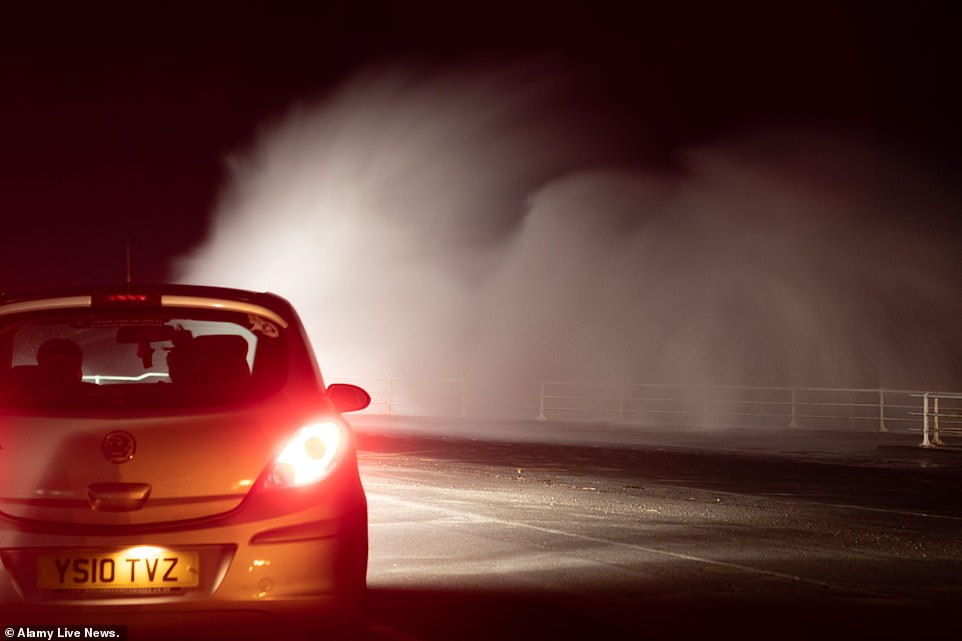 The bad weather has already brought chaos in the air as nearly 200 flights into and out of Europe, as well as dozens to and from UK airports including Heathrow and Gatwick, were cancelled or delayed last night. Pictured: A car travels amid sea spray from violent waves whipped up by the storm in Aberystwyth, Wales

The looming disruption in the air has already seen cancellations and delays at UK airports.

London's Gatwick and Heathrow airports have both seen disruption, leaving many passengers faced with hours of chaos.

Travellers hoping to arrive at Heathrow were faced with 37 cancellations and a further 50 delayed flights, while Gatwick saw more than 40 delays to both arrivals and departures.

Elsewhere around the country, flights are disrupted into and out of airports including the Glasgow, Manchester and Liverpool hubs.

Flights are delayed arriving and leaving major European cities too, with Frankfurt Airport seeing 21 cancelled departures and a further 116 delays,

The storm has also prompted all eight of London's Royal parks, including Richmond and Hyde Park, to be shut until Monday, while in Ireland, the opening ceremony of Galway's year as European capital of culture has also been called off. 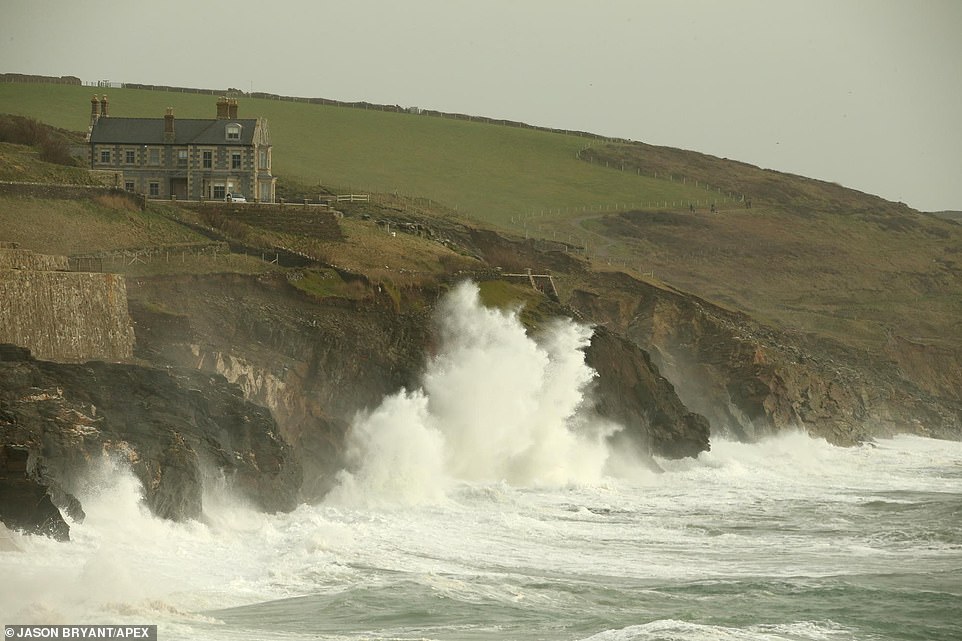 Yellow weather warnings cover the whole UK, with the heaviest rain expected over high ground where 50-70mm is expected widely with as much as 100mm in a few location. Pictured: Waves battered the Cornish coastline at Porthleven this afternoon as winds picked up the pace in the South-West of the country 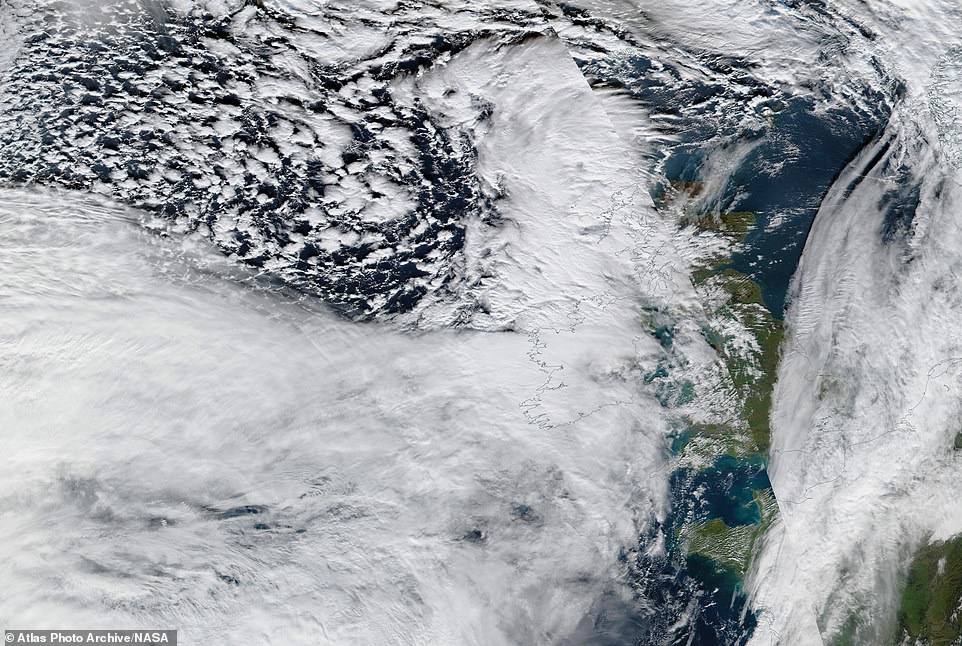 In Scotland, officials put in place a 40mph speed limit on the Queensferry Crossing, and ferry services were also cancelled after strong winds. Pictured: A satellite image shows clouds covering all of Northern Ireland and a large part of Scotland

Met Office chief meteorologist Frank Saunders said: 'Storm Ciara will bring damaging winds and heavy rain across the UK this weekend and we have issued a range of severe weather warnings giving people time to prepare for potential impacts of the storm.

'Winds will increase through Saturday across Northern Ireland, Scotland, northern England and Wales, before turning very windy across the rest of UK through the early hours of Sunday morning.

'Gusts of 50-60mph are expected quite widely across inland areas, with even stronger gusts of 80mph or higher along coastal areas, especially in south-east England and northern Scotland.'

Fog, snow and rain will bucket down on much of the nation and high winds are powerful enough to rip tiles from roofs, forecasters warned.

Storm Ciara is strengthening into a 'weather bomb' as its air pressure plunges by 24 milibars in 24 hours by 12noon today, qualifying it as a 'weather bomb.'

Weather maps show 1,000 mile-wide Ciara being catapulted across the Atlantic, bringing 30ft waves to the South-West and North-West coasts and 50ft waves offshore. 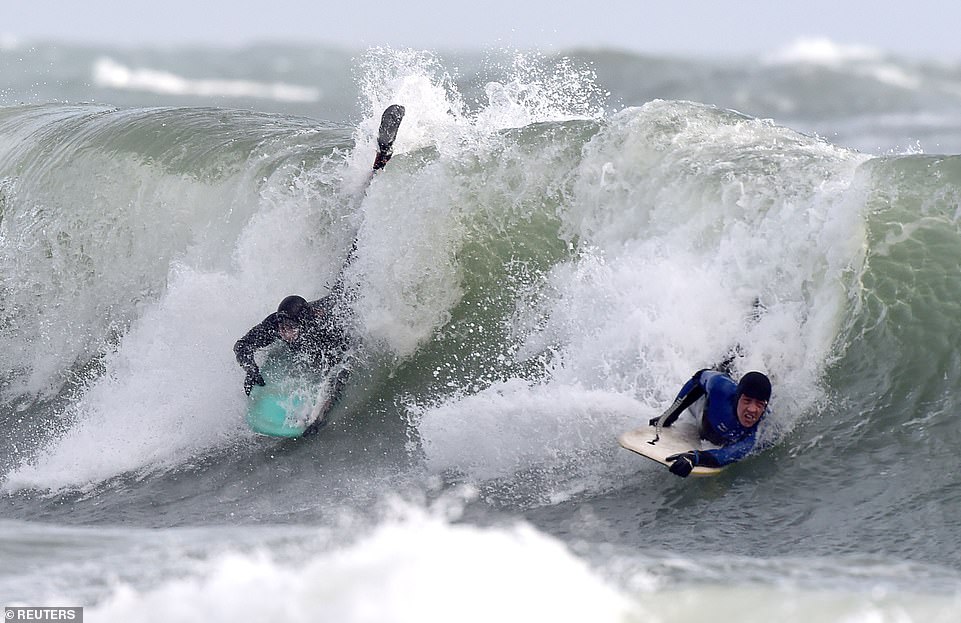 Hundreds of flights into and out of European airports were cancelled as Britain's biggest storm in seven years swept into Scotland and the rest of the UK was put on warning for 90mph winds. Pictured: Surfers take advantage of stormy waves in Pembrokeshire, Wales on Saturday 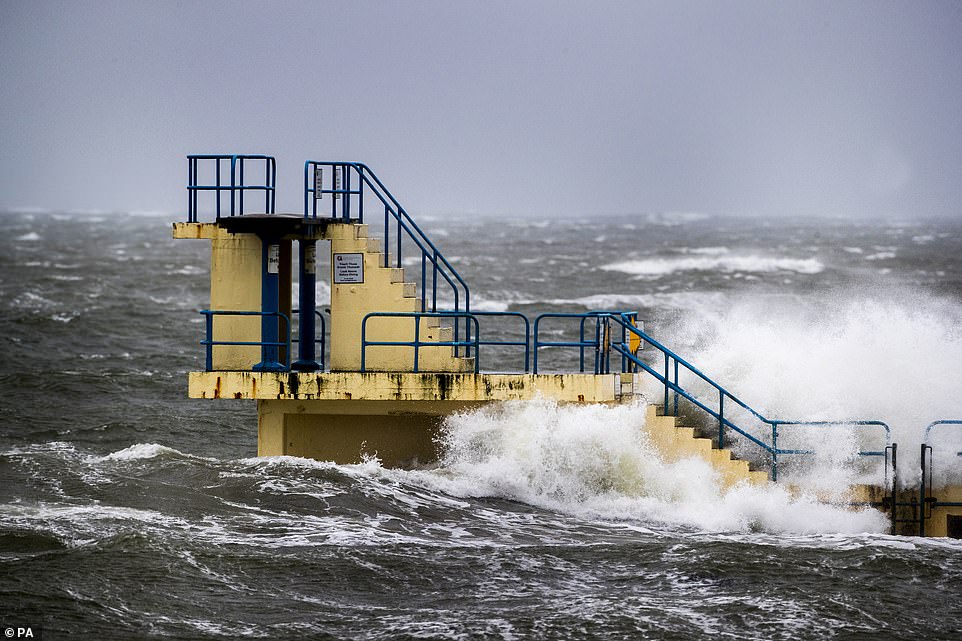 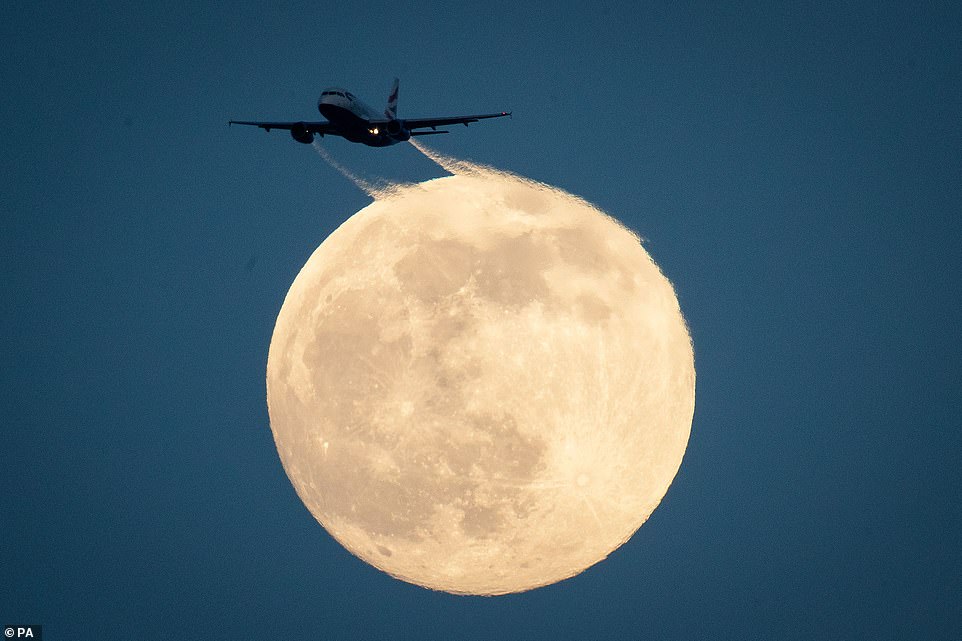 London's Gatwick and Heathrow airports have both seen disruption, leaving many passengers faced with hours of chaos. Pictured: A British Airways flight sweeps across a magnificent image of a super snow full moon, the name given to the time of the month when the satellite is closest to earth 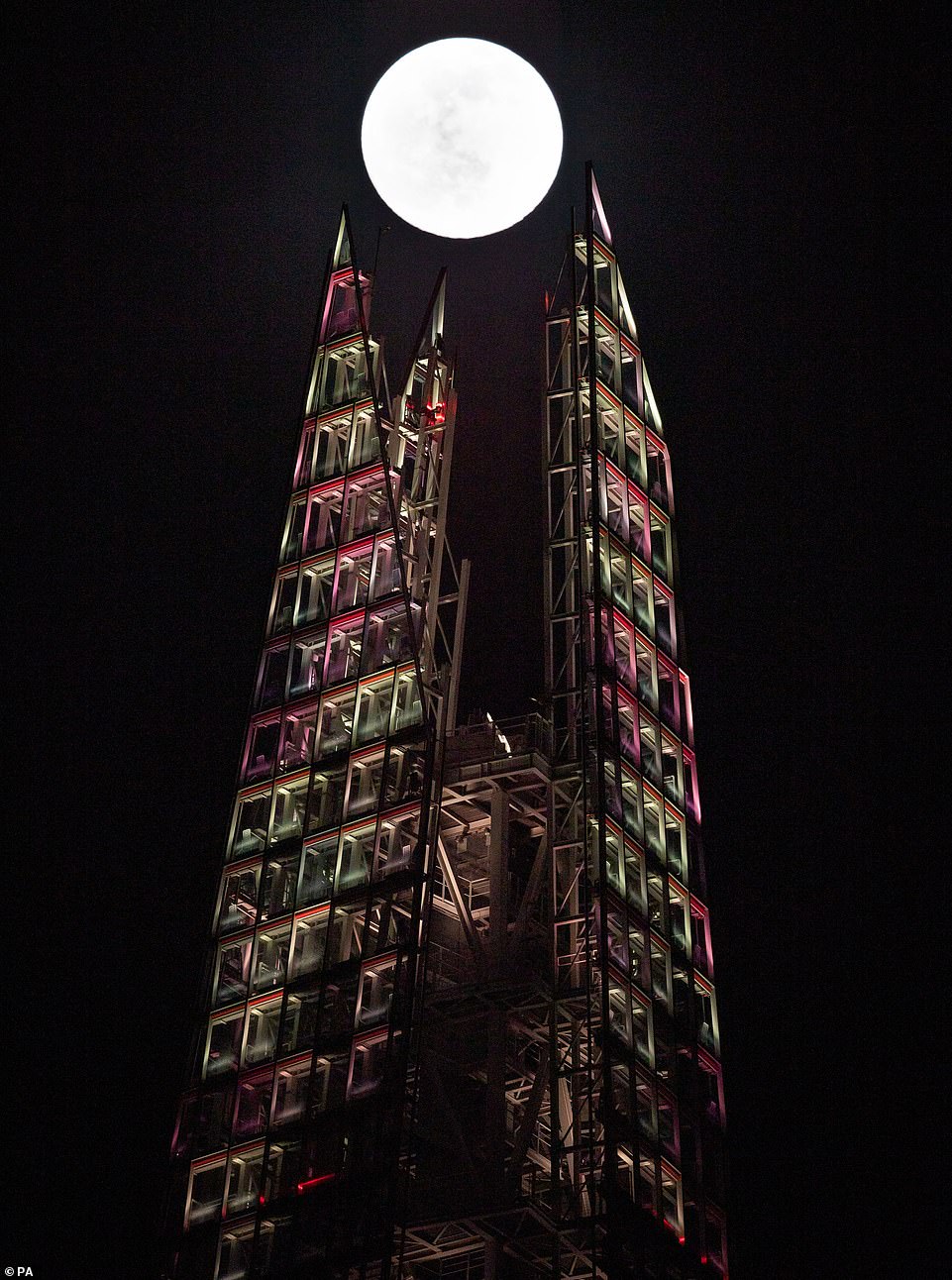 Drivers are being warned to take extra care on the roads due to the potential of difficult conditions caused by heavy rain, particularly on coastal or exposed routes.

In Scotland, the bad weather prompted officials to put in place a 40mph speed limit on the Queensferry Crossing, while ferry passengers also faced disruption, with many Caledonian MacBrayne services cancelled due to the conditions.

Robert Morrison, Caledonian MacBrayne's director of operations, said: 'Weather for the weekend is looking extremely problematic as far as delivering a scheduled timetable.

'There is a very high possibility of weather related disruption to services across all 28 of our routes so people should be aware of this before setting off on their journey.

'We will of course be looking keep sailings running when conditions allow. 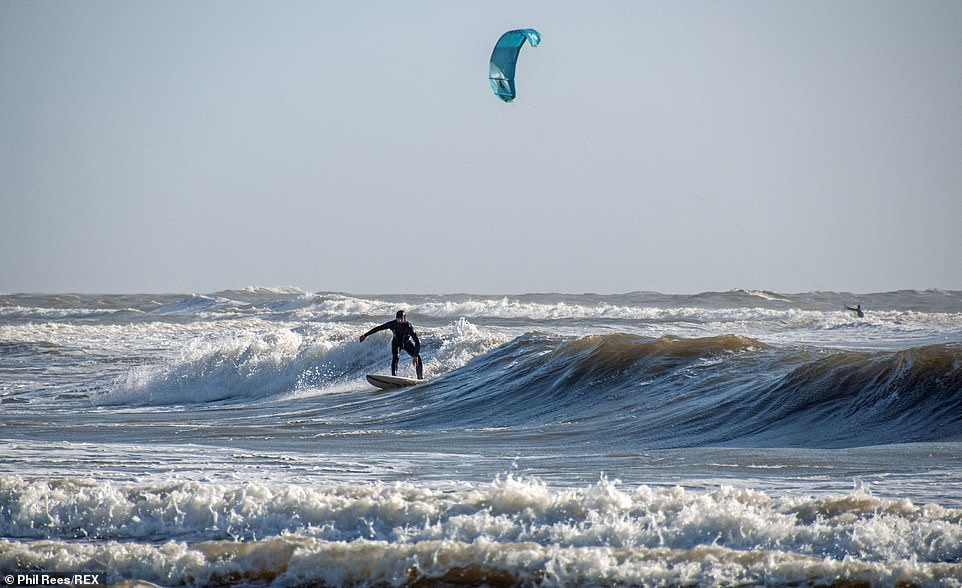 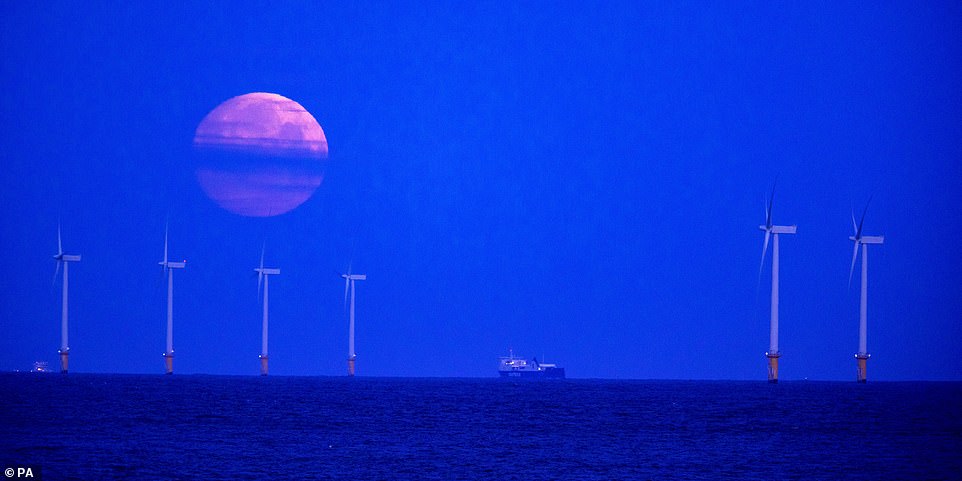 Calm before the storm: The water was flat this morning on the River Mersey, which will be one of the first parts of the country to be battered by Ciara 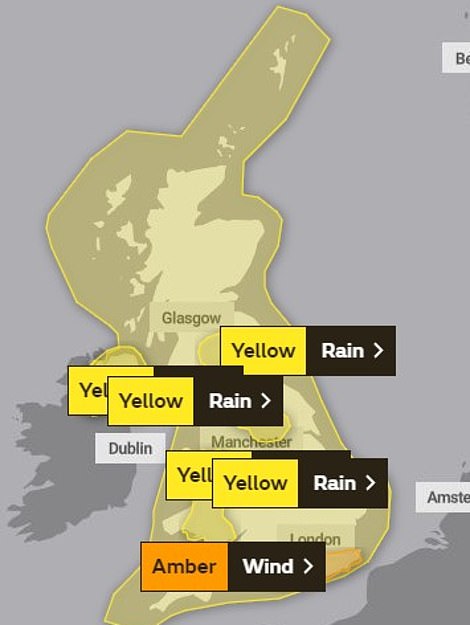 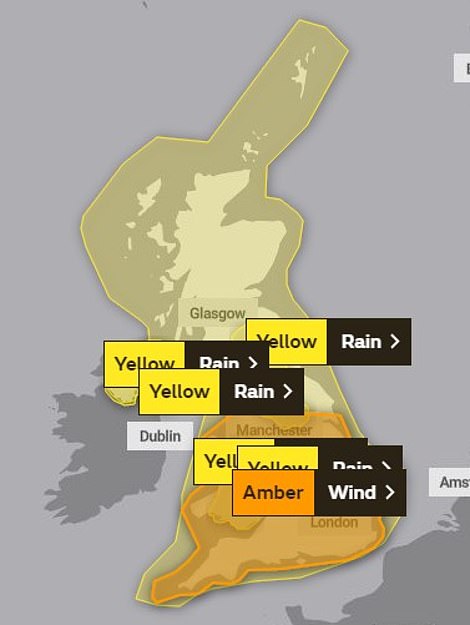 'I would urge passengers to allow extra time for their journey, keep track of the status of their sailing on the website or on social media and be prepared for delays and cancellations.'

The Met Office also warned that homes and businesses in the Scottish Borders are likely to be flooded, with a chance that some communities may be cut off by flooded roads.

An amber warning of heavy rain in the region between 2am and 10am today was also issued.

Several bridges were closed to high sided vehicles on Saturday with the Erskine, Dornoch, Skye and Kessock Bridges among those affected.

In the Highlands a lorry overturned on the A96 at Gollanfield. Police said there were no reports of any injuries.

However the road will remain closed overnight as it is not safe to recover the vehicle at the moment due to high winds. 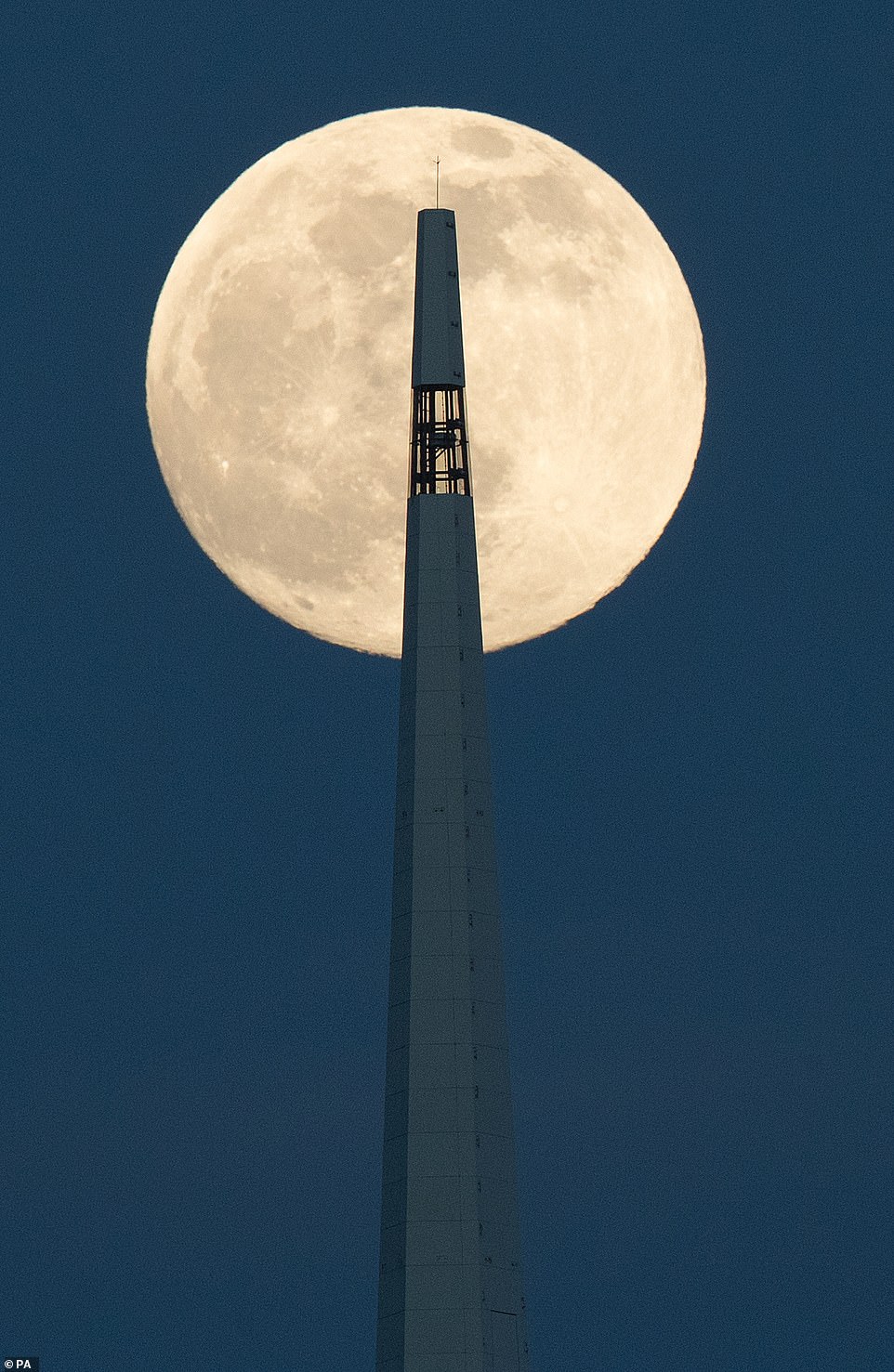 But the bad weather has been tempered by the beautiful sight of the of the full snow moon. Pictured: The moon lingers behind the Spinnaker tower in Portsmouth, Hampshire

Rail passengers faced disruption after a tree on the line blocked the route between Elgin and Keith and ScotRail said the railway line would be closed until it could be removed.

In Aberdeenshire, a coach overturned on the B9000 at the A90 slip road for Newburgh.

Yellow warnings of high winds were also in place across Scotland for Sunday.

Meanwhile Network Rail said that winds of up to 90mph are expected on the West Highland Line and the Inverness to Kyle of Lochalsh routes on Sunday and said that services will be suspended during the worst of the weather.

THESE two #NarcosMexico2 stars were related