Three siblings killed when they were mowed down by an alleged drunk driver as they walked to get ice cream will be farewelled today.

Sienna, 8, Angelina, 12, and Antony Abdallah, 13, died at the scene in Oatlands, in Sydney's northwest last Saturday night, alongside their 11-year-old cousin Veronique Sakr. Three other children were seriously injured.

Hundreds are expected to pack the Our Lady of Lebanon cathedral in Harris Park on Monday morning to remember the three children, whose deaths shocked Australia.

Samuel William Davidson, 29, was allegedly three times the legal blood alcohol limit when he drove into the group of seven children. 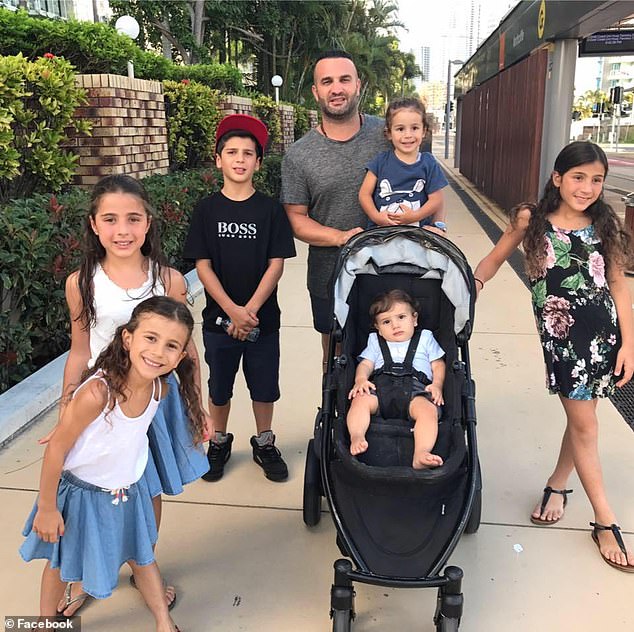 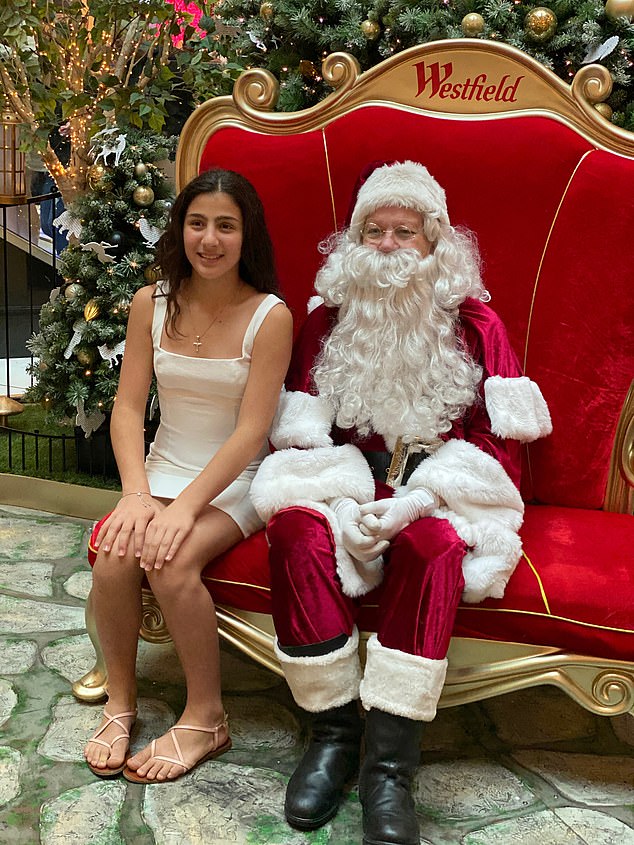 Angelina Abdallah, 12, (left) who was also killed when they were allegedly hit by a drunk driver allegedly three times over the legal drink-drive limit 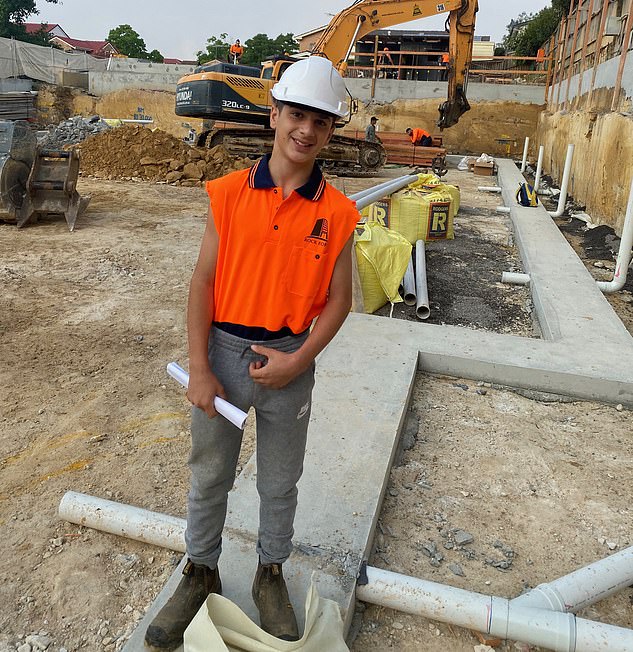 Pictured: Antony Abdallah, 13, killed in the horror crash as he and his siblings went to get ine cream on Saturday evening in Sydney's western suburbs

Their parents Danny and Leila Abdallah say they have been amazed by the incredible outpouring of support from family, friends and strangers since the tragedy.

Thousands of bouquets of flowers line the footpath along Bettington Road where the three children and four of their cousins were hit as they walked to get ice cream.

Mr and Mrs Abdallah have pledged to forgive Samuel William Davidson, the alleged drunk driver charged with killing three of their kids.

This is despite police alleging Davidson had a blood alcohol content of 0.150 when he lost control of his 4WD.

Despite publicly being incredible stoic in the days since the accident, Mr and Mrs Abdallah last week admitting the 'cross they are carrying has become 'very heavy'. 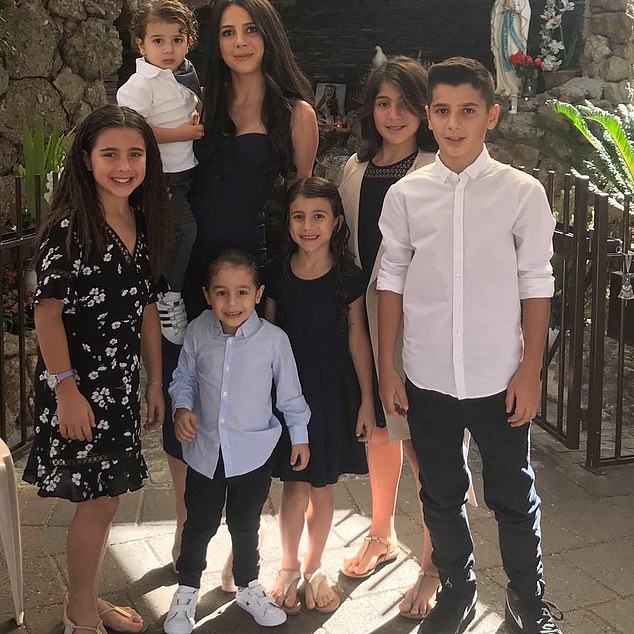 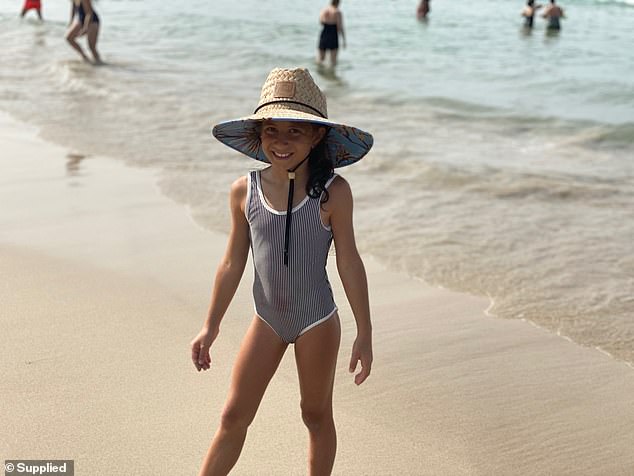 Gone too soon: Sienna Abdallah, eight, (pictured) was described by her father Daniel as his 'little diva' as he spoke to reporters the morning after the horrific crash

Devastated family and friends packed into the same church on Friday evening to pay their respects to the Abdallah and Sakr family at a memorial service.

David Mannah, a cousin of Danny Abdallah - father of Sienna, Angelina and Antony - said his family were 'running out of tears'.

'I have never heard of a family losing three children in this manner,' Mr Mannah told the Daily Telegraph.

'All of those emotions just hit you every morning. Danny and Leila wake up without their three children.

'They are obsessed with their children'.

Mourners were photographed lining the stairs as they waited to pay their respects following the devastating loss of lives. 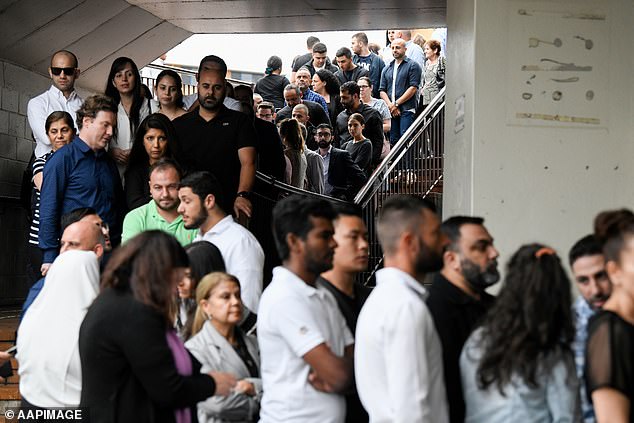 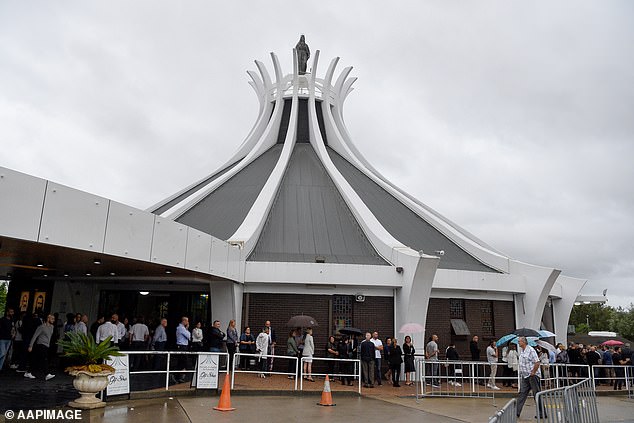 NSW Opposition Leader Jodi McKay was among the hundreds of attendees at the condolences, which were held from 6 to 9pm.

The guests, who were typically dressed in dark shades for the service, found comfort by greeting each other with hugs and kisses.

Hundreds of people have already visited the crash site to pay their respects and lay flowers for the children.

One of grieving dad Danny Abdallah's lasting memories of his two girls killed in the Oatlands tragedy is a father and daughter camping trip he shared with them last winter.

LETTER FROM DANIEL AND LEILA ABDALLAH

On Saturday the 1st of February 2020 at approximately 7.50pm, our entire world came crumbling down with the senseless loss of three of our six children, Antony, Angelina and Sienna.

To begin to encapsulate or express the heart wrenching pain and sorrow we are experiencing in this time would require endless words of despair. This is an unimaginable tragedy; unfathomable beyond all description.

Our children are our reason for living. Bringing them up in accordance with the ways of God, teaching them to love, affording them every opportunity and nurturing them into positive and impacting young men and women was, and is our life's purpose.

What is life without your children. How and where do we begin to pick up the pieces so that we may be effective parents to our three remaining angels?

We start with forgiveness.

We forgive the driver that killed our innocent children. His actions will be met before the earthly and heavenly judge. We have decided, in our hearts to forgive him – for our sake, for the sake of our children and more so for Christ's sake.

Our faith in Jesus Christ remains the foundation of our family and we believe it will continue to help us through this difficult time.

Each day that passes is a day closer to the day we are reunited with our angels. We will look toward this moment; not backwards at yesterday's pain.

As we've tried to make sense of the past week, the world too has been shaken by this mortifying event. It is our hope that through this, all will know that no matter the pain or despair, God will be a safeguard through this dark valley.

He is in control, and eternity sits in the palm of His divine hand. Our life here on earth is but a vapour in comparison to His eternal plans, and the purpose God holds for His children.

We would like to thank our family, our friends, our community, and so many others from across Australia and the world, for the overwhelming support we have received.

We are humbled and strengthened by the outpouring of love from each and every one of you.

Please continue to join us in prayer during this time, this is a very heavy cross that we've been chosen to carry, but it is through God's love that we keep going.

May the Peace of God through Jesus Christ be with us all,

Mr Abdallah took Angelina, Sienna and their surviving sister Leanna, 10, on a weekend away to regional New South Wales in July last year.

Now, the memories of that happy holiday are getting him through the grief of losing three children.

Videos from the weekend away show the three girls smiling and giggling as they ride motorbikes, take photos of unique Australian wildlife and watch movies by a roaring fire.

Naga Munchetty shut down by cheeky WWII veteran: 'I can’t say a word back' ...