A burlesque dancer who was accused of grooming a 13-year-old boy and saying she had 'dibs' on his virginity has flashed her breasts on a busy city street when confronted by a TV crew.

Bethany Edgecombe, who uses the online persona 'Blondie,' admitted to sending the Queensland teenager sexually explicit messages and nude photos on Instagram when approached by A Current Affair this week.

The 20-year-old, who regularly posts provocative photos to her 100,000 followers, initiated conversation via private message after he mentioned her in one of his posts.

When confronted by a TV crew in central Melbourne, the exotic dancer initially laughed at claims she was grooming the boy, but eventually admitted to sending him inappropriate messages.

'What would you like to say to this boy's parents?,' reporter Dan Nolan asked.

'Thank you, that is my comment,' she said, and lifted up her crop top to expose her breasts in the middle of a busy road in broad daylight.

While Blondie admitted she sent the boy sexually explicit messages, she claimed she was not serious about meeting up with him.

'Did I ever see the boy though? Have I ever seen the boy or is it just silly harmless chatting?... That's how I see it,' she said.

When asked how many other underage teens she had sent nude photos to, she responded: 'It actually only was this one boy.'

No charges have been laid against Blondie, but Queensland Police said in a statement investigations were continuing.

Blondie was accused of texting the teenager nude photographs while he was at the movies with his mother. 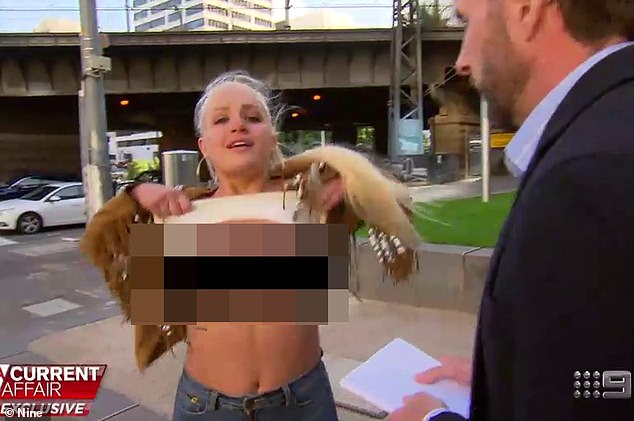 'Thank you, that is my comment,' she said while lifting up her crop top to expose her breasts in the middle of a busy Melbourne street in broad daylight when confronted by reporters

Text message receipts show Blondie asking the boy to sneak off to the bathroom.

'Now... Show me what I do to you? Sneak off to the bathroom bad boy. Sneak off and don't tell your mummy,' she wrote.

When Nolan showed the speechless

Brexit warning to Boris as Tory MP threatens to turn against PM over EU ...