Dying soldier, 78, battles to halt trial over allegations a man was 'murdered' by British troops in Ulster 46 years ago Dennis Hutchings, 78, is accused of murdering John Pat Cunningham in 1974 Hutchings, who has kidney failure and heart disease will stand trial on March 9 Yesterday he launched a crowd funding campaign to pay for his legal defence  He warned NI secretary Julian Smith he is seeking a judicial review over the case

By Ian Drury for the Daily Mail

A dying Army veteran facing trial over a fatal shooting in Northern Ireland 46 years ago has launched a legal battle against the Government to halt the controversial case.

Great-grandfather Dennis Hutchings, 78, is facing charges over the death of 27-year-old John-Pat Cunningham, who he suspected of being an IRA member, in June 1974.

Despite no fresh evidence, no witnesses and no new forensic leads, the retired soldier – cleared twice of the killing – has been accused of attempted murder. 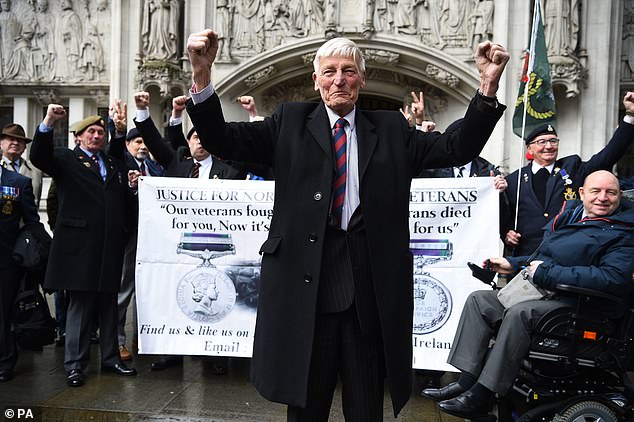 Veteran Dennis Hutchings, pictured, who is facing a murder trial over the death of 27-year-old John Pat Cunningham in Northern Ireland in June 1974 has warned Northern Ireland secretary Julian Smith he will take a judicial review to halt the case

Critics claim his case is proof of a ‘witch-hunt’ against soldiers who served during the Troubles.

The Daily Mail has long campaigned for an end to the hounding of our heroes. Mr Hutchings, who is seriously ill with kidney failure and heart disease, is due to stand trial on March 9.

But yesterday he launched a crowd-funding drive for his legal battle. Mr Hutchings, from Cornwall, said: ‘I spent 26 years serving my country and now I am being hung out to dry like a common criminal.

‘I want to put the Government in a position where they make good on their promise to protect veterans from these ludicrous witch-hunts so no one else is thrown to the wolves.

‘It is disgusting. I’ve spent five years’ on

'We're just like you': Here's what Mardi Gras means for LGBTQI+ Muslims

Inside the island farm running cattle and sheep on swampland