Fugitive who escaped from a Georgia sheriff's office through a CEILING LIGHT is tracked down in Alabama after leading cops on a frantic interstate hunt Gregory Keith Wyatt, 34, was being held at Haralson County Sheriff's Office on a number of charges He escaped the facility through a ceiling light on Monday night, prompting a frantic widespread search The fugitive was tracked down Tuesday evening in Alabama and was involved in a subsequent standoff with police 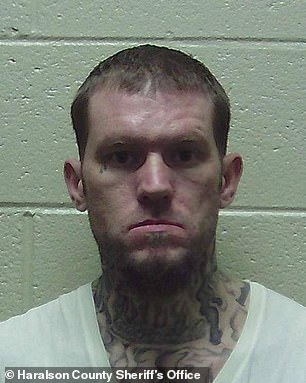 Gregory Keith Wyatt, 34, from a Georgia sheriff's office on Monday, before being tracked down 24 hours later in Alabama

An inmate who escaped from a Georgia sheriff's office through a ceiling light has been tracked down and rearrested 60 miles away in Alabama.

Wyatt had been in custody since last June on a number of charges, including reckless driving, hit and run, and failure to stop at the scene of an accident.

On Monday night, he managed to flee confinement by climbing up

PREV Woman arrested on suspicion of murder after man plunges to his death from a ...
NEXT Simone Biles shares powerful message on combating beauty standards for new campaign