Rapper Slowthai hurls 'champagne glass' into NME awards crowd in ugly confrontation as audience members confront him over lewd comments made on stage to Katherine Ryan Slowthai threw his microphone into the audience only to have it thrown back  Ugly exchange followed and he hurled what appeared to be a champagne glass  Rapper, 25, then jumped off the stage and lunged at a member of the audience Bouncers restrained him and it followed him leering at host Katherine Ryan

This is the moment Slowthai appeared to throw a champagne glass at the audience during an altercation at the NME Awards.

The performer threw his microphone into the crowd, only to have it thrown back it him.

He reacted by launching his drink at a person he was rowing with, before leaping off the stage at them. 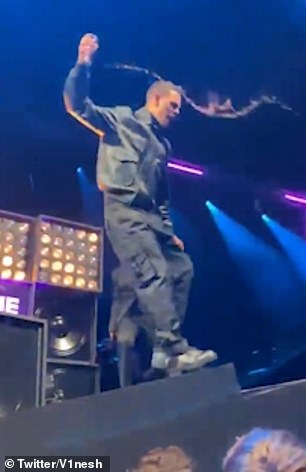 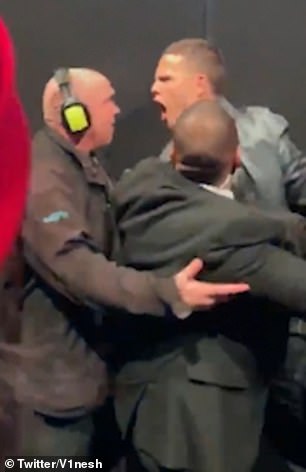 The rapper, 25, can be heard shouting 'what' over and over again as bouncers restrained him after his performance earlier in the evening with Mura Masa.

The ugly scenes followed bizarre exchange with the comedian