A video of Meghan Markle in a sparkly hat and blowing a party whistle was branded 'crass' today as it was released hours after it was revealed the couple will close their Buckingham Palace office and axe 15 British staff.

The British Vogue behind-the-scenes film of the Duchess and editor Edward Enninful is another sign the couple have dumped their experienced London team for 'Hollywood PRs' who will 'monetise' the Sussex Royal brand, experts have told MailOnline.

Richard Fitzwilliams, royal commentator and former editor of International Who's Who, said: 'It's a case of blowing your own trumpet, or party horn in this case, at the wrong time. This should normally have been fun to watch but her timing is excruciating. She simply doesn't care and doesn't care who knows it'.

Prince Charles' biographer Tom Bower told MailOnline the move shows that 'Meghan has placed herself in the clutches of Hollywood style celebrity promoters'.

He added: 'Unlike her ex-British staff who were sensitive to the requirements of the royal family, her new PR fixers are intent on exploiting and monetizing every opportunity to promote the Meghan brand, regardless of any embarrassment she causes to the Queen'. 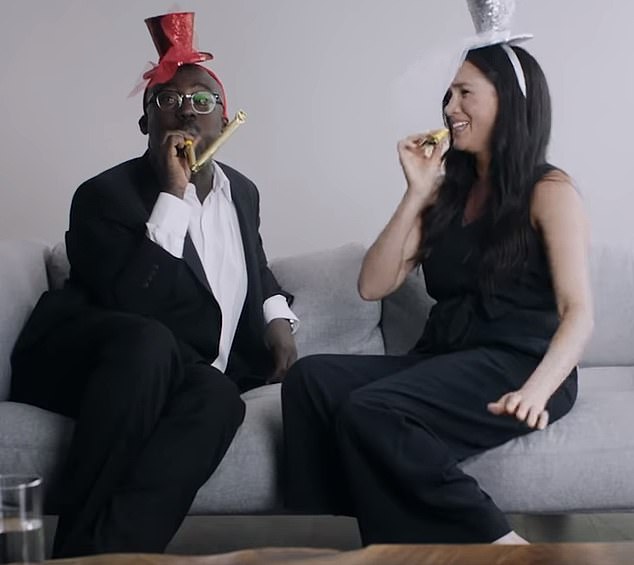 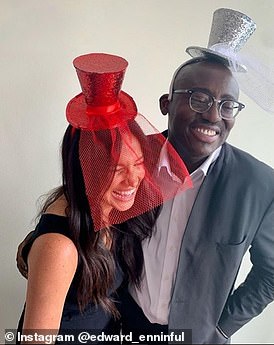 Meghan Markle is seen in fits of giggles in a candid snap shared by British Vogue editor Edward Enninful from behind-the-scenes of their Forces for Change issue last year.

The Duchess of Sussex, 38, 'surprised' Enninful with an impromptu celebration to mark their collaboration on the September edition in an unseen video shared last night.

She handed the fashion designer a sparkly party hat and horns as a thank you for agreeing to let her be the first ever guest editor of the magazine.

In the two-and-a-half minute clip posted to the

Earlier today @edward_enninful, the Editor in Chief of @britishvogue shared: “#ForcesForChange, guest edited by The Duchess of Sussex @SussexRoyal, was our fastest-selling issue in the history of #BritishVogue ( sold out in 10 days) and the biggest-selling issue of the past decade. I can't wait to see what 2020 has in store...” • To celebrate, we wanted to share this never before seen video behind the scenes with Edward and The Duchess of Sussex on the creation of this special issue. Please note, this was filmed last August in London. Congratulations to all of those who took part in the 2019 September issue, and huge thanks to those who supported and helped make this a success! Video credit: Directed by @kloss_films Copyright @sussexroyal

Instagram page, the duo called up the women Meghan selected to be on her front cover.

Enninful also praised the duchess for her 'editor's eye', claiming: 'I've never seen anything like it. You were so thorough from beginning to end.'

The video, which was filmed in London in August last year, begins with Enninful revealing he received a text from Meghan asking him to help her with her Smart Works project.

He recalled being 'so excited' as he walked into Kensington Palace, to which Meghan replied: 'Oh my gosh.'

Enninful said: 'I was like, "Lovely to meet you, Duchess." And you were like... "Call me Meghan!"

After he agreed to work with her on her charity project, Meghan told how she decided to see if she could 'push it just a little bit more' and ask him if he was willing to let her guest edit an edition of Vogue.

The couple's decision to make their British team redundant is the surest sign yet that they and their son Archie are unlikely ever to return to the UK to live - news that will be 'devastating' to the Queen, it has been claimed.

Many of the Sussexes' 15 staff were recruited after their 2018 wedding - some joined just months before they decided to quit as senior royals while staying in Vancouver over Christmas.

And today Harry and Meghan's official Sussex Royal Instagram account released unseen photographs and video in tandem with British Vogue as it emerged the British workers will lose their jobs.

Phil Dampier, author of Royally Suited Harry and Meghan In Their Own Words,  suggested the couple's decision to axe their large London team was 'breathtaking'.

He said: 'The speed with which Harry and Meghan are cutting ties with the UK and the royal family and setting up their new life in North America is breathtaking and it makes you realise they have been planning a lot of this for many months.

'I'm sure the Queen will be devastated as it seems there is no way back for them and it will make it very difficult for them to return on the rare occasions when Harry is needed for a big royal event'.

And on the British Vogue social media posts he said: 'It might go down well with some younger people, in the US and with those in the fashion industry. But to me it comes across as fairly vacuous, self-serving and shallow.  Her fans may love it but a lot of people will find it a bit false'.

The couple's team are said have been 'shocked' by the decision especially having done their best against a backdrop of multiple international advisers, publicists and high-profile friends' acting for them, royal insiders have said.

Kensington Palace has declined to comment on the story.

The Duke and Duchess of Sussex broke the news to their team in person in January following the announcement that they were stepping down as senior working royals.

While one or two may be absorbed back into the royal household, most are now negotiating redundancy packages.

They are the latest casualties of Harry and Meghan's bombshell decision to move to North America and make their fortunes outside the Royal Family.

Last night Buckingham Palace said it did not comment on staffing matters but it is understood senior royals, including the Queen, Prince Charles and Prince William are aware of the office closure and redundancies.

A source told the Mail: 'Given their decision to step back, an office at Buckingham Palace is no longer needed. While the details are still being finalised and efforts are being made to redeploy people within the royal household, unfortunately there will be some redundancies.' 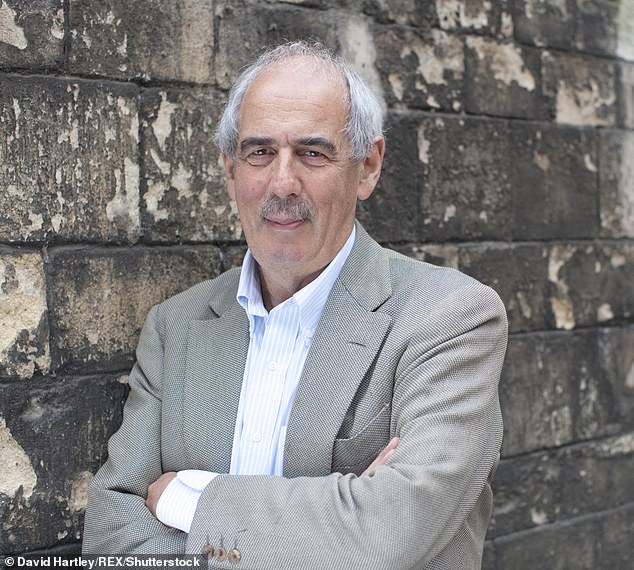 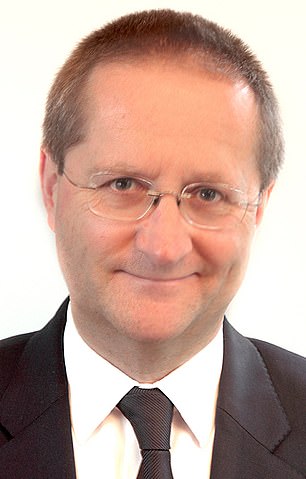 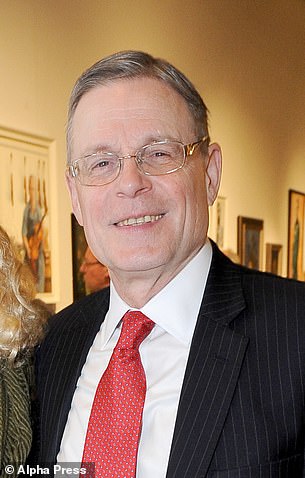 Among those to lose their jobs are the couple's newly appointed private secretary, Fiona Mcilwham – although she is on secondment from the Foreign and Commonwealth Office and is likely to be found in a role in Whitehall – and their hugely experienced communications chief Sara Latham.

Harry's long-standing programme co-ordinator Clara Loughran, who was so well regarded by the prince that she was asked to hand Meghan her bouquet in church on her wedding day, will go.

As well as Miss Latham – who previously worked for the Obamas and was Hillary Clinton's senior campaign adviser – her deputy, assistant communications secretary Marnie Gaffney, is leaving.

A much-loved and long-serving member of Buckingham Palace press staff, she played a major role in supporting Harry on his military work and organised his and Meghan's hugely successful official tours to Australia and Africa.

The Duchess of Sussex, 38, handed the fashion designer a sparkly party hat and horns as a thank you for agreeing to let her be the first ever guest editor of the magazine

Friends said today Ms Gaffney was offered another role at Buckingham Palace, but had decided to accept the redundancy package offered.

A source said: 'She had the option to go back to the Palace, and they wanted her to stay.

'But she decided it was a natural ending after a decade with the royal household.

The Queen made her a member of the Royal Victorian Order because of her devoted service.

Fiona McWilwham, Private Secretary to the Duchess of Sussex, is pictured in an undated photograph. Among those to lose their jobs are the couple's newly appointed private secretary, Fiona Mcilwham – although she is on secondment from the Foreign and Commonwealth Office and is likely to be found a

Drinking just two cups of milk a day 'can increase the risk of breast cancer in ...

Amy Hart and Jade Thirlwall turn out for the gala night performance of The ...