Cops use forensic genealogy to track down and charge mother, 54, over the cold-case death of newborn 'Baby Michael' who was thrown from a moving car 21 years ago 'Baby Michael' was found dead in a plastic bag at the side of a road in March 1999 in Fayetteville, North Carolina  His umbilical cord was still attached and it was determined he died from blunt force trauma after he was thrown from a moving car Police pleaded for the parents to come forward, but no one ever did and the case went cold Detective recently sent DNA to a forensic genealogy firm that developed a family line for 'Baby Michael' When police questioned Deborah Riddle O'Conner, 54, she admitted to being the newborn's mother She was arrested on Thursday and charged with first-degree murder, and is currently being held with no bond

By Mary Kekatos For Dailymail.com and Associated Press 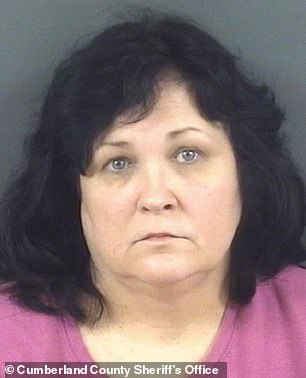 Deborah Riddle O'Conner, 54 (pictured), was arrested and charged with first-degree murder after she admitted to being the mother of 'Baby Michael'

Authorities in North Carolina say they have solved a 21-year-old cold case after they tracked down a woman accused of killing her newborn son and dumping his body alongside a road.

Deborah Riddle O'Conner, 54, was arrested on Thursday and charged with first-degree murder, according to the Cumberland County Sheriff's Office.

Investigators allege O'Conner, gave birth to the baby boy, nicknamed 'Baby Michael,' before placing him in a trash bag and tossing him from a moving car.

The infant died of blunt force trauma, the Sheriff's Office said in a news release.

On March 3, 1999, a solider saw a plastic bag on the side of Canady Pond Road that he thought contained a doll, reported The Fayetteville Observer.

Instead, he found a dead newborn - not even a day old - with the umbilical cord still attached.

According to The Observer, the infant had a fractured skull, pelvis and spinal column as well as lacerations to his liver and one