Cyclone brewing off the coast of Australia is gaining momentum and set to drench parts of the country with torrential rain and dangerous 'storm surges'  A cyclone brewing off the coast of QLD and NT is expected to hit Australia  Prior to reaching land, it is expected to become a category two tropical cyclone  It is forecast to reach the Northern Territory on late Sunday or early Monday It will send heavy rain fall and destructive winds into parts of the NT and QLD

A cyclone brewing off Australia's north coast is expected to cause extreme weather when it hits the shore in coming days.

Residents of Mornington Island in the Gulf of Carpentaria are on alert for a tropical cyclone that could form later on Saturday.

The Bureau of Meteorology says the weather system - which will be named Esther if it forms - could bring destructive winds and up to 200mm of rainfall. 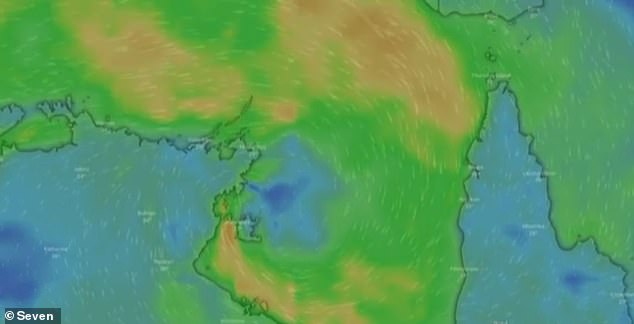 A cyclone is expected to reach Australia's northern shore in coming days, bringing heavy rain fall and destructive winds to the region

It is likely to see damaging winds, even possibly destructive winds during late Sunday and Monday,' he said.

'We will see a storm surge over Mornington Island and the southern parts of the Gulf of Carpentaria.'

If the cyclone reaches the mainland, it is forecast to make landfall in the Northern Territory, northwest of Wollogorang, between Centre Island and the Queensland border.

The Bureau of Meterology said, at this stage, the system is expected to intensify into a category two tropical cyclone prior to making landfall.

It is expected to cross around 11am on Sunday as a category two tropical cyclone before weakening to a category one by Monday evening.

A Bureau of Meterology spokesperson told Daily Mail Australia that there will be heavy rainfall, damaging destructive winds and storm surges along the coast line.

'Storm surge, the mass of water that is pushed on shore is typically one of the major impacts or dangers of tropical cyclones,' he said.

'It is what has killed the most people globally. In this part of the world that can be particularly dangerous. 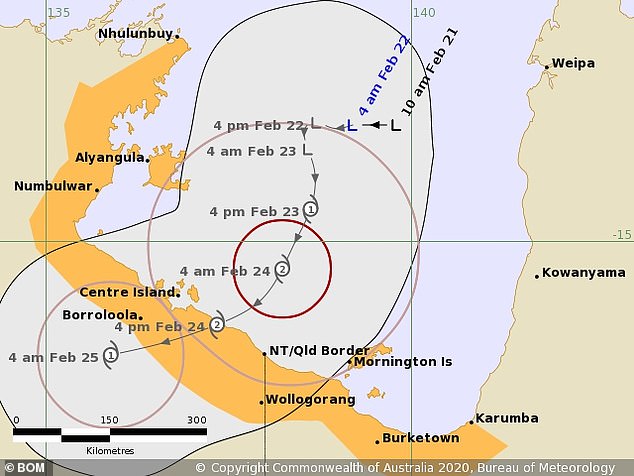 'If the crossing [of the cyclone] coincides with a high tide it can be particularly dangerous, which can be a problem in this part of the world.

'It is fairly sparsely populated there so thankfully there is not as big a risk to infrastructure.'

The Bureau of Meteorlogy has warned that gales could potentially develop about coastal and nearby adjacent inland communities between Nhulunbuy and Karumba, including Mornington

Self-driving vans are ferrying coronavirus tests from drive-thru sites to a ...