The New York City Mayor was talking about a recently resurfaced speech his predecessor made in 2015 in which he described how police targeted minorities who had to be thrown 'up against the wall' to be disarmed.

De Blasio told Fox News that Bloomberg was 'totally out of touch with the people of his own city' when he made the comments to the Aspen Institute in which he defended his controversial stop and frisk policies.

Bloomberg was heard in the tape from 2015 saying: 'We put all the cops in minority neighborhoods. Yes, that's true. Why do we do it? Because that's where all the crime is.

'Ninety-five percent of murders, murderers and murder victims fit one M.O. You can just take a description, Xerox it, and pass it out to all the cops.'

He went on to say that 'the way you get the guns out of the kids' hands is to throw them up against the wall and frisk them'. 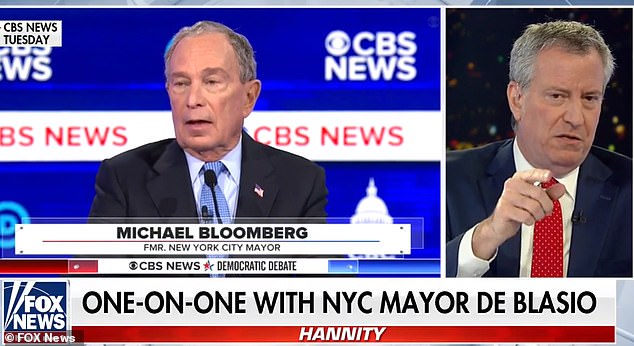 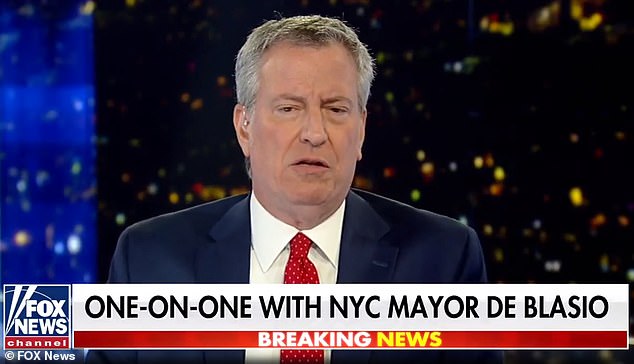 Appearing on Fox News, current New York Mayor Bill de Blasio said Bloomberg was 'totally out of touch with the people of his own city'

Host Sean Hannity asked the Democrat, who previously dropped out of the race to win the presidential nomination: 'Is that [Bloomberg's remarks] racist to you?'

He replied: 'Oh sure, Sean. And thank you for playing that for your millions of viewers, because now more people get to see who Mike Bloomberg really is.'

De Blasio added that because of Bloomberg's expansion of stop and frisk use during his time in office from 2002 to 2013, it made policing in minority areas much harder.

He added: 'He [Bloomberg] is totally out of touch with the people of his own city when he says that [his 2015 comments]. It's derogatory, it's unfair, it's not truthful.

'But on top of that, what happened? It made it harder for the police and the community to communicate and be on the same page.

'It created tons of pain for parents, grandparents, trying to bring up their kids the right way.

De Blasio, who endorsed Bernie Sanders for the Democratic nomination, also slammed Bloomberg as someone

PREV Fly-tipping waste rises 300% because of staff shortages at tips amid ...
NEXT Half-mile tunnel filled with over 4,000 pounds of drugs found near San Diego

Coronavirus survivors give Boris Johnson a message of hope as Prime Minister ...