The EU is on 'high alert' after more than 30,000 migrants at Turkey's border with Greece and Bulgaria pelted guards with stones and tried to cut through the wire fences.

Turkey's President Recep Tayyip Erdogan said 18,000 migrants have already crossed into Europe, with the number expected to reach 25,000 to 30,000 in the coming days.

Greek police closed their border crossing yesterday and lined up to fire tear gas at large groups, while pregnant women and children were among those making hazardous crossings to the Greek islands. Bulgaria also locked down its southern border and deployed soldiers and military vehicles to patrol its 118-mile frontier with Turkey.

The European border force Frontex said this morning it was on 'high alert' and had stationed staff along both borders and in the Greek islands.

The surge of migrants comes as President Erdogan announced he had 'opened the doors' following the killing of 33 Turkish troops in Northern Syria by the Russian-backed Assad regime. There was no immediate criticism from European nations, but the US said it was concerned about the attack on its ally. NATO called a meeting at the request of Turkey to discuss the Syria situation.

Erdogan is thought to be using the migration flow to try to pressure the EU and its NATO member states to lend him support in Turkey's military operation in Syria. 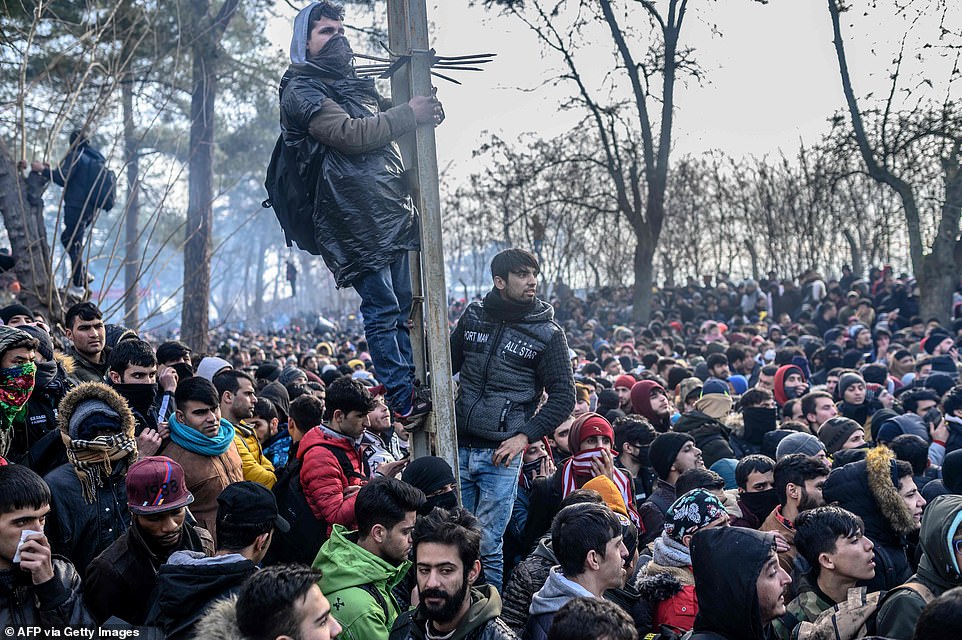 Migrants pictured gathered on the buffer zone on the Greece-Turkey border this morning. Erdogan said he had 'opened the doors' following the killing of 33 Turkish troops in Northern Syria by the Russian-backed regime 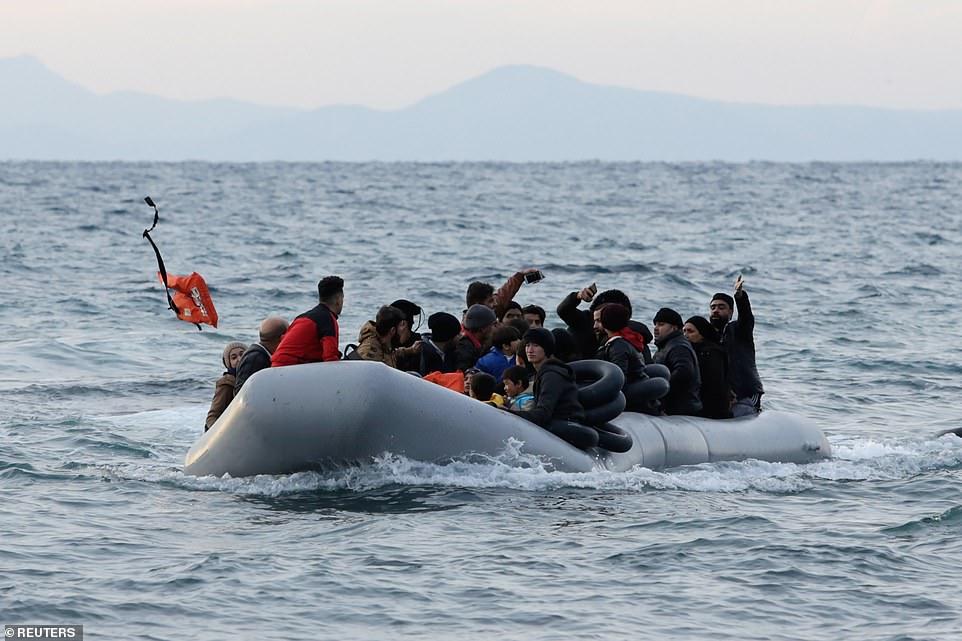 A group of migrants from Syria, Iraq, Afghanistan and Palestine arrive in a dinghy at Mytilene in Lesbos after crossing the Aegean Sea from Turkey 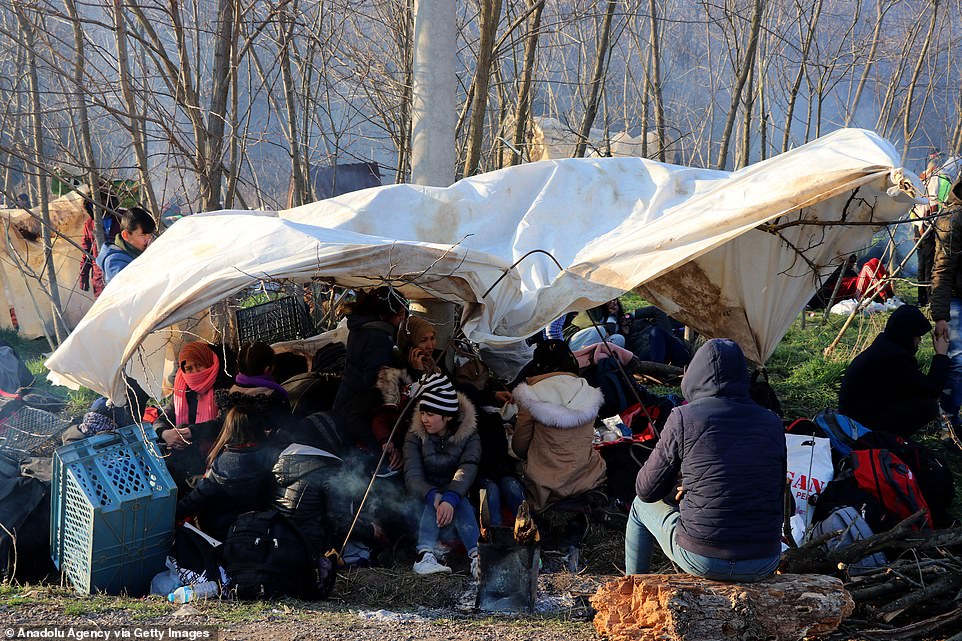 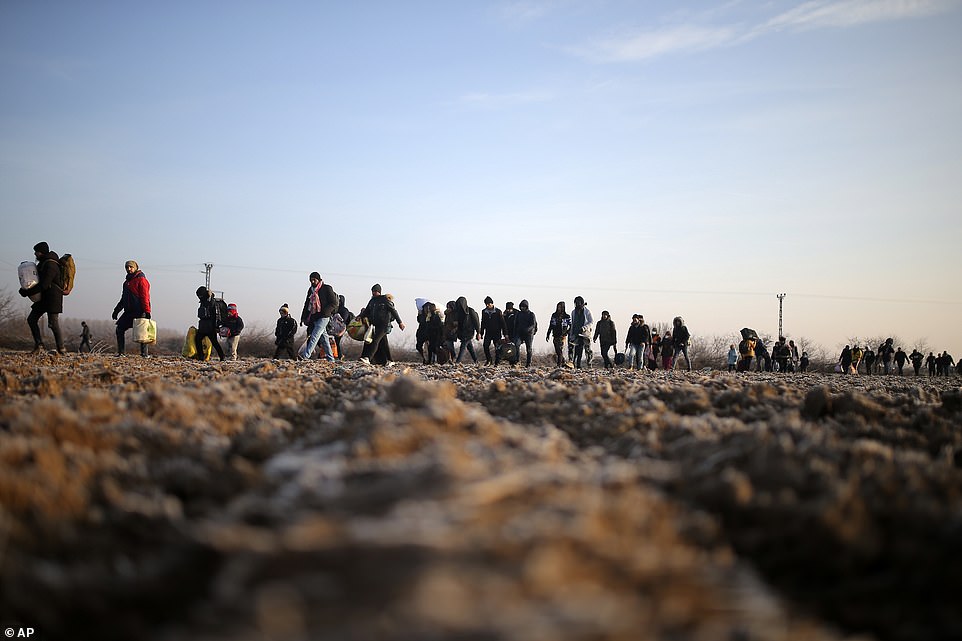 One of the first stand-offs came on Friday night at Pazarkule, north-east Greece, where hundreds of migrants – including Syrians, Iranians, Iraqis, Pakistanis and Moroccans – demanded to be let in.

The EU's border protection agency Frontex said this morning it is on 'high alert' on Europe's borders with Turkey as thousands of migrants seek to enter the bloc, adding it is deploying support to Greece.

'We... have raised the alert level for all borders with Turkey to high,' a Frontex spokeswoman said in a statement. 'We have received a request from Greece for additional support. We have already taken steps to redeploy to Greece technical equipment and additional officers.'

Frontex was also in action yesterday supporting Greece and Bulgaria along their borders. A statement said: 'We are in close contact with Greek authorities regarding additional support we can provide in this rapidly evolving situation.'

As many as 400 personnel were deployed in the Greek islands, 60 officers in Bulgaria and a further contingent in the Evros region on the Greece-Turkey border, they said yesterday. 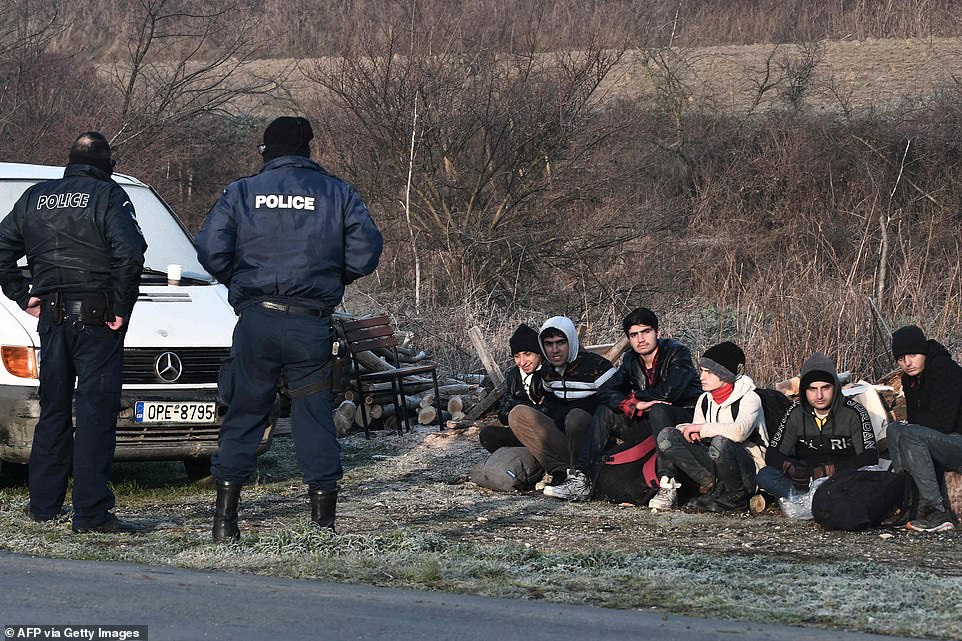 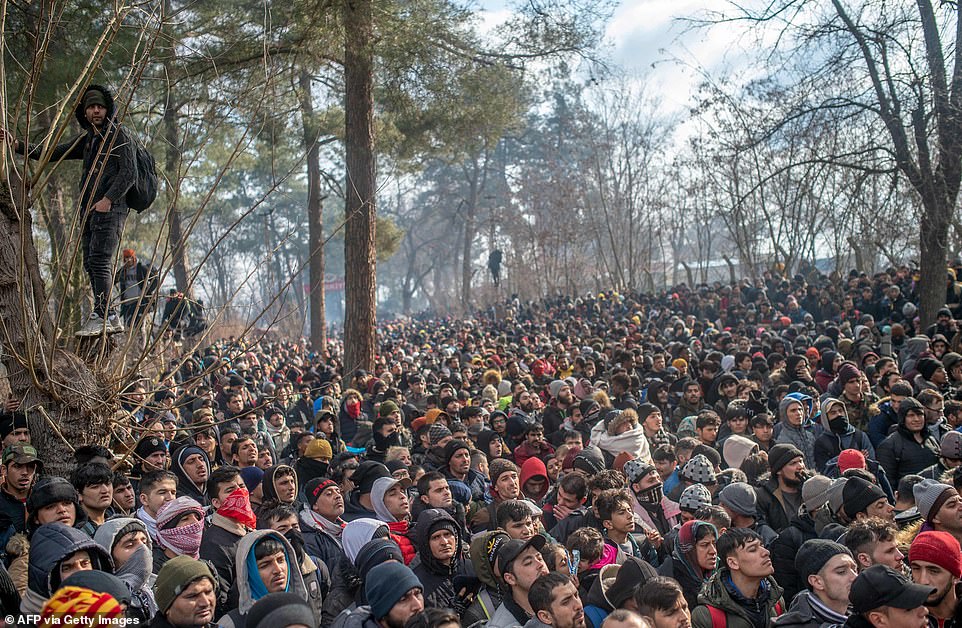 An estimated 30,000 migrants gathered at checkpoints after Turkey's president claimed to have 'opened the doors' to allow as many as 4 million asylum seekers to leave the country 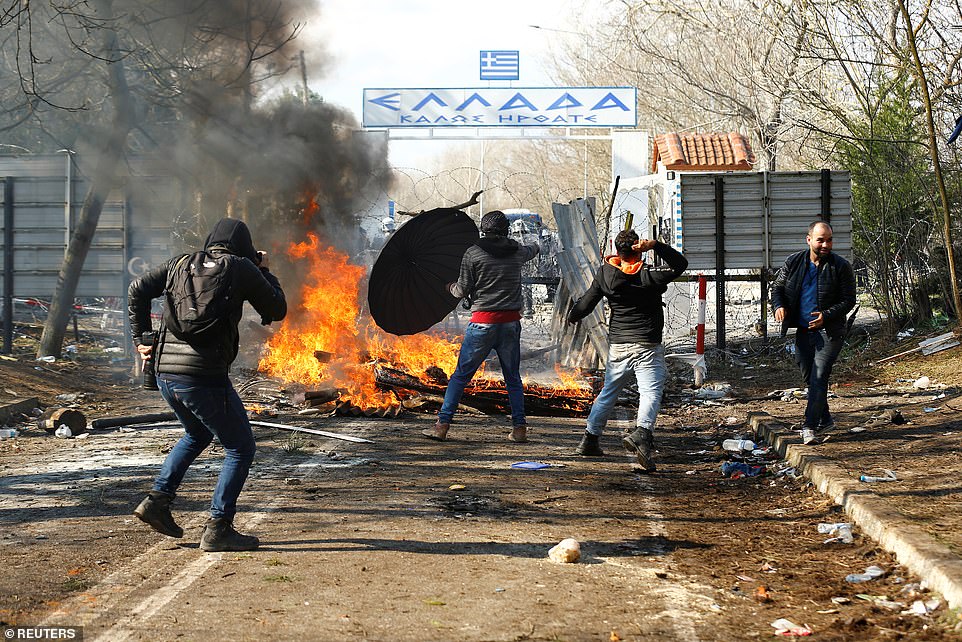 Migrants throw objects during clashes with Greek police, at the Turkey's Pazarkule border crossing with Greece's Kastanies, in Edirne, Turkey 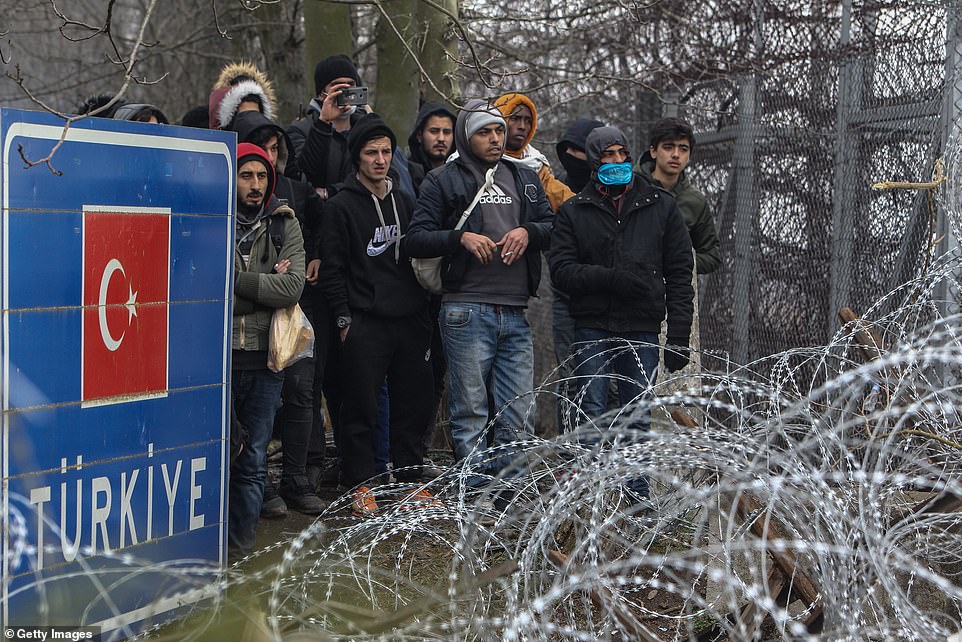 Greece said this morning it had blocked an estimated 10,000 migrants, including families and young children, from entering the country. Several boatloads of migrants arrived in Lesbos.

An estimated 2,000 further migrants arrived at the Pazarkule Greece-Turkey border this morning which included Afghans, Syrians and Iraqis.

The Greek deputy defence minister, Alkiviadis Stefanis, congratulated the country's forces on their efforts and said: 'We are protecting the borders of Greece and Europe with a firm hand'.

The EU's Commission chief Ursula von der Leyen said the block was watching 'with concern' as the commissioner for migration, Margaritis Schinas, tweeted this morning that he had requested a meeting of interior ministers to discuss the situation.

Last night a group of young men who tried to cut through the border fence were turned back by armed soldiers, while police used smoke grenades to disperse crowds.

PREV Wall St Week Ahead-RPT-Main Street leans toward Sanders, but Wall Street says Trump
NEXT People gather on their balconies in Queensland to cheer for doctors and nurses ...