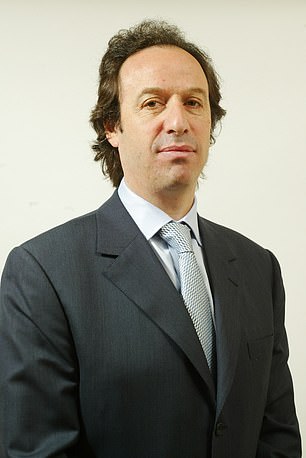 Howard Shore, pictured, urged new Chancellor Rishi Sunak not to slice into rate relief for entrepreneurs and pensions and avoid increasing inheritance tax when he delivers his Budget on March 11

Howard Shore urged new Chancellor Rishi Sunak not to slice into rate relief for entrepreneurs and pensions and avoid increasing inheritance tax when he delivers his Budget on March 11.

Instead the Shore Capital Group and Puma Brandenburg founder suggested that he take advantage of low interest rates to borrow to finance Boris Johnson's plans to boost the UK's infrastructure.

In a column in the Financial Times, Mr Shore wrote: 'Investor confidence can be fragile.

'It could easily be lost were there to be egregious tax rises in this month’s Budget.

'Cutting pension relief risks discouraging saving for old age, at the very point when the government is rightly coming up with a plan for social care in an ageing society.

'And talk of expanding inheritance tax is a huge political gamble for relatively little additional revenue. This tax is unpopular for a reason — it undermines aspiration. The people who generate jobs and prosperity in the UK are already taxed very highly, so further tax rises would send out completely the wrong message.

'It would suggest that Britain is not open for business; that the

PREV 'A huge challenge': Africa braces for a coronavirus tsunami mogaznewsen
NEXT Half-mile tunnel filled with over 4,000 pounds of drugs found near San Diego

Syria dismisses report that it was behind chemical attacks