Operation Stop ISIS: British troops are sent to Senegal to provide counter-terrorism training as new jihadi danger rises in West Africa British troops have been sent to Senegal as Jihadi danger rises in West Africa  About 30 stationed around 80 Nigerian, Moroccan and Cameroonian soldiers Royal Marines also trained members of Nigeria’s 707 special forces brigade  A Nigerian special forces lieutenant prays 'this [extremistm] will be wiped out'  US General says the Al Qaeda 'has the will and desire to attack the West'

By Larisa Brown In Senegal For The Daily Mail

British forces have been deployed to West Africa to stop it turning into an Islamic State and Al Qaeda ‘caliphate’ rife with battle-hardened extremists.

Dozens of troops from 1 Scots Guards and the Royal Marines are training three African nations in Senegal to tackle soaring numbers of diehard jihadists.

Countries such as Mali in the Sahel region are at the epicentre of the world’s fastest-growing Islamist insurgency. Thousands of extremists from IS, Al Qaeda and local groups are working together for the first time to wage mass terror. Foreign fighters have fled Syria to the lawless region, taking bomb-making skills with them. UK officials fear more could follow and plot overseas attacks. 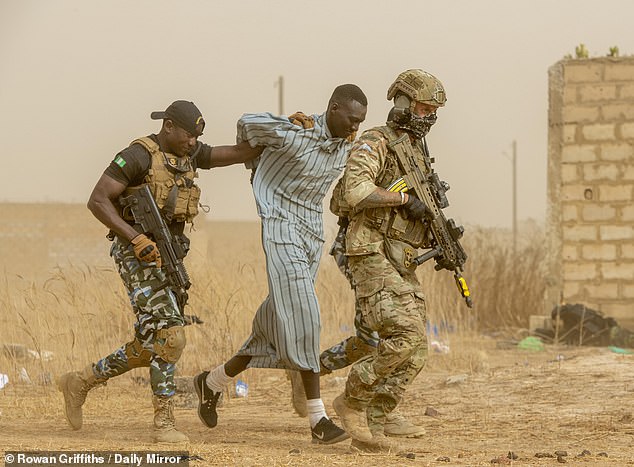 Operation Mansio: British troops (pictured) provide counter-terrorism training to Nigerian, Cameroonian and Moroccan forces in Senegal. Some 30 troops are stationed around these soldiers and in a huge exercise last week, UK forces guided the African soldiers as they attacked and detained members of a terrorist cell

The threat of a new Syria emerging in Africa’s ungoverned desert and scrubland has become a major security concern for the UK Government.

Colonel Matthew Botsford, who oversees the British military training team in Nigeria, said: ‘What none of us want to see is a caliphate anywhere near West Africa that imposes its own regime and Islamic law. That’s the worst case for us.’

He said ‘skills and experience are being transferred’ from Syria and Iraq to West Africa as IS is pushed out from the Middle East.

The colonel added: ‘Recent events in the UK over the last couple of years have proved that there is a link to Africa to the UK and back to Africa. Slavery, drugs, money, trafficking, you name it. The UK wants to play a part in ensuring that link is broken and it doesn’t manifest itself on the streets of

PREV Powerball winning numbers for $60 million jackpot are revealed
NEXT Now Congress faces a crisis over how to even VOTE as two House members test ...

Mel Gibson, 64, takes a self-isolation break as he stocks up on groceries with ...

CHRISTOPHER STEVENS reviews last night's TV: Who's afraid of the dark? A corpse ...