'I am what's left of Dick Van Dyke,' the actor said, introducing himself. 'I'm 15 years older than Bernie,' the 94-year-old Van Dyke then pointed out to the crowd, garnering laughs.

He proved his youth by doing a little jig onstage. He acted his age by losing his train of though mid-speech and being not fully attuned to the program. 'I'm supposed to introduce him, I don't even know if he's here yet,' Van Dyke said.

Van Dyke was not supposed to introduce Sanders, who was still in transit between San Jose and Los Angeles when the 'Mary Poppins' star took the stage.

Silverman opened for both Van Dyke and Sanders and explained to the crowd, 'Bernie is my kind of Jew.' 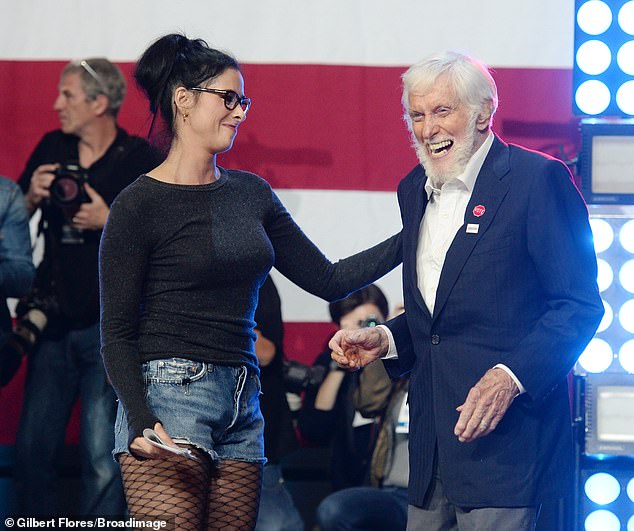 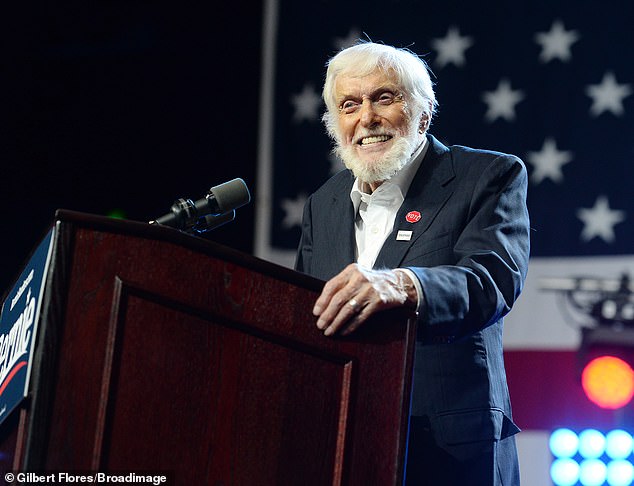 'I am what's left of Dick Van Dyke,' the 94-year-old 'Mary Poppins' star said. He showed off his youth by doing a jig on stage, but proved his age by losing his train of thought mid-speech and then not realizing he wasn't supposed to introduce Sanders

Sanders is 78 years and, if elected, would be the country's first Jewish president.

'A messy east coast Jew that fights for equality not just for his people, but for all people,' Silverman explained. 'The social justice warrior who lives his values, who cares about more about the welfare than his fellow Americans, than his standing, or the press of his suit or, let's face it, his hair.'

Silverman then shouted, 'Combs are for p***ies!'

But then she edited herself.

'I'm trying not to use that word that way, it's super negative,' she said.

'Combs are for McConnells!' she announced, getting a roar from the audience.

Music acts opened up and closed down the Sanders campaign event.

The rapper dropped a torrent of expletives trying to convince the crowd to get more politically active.

When Sanders arrived, he joked that he would only talk for 'three hours' before the headliner, Public Enemy Radio, would