Piers Morgan has today taken Health Secretary Matt Hancock to task over his response to the coronavirus crisis and demanded a clear answer on whether there will be a China-style lockdown in Britain.

The Good Morning Britain host said he is 'surprised' about the lack of 'dramatic action' by the Government to stop the virus' spread when a pandemic in the UK appears inevitable.

Mr Morgan said there was a danger Britain would fall behind in the fight as coronavirus cases and deaths far outnumber those during the 2003 SARS crisis.

He told Mr Hancock today: 'Surely it is now a time for the Government to accept this is when not if and start getting ahead of this by actually taking dramatic action'.

He added: 'What surprises me is that there is a lot of talk about what we might do - but what we're not doing is what the Chinese did is to go into effective lockdown - now why are we not doing that and what will it take to into similar territory?' 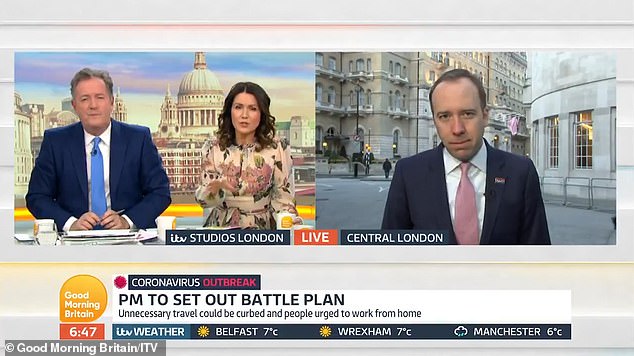 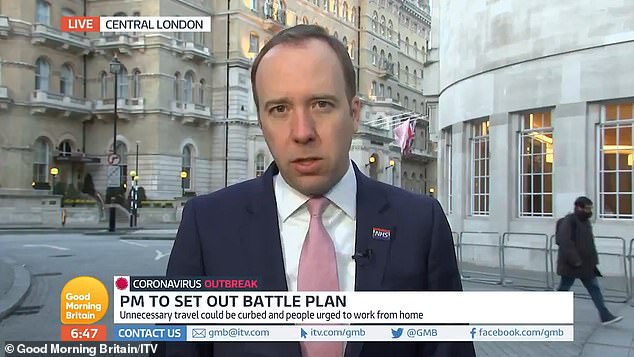 Mr Hancock said that while the crisis is 'very concerning' people should continue to live normal lives because the 'scientific advice' is that shutting down communities, schools and sporting events is not yet necessary.

He added: 'We have a clear plan that we are setting out today of how the country can get through this as well as possible. We are still in the phase very much where we are trying to contain this disease and working internationally and stop it becoming widespread throughout the whole county, as it has in other places. We are working very hard on that.

'We are also setting out today the measures we might make, if it becomes more widespread… lots of them are things I am reluctant to do. But we will do them if the scientists think they will keep people safe. The aim here is to minimise the disruption… subject to keeping people safe and following that scientific advice'.

Asked whether whether football matches could be stopped, he said they would keep the situation under review but that it was not appropriate to cancel games at this point.

But he later conceded in an interview with BBC Breakfast that the UK 'might have to' cancel the London Marathon next month to prevent coronavirus spreading like wildfire.

The 26.2mile race is the largest mass-participation sporting event in the world involving 45,000 runners from around the globe and up to 1million spectators lining the capital's streets.

But the April 26 event is in serious jeopardy because the chances of the coronavirus crisis developing into a global pandemic is now a 'serious possibility', Mr Hancock has said.

He spoke out as the Government is set to publish a 'battle plan' for coping with a potentially major outbreak of the virus in the UK.

The Health Secretary said that while the London Marathon may have to be postponed, Britain is not planning to shut all schools or cancel all large sports events - but will bring in emergency legislation to ensure they can take action if needed.

He said: 'Right now, we do not recommend the cancelling of mass events and schools as well should not be closing unless there is a positive case and the schools have the advice to close.

'There maybe things we have to do down the line that we don't want to, but we will need the powers to do that hence proposing emergency legislation'. 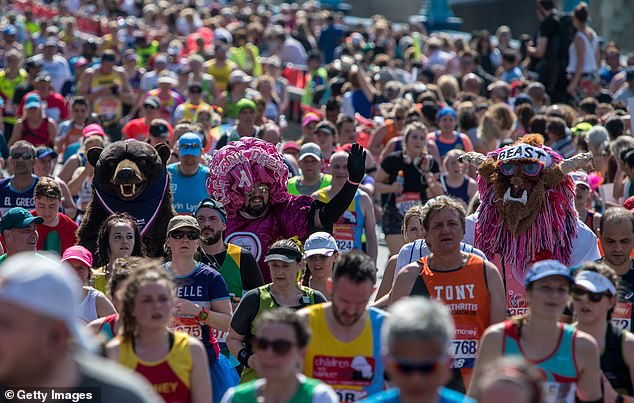 The huge number of spectators and runners at the London Marathon (pictured) could be a toxic mix if the number of coronavirus cases continue to increase, meaning it could be cancelled 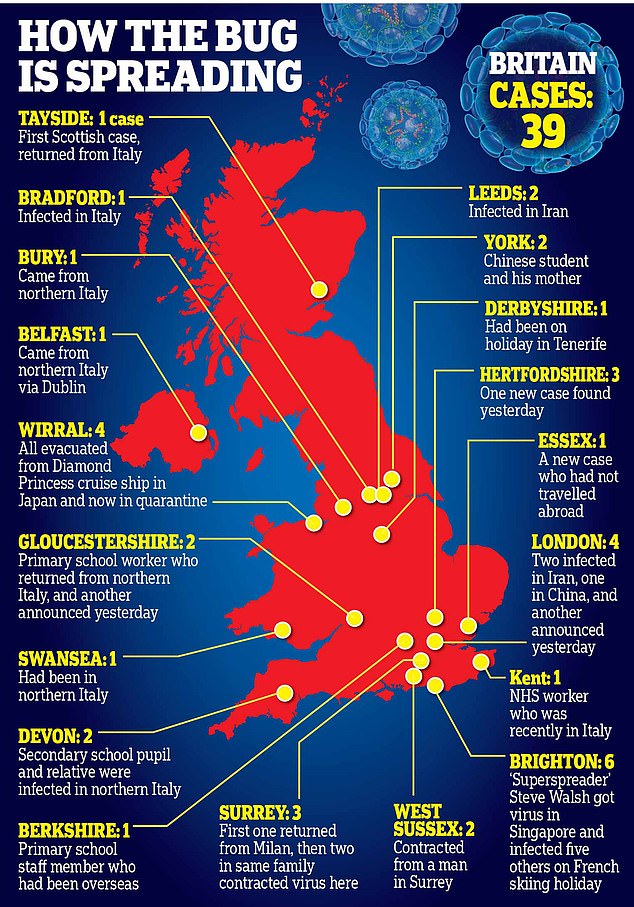 Mr Hancock also revealed that police will arrest people who are ill but refuse to self-isolate and the UK Border Force will be given greater powers to hold people at ports and airports if they are suspected of being ill.

He said: 'At the moment if somebody is suspected of having coronavirus we can ask them to self isolate and if they don't a police man can make that happen. We want to extend those powers to the border force as well'.

He said the number of home ventilation kits are being expanded and that 'the NHS, I am

PREV Gallery: The best photos from around the world mogaznewsen
NEXT How Japan stands to lose £11BILLION if the Olympics is cancelled

"Tell those affected" Martin Lewis shares furlough update as he highlights a ...

#OurGirl’s Michelle Keegan terrified as she was trapped during car explosion ...