CCTV footage captures the hilarious moment a mechanic gets smacked in the face by a trolley after kicking it in a fit of rage Gerrard gets hit after he kicks the back of the trolley causing it to swing round Footage was captured by CCTV at a garage in Clondalkin, county Dublin The rogue trolley had blown into the car park last Monday, damaging a vehicle

Hilarious footage shows the moment a mechanic accidentally hits himself on the head with the back of a trolley after kicking it in a fit of rage.

CCTV footage from Ninth Lock Autos garage in Clondalkin, county Dublin, shows the employee named Gerrard boot the back of the shopping trolley - which flips up and smacks him in the face.

The rogue trolley had blown into the car park last Monday, damaging one of the vehicles and prompting Gerrard to lash out in anger.

As the clip begins, the trolley is seen being buffeted by the wind into the side of a parked car.

Gerrard then approaches the vehicle, attempting to move the trolley out of the way before spotting the damage it has caused.

He angrily rubs at the side of the car in an attempt to remove the scratches before losing it and kicking the trolley. 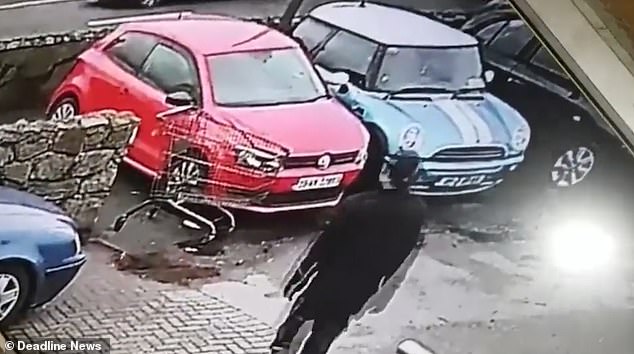 Spotting a hazard: Gerrard approaches the wind blown trolley to try and stop it from