Oscar-winning director and New York Knicks season ticket holder Spike Lee is refusing to attend the team's games for the rest of the season and has accused the club of lying about his confrontation with Madison Square Garden security on Monday night, adding his belief that franchise owner James Dolan is inexplicably targeting him.

'I'm being harassed by James Dolan and I don't know why,' Lee, 62, told ESPN's First Take on Tuesday.

Lee's tirade came after a disagreement with Madison Square Garden (MSG) security on Monday prior to the Knicks game against the Houston Rockets. The heated argument was recorded and subsequently went viral on social media, showing an irate Lee yelling security guards and referencing Charles Oakley, a former Knicks player who was ejected by the team in 2017 for allegedly inappropriate behavior at a game. 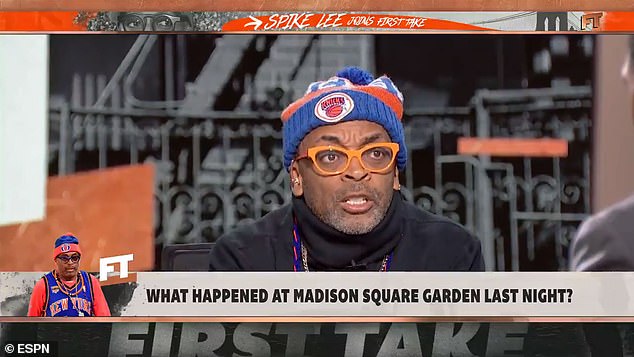 Oscar-winning director and New York Knicks season ticket holder Spike Lee is refusing to attend the team's games for the rest of the season, he told ESPN's First Take on Tuesday 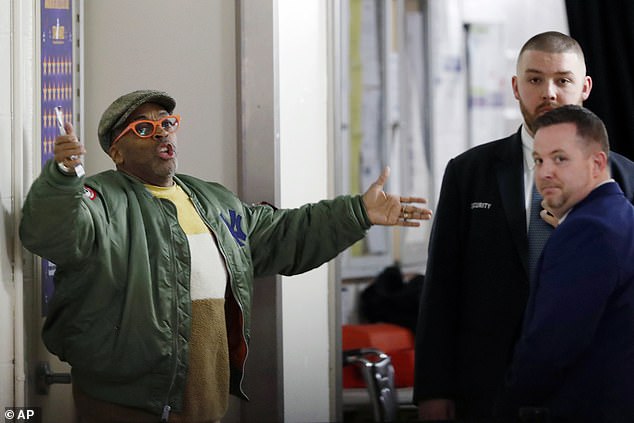 Director Spike Lee, left, gestures in a hallway on the event level at Madison Square Garden while arguing with security officers who didn't want to permit him to access his court side seat

Oakley subsequently sued the Knicks and Dolan, who had accused him of being drunk, but the defamation lawsuit was recently dismissed.

On Monday, a Knicks spokesman told reporters that Lee was not ejected, and it was simply a case of Lee using the wrong entrance, adding that he and Dolan spoke and the issue was resolved.

Lee was seen at MSG at the end of the game – rare win for the struggling Knicks over the playoff-bound Rockets – so he the statement accurately reflected the fact that he was not ejected.

However, Lee took issue with the team's claim that he was using the wrong entrance – the employee entrance that he has used for the last 28 years.

'When I read that lie, that spin, I called you,' Lee told the First Take hosts.

The Knicks responded with their own statement on Tuesday afternoon.

'The idea that Spike Lee is a victim because we have repeatedly asked him to not use our employee entrance and instead use a dedicated VIP entrance – which is used by every other celebrity who enters The Garden – is laughable,' read the Knicks' statement.

'It's disappointing that Spike would create this false controversy to perpetuate drama. He is welcome to come to The Garden anytime via the VIP or general entrance; just not through our employee entrance, which is what he and Jim agreed to last night when they shook hands.'

A fixture at Knicks games for the last 28 years, Lee disputed the team's characterization of Monday's events - specifically the 'Garden spin' about him and Dolan making peace.

'Mr. Dolan, I don't want to talk about nothing,' Lee said of his interaction with Dolan on Monday. 'I've been coming through this entrance for 20 years.'

Although he is a paying fan, Lee is known to use the employee entrance, which doubles as the media entrance.

To be clear, Lee was not upset about being asked to use a different entrance, but was furious he wasn't told to do so before his confrontation with security.

'Text, email, let me know,' Lee said. 'When did this policy change?

'They never said when the thing changed, so why not call me?' Lee said. 'When my deposit's due, this astronomical price for Knicks tickets and I'm one day late, my phone is ringing off the

Laura Dern drops her son off at a friend's house... after taking strict social ...