The shelves of British supermarkets are emptying at pace and staples are being rationed as coronavirus stockpiling spiralled out of control today amid warnings of 'food riots' if the crisis worsens.

Pharmacy shelves are also emptying of paracetamol, ibuprofen and immune-system boosting tablets such as Berocca as people prepare to fight off the flu-like illness that has claimed hundreds of lives worldwide.

Facebook and Twitter is packed with photographs of empty shelves from major supermarkets across the UK where shoppers appear to have thrown empty boxes into the aisles in the mad scramble for items.

MailOnline readers have also shared pictures of their well-stocked larders as people prepare for weeks in isolation.

One reader said: 'I have been trying for THREE days to buy pasta but I cannot see any as most shops have run out of pasta and pasta sauce'.

The scramble for food has also revealed what Britons do not consider essentials despite a China-style shutdown of communities predicted - including some flavours of crisps and confectionary including Terry's Chocolate Orange.

As stockpiling is on the increase, MailOnline can reveal: 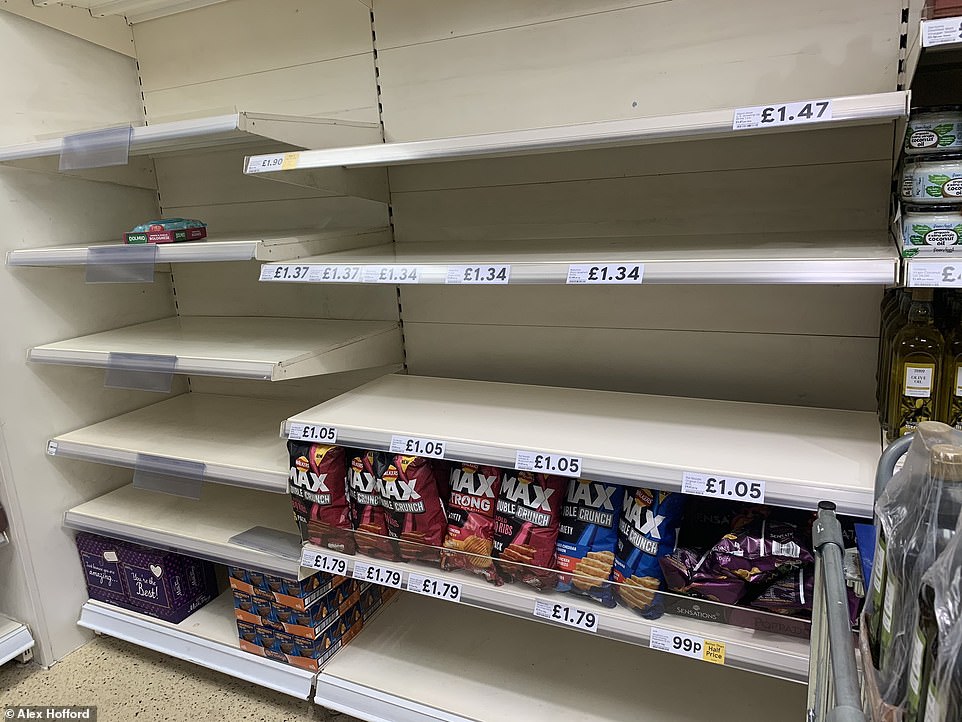 Shelves in this London Tesco is empty of pasta, pasta sauces, rice and other staples but crisps and chocolate oranges appear to have been left 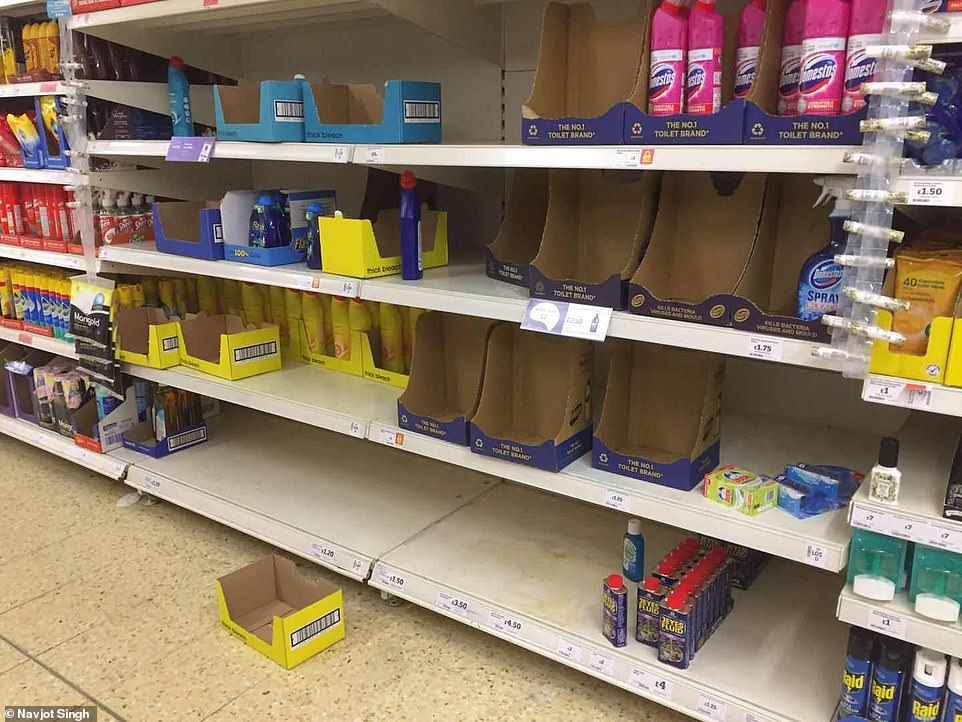 This London Sainsbury's is running out of germ-busting disinfectant, bleach and anti-bacterial wipes 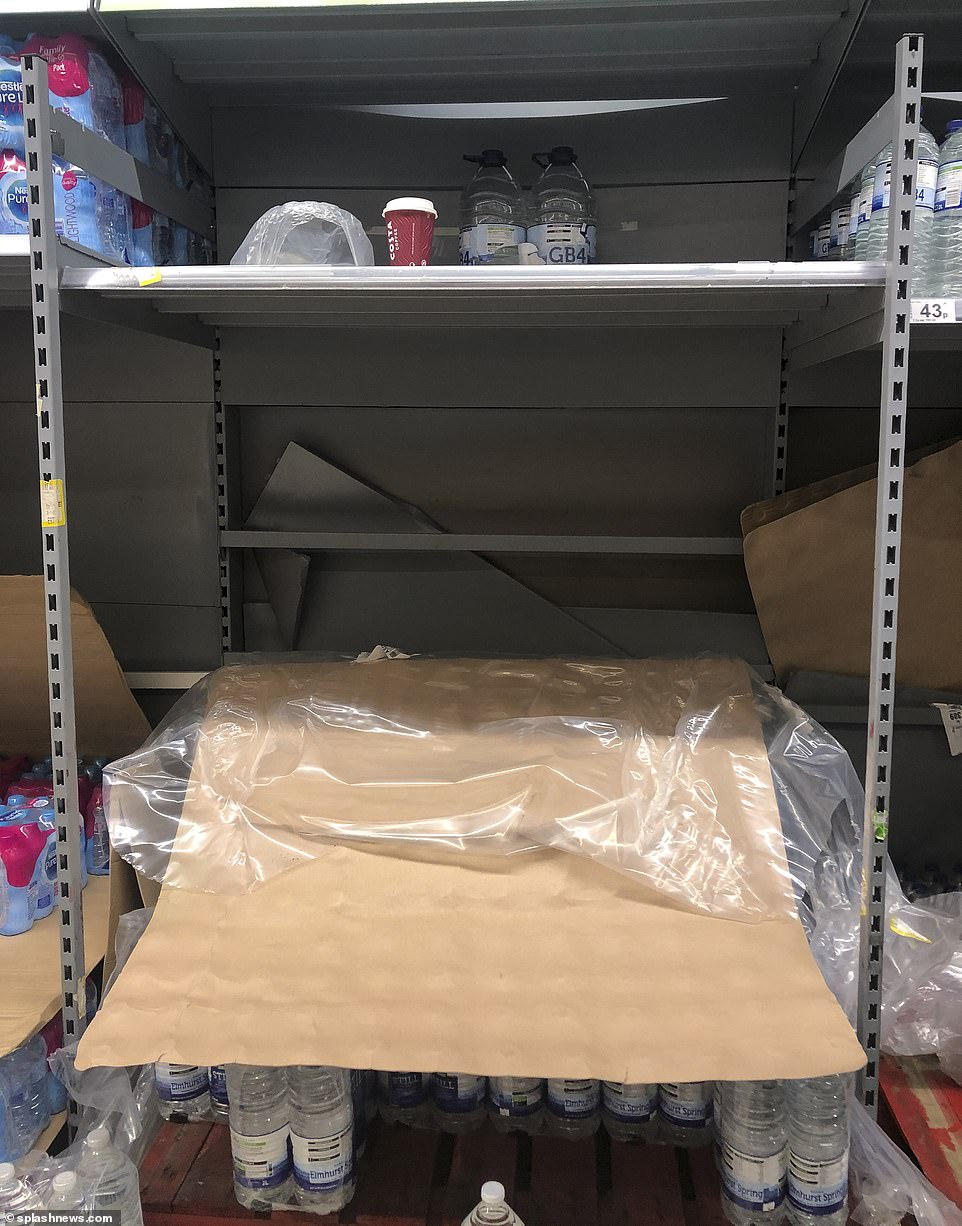 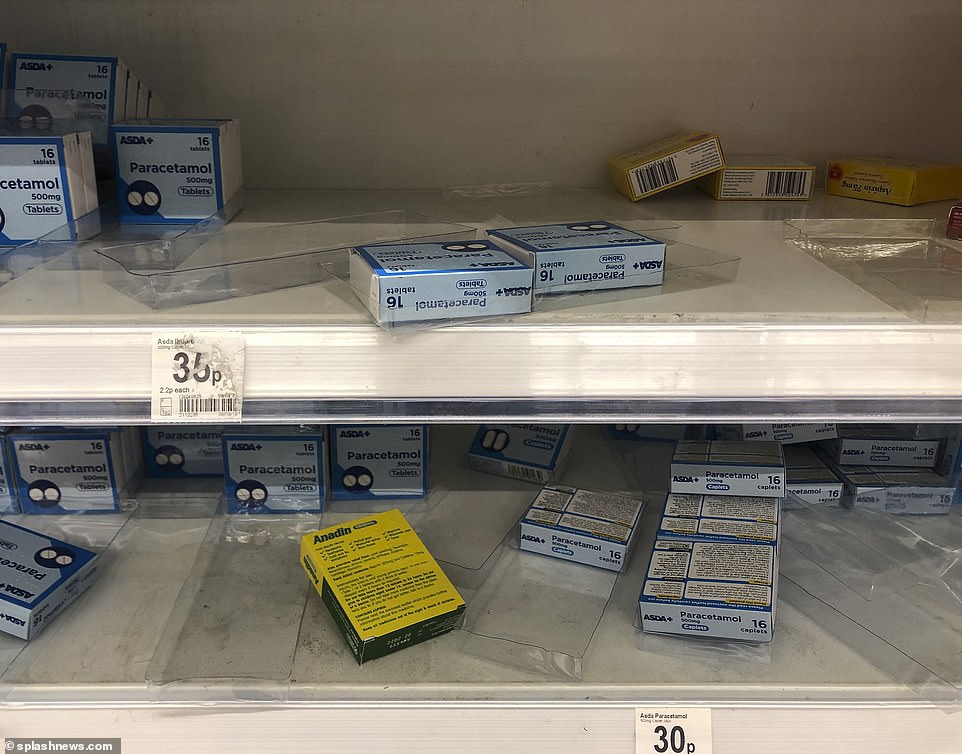 Sales of oral painkillers such as paracetamol, aspirin and ibuprofen are up ten per cent in the past year 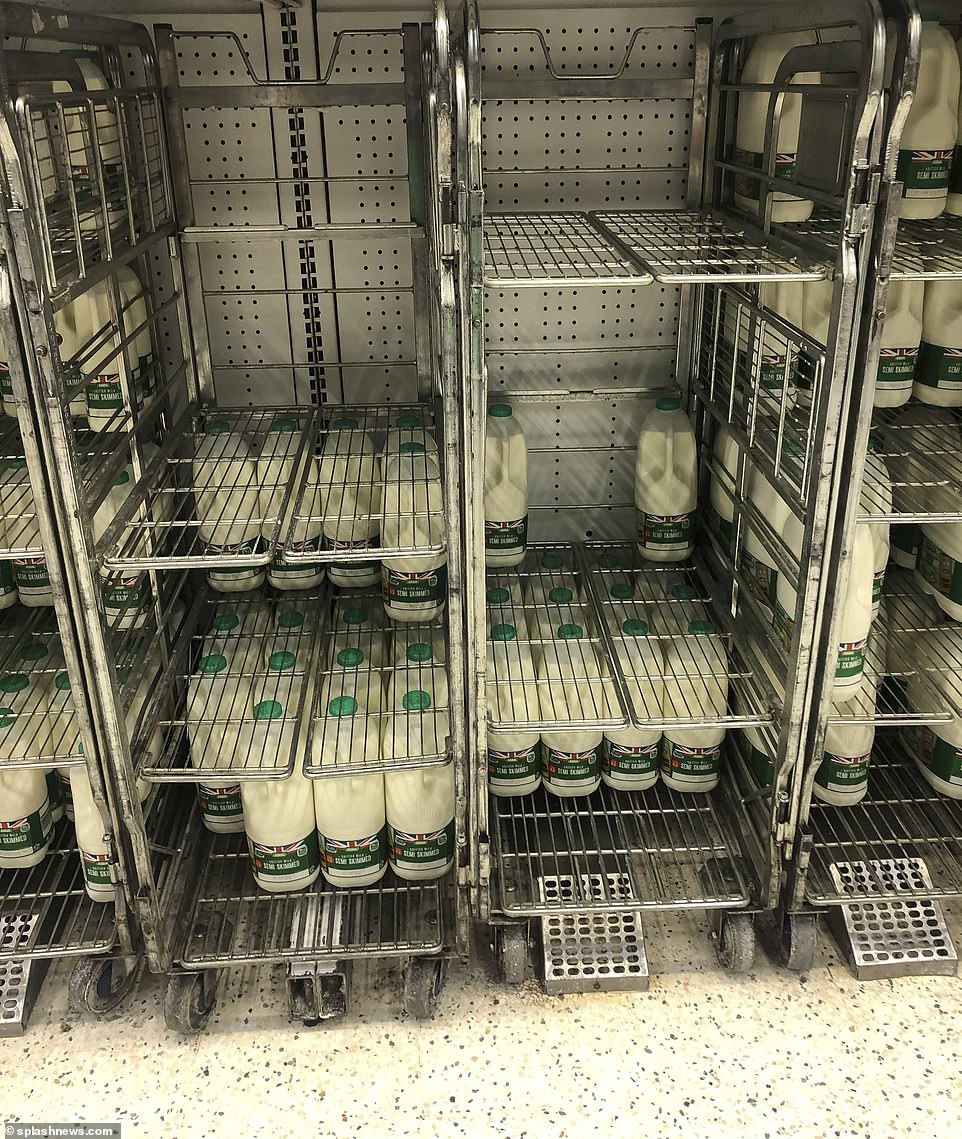 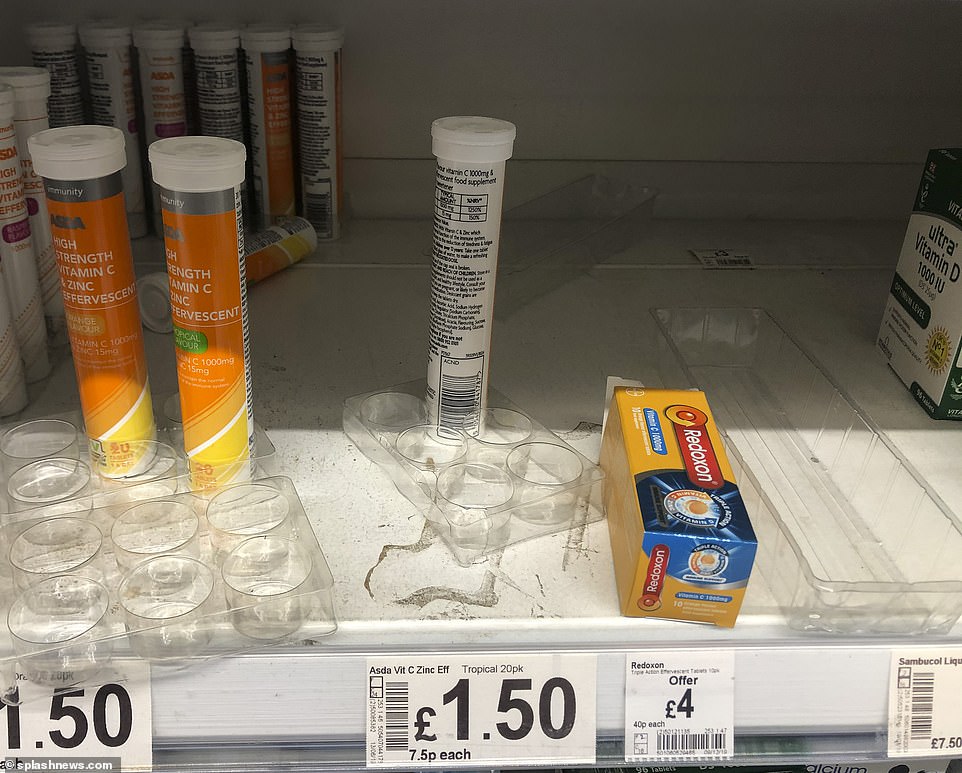 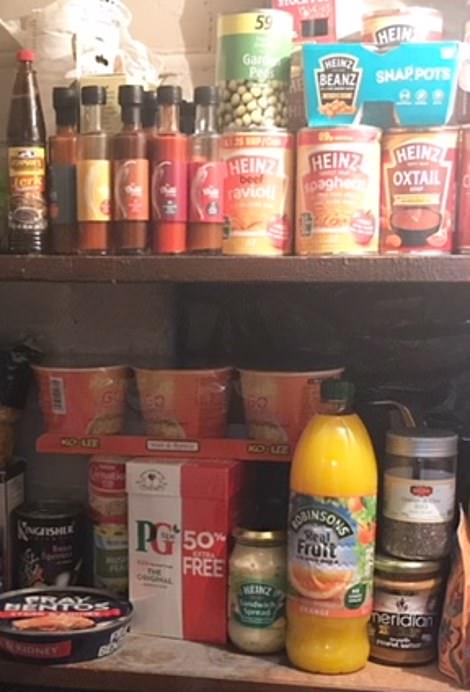 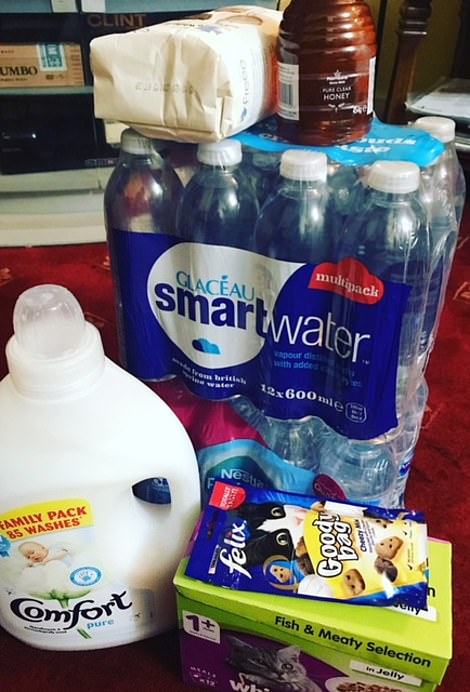 This MailOnline reader has shared pictures of her stockpiled goods that include pies, squash, beans, sauces, detergent, bottled water and pet food 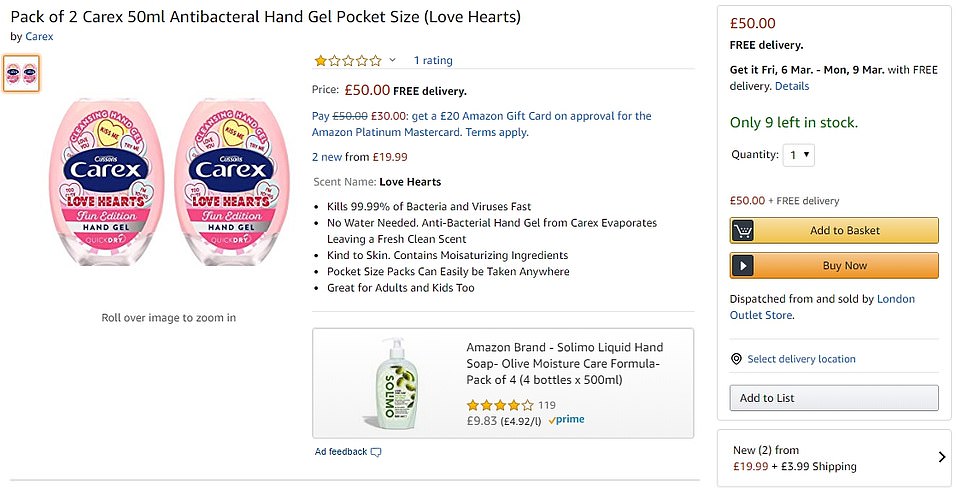 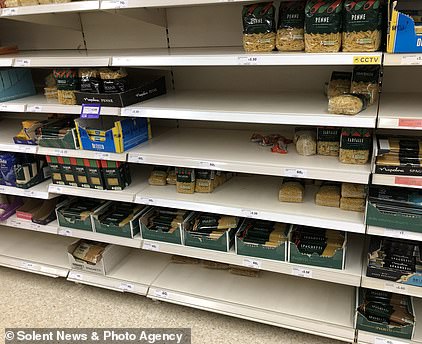 Shoppers and supermarket staff have told how the Haslemere Coronavirus outbreak has caused panic buying.

Stocks of toilet roll, pasta and baked beans were completely sold out at the Sainsbury’s store in nearby Liphook, with new deliveries failing to make-up the short-fall.

One shopper, who declined to be identified, told MailOnline: ‘There was panic buying here on Saturday.

‘The shelves were empty of rice, pasta, beans of all kinds, lentils and loo roll.

‘People were clearly worried about what had happened in Haslemere and wanted to make sure they would be ok if they had to stay in-doors.’

The 55-year-old mother-of-two, from Liphook, added she had been buying extra provisions today.

She said: ‘Today I saw the shelves were almost empty of loo roll so I have stocked up. I’ve also got some extra tins of soup in and some Lucozade in case we have to self-isolate.

‘Haslemere is only down the road and everyone around here knows people there.’

A Sainsbury’s worker described the weekend as ‘heaving’.

He said: ‘Saturday and Sunday were unbelievably busy – much busier than a normal weekend. We sold out of lots of essentials, like beans, toilet roll and pasta. It looked like people were trying to stock up just in case.’

Shops have seen a surge in panic buying fuelled by the coronavirus crisis - and supermarkets have now drawn up contingency plans to 'feed the nation' in the event of a sudden escalation, it has emerged.

Ocado has emailed customers to warn it is running out of home delivery slots due to 'exceptionally high demand' and 'particularly large orders'.

Waitrose reported 'seeing more demand for... cleaning products and hand sanitisers', and Tesco's website has sold out of hand gel.

Lidl said it is 'experiencing a significant increase in demand for durable products and disinfectants'.

It has now limited sales