New York City Mayor Bill de Blasio announced Thursday his goal of reopening the city's schools by April 20, despite the dramatically escalating coronavirus outbreak which saw 100 deaths in the state in one day.

De Blasio predicted that the city is to see the worst of the pandemic in April and May but still hopes to see students return to class before the crisis eases up.

On Thursday afternoon, the mayor visited Brooklyn Navy Yard where 120,000 face masks are expected to be made by local business in the coming days to ease the growing strain on the healthcare system severely lacking in supplies.

He teased an announcement that desperately needed ventilators will be soon be produced locally.

Nearly 22,000 people have been infected with the coronavirus in NYC and the death toll stood at 281 by Thursday afternoon. 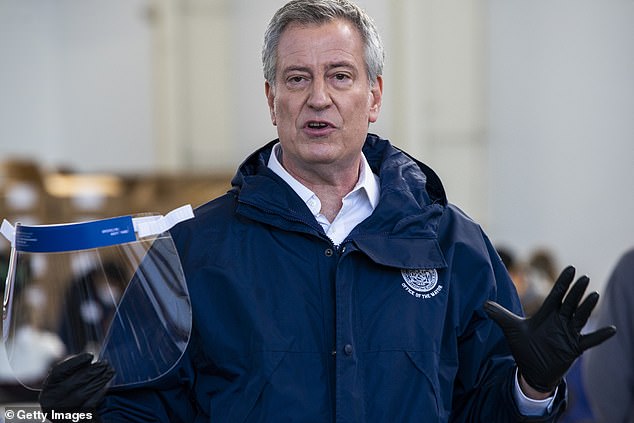 New York Mayor Bill de Blasio holds a face shield as he speaks to the media during a visit to the Brooklyn Navy Yard Thursday where he announced 125,000 masks would be made by Tuesday 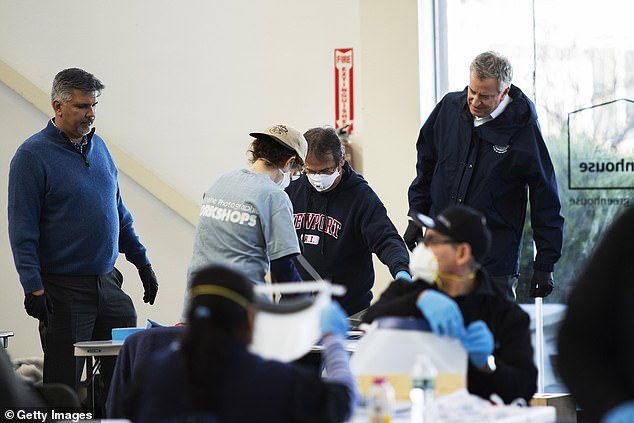 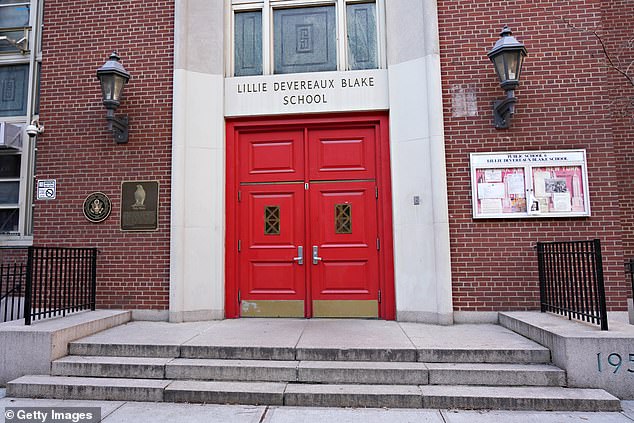 A view of temporarily closed Lillie Devereaux Blake School as the coronavirus continues to spread across the United State. De Blasio hopes to open schools again by April 20

De Blasio revealed his aim to reopen schools during a daily briefing Thursday in which he answered questions on the city's ability to provide meals to children through the end of the school year despite closures.

The school year was scheduled to end on June 26.

The mayor said that meals would be available even if students even if the schools don't reopen.

'We hope to get schools back up on April 20, but that's going to be a big challenge,' de Blasio said.

As of Thursday morning, there are 21,873 cases of coronavirus confirmed in the five boroughs, according the the Health Department.

Of those, 11,967 people, or 55 percent, are younger than 50 years old but the majority of those who have died have been older.

Nobody under 17 has died of COVID-19 in New York City and 96 percent of deaths have had an underlying illness. 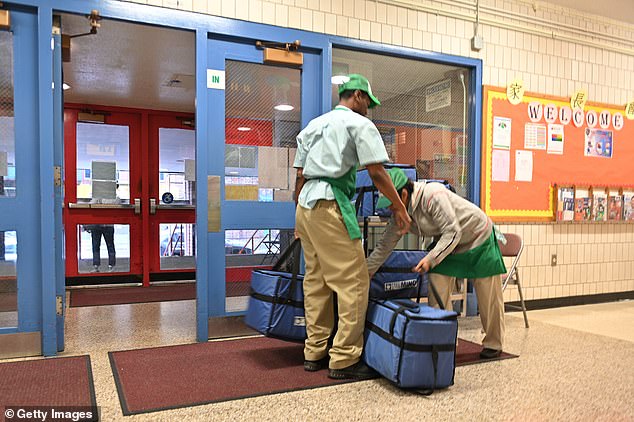 Members of SchoolFood prepare a cart for school breakfasts and lunches to go for parents to pick up for students at Yung Wing School in Manhattan. Meals will continue until June 26 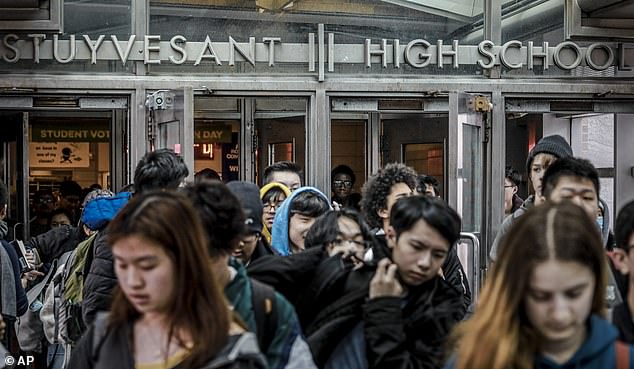 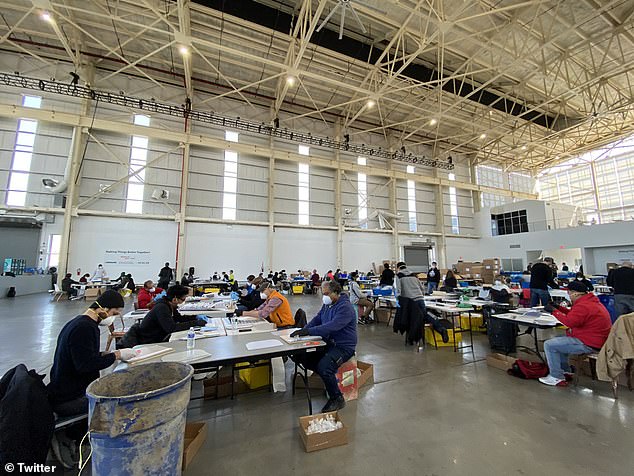 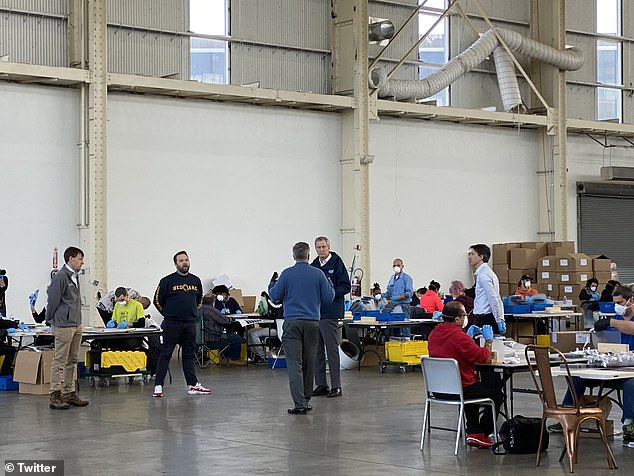 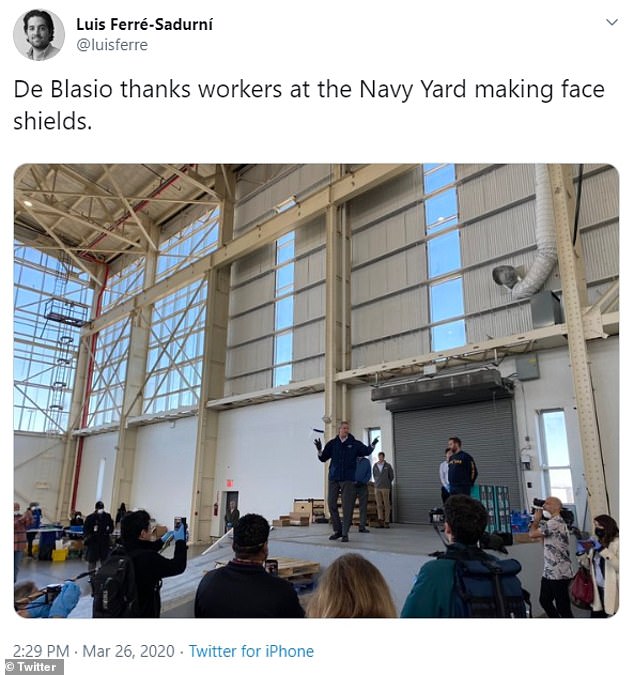 On Thursday afternoon, de Blasio visited Brooklyn Navy Yard to thank workers from three separate companies who have joined forces to deliver between 15,000 and 18,000 new face masks a day for health care workers.

Businesses have pivoted from making whiskey and retail displays to hand sanitizer and face shields.

Duggal, New Lab, and Bednark Studio, which was originally forced to lay off staff last week, have called their workers in to begin on the task.

The companies first created a prototype for the mask on Saturday and quickly began production on Wednesday as the Mayor announced that the city has called on local businesses to do what they can to help produce more supplies for hospitals.

All wearing masks and separated on different tables, the workers from Duggal Visual Solutions and Bednark showcased their products to the mayor, who announced that 125,000 masks are expected to be produced in this center alone in the coming days and shipped to local hospitals by next Tuesday.

'Every one of you are heroes right now because you are providing us with supplies that are going to save lives and protect out health care workers,' he told workers.

'And you make me very proud of New York City and of Brooklyn, seeing that this has been created in a matter of days to protect people and it is an example of how we are going to fight back.' 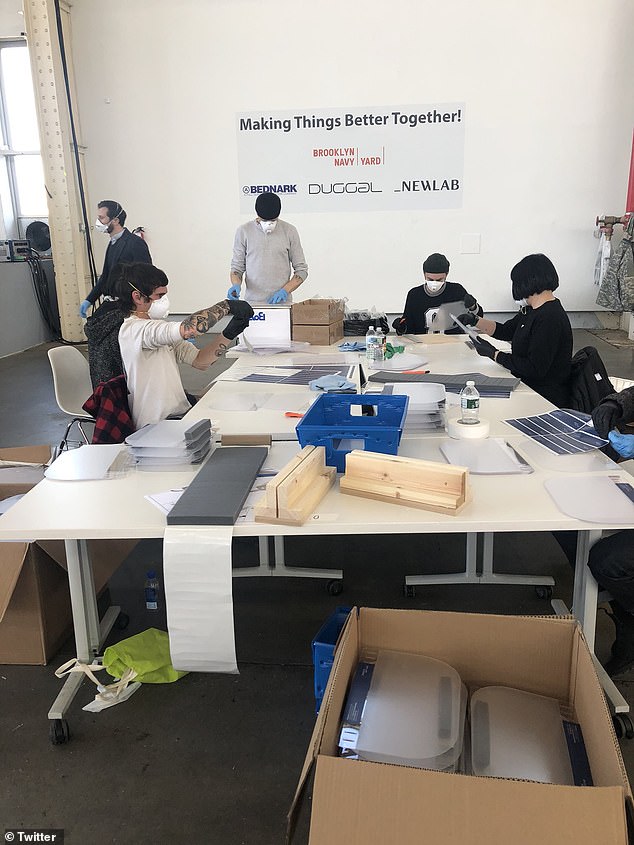 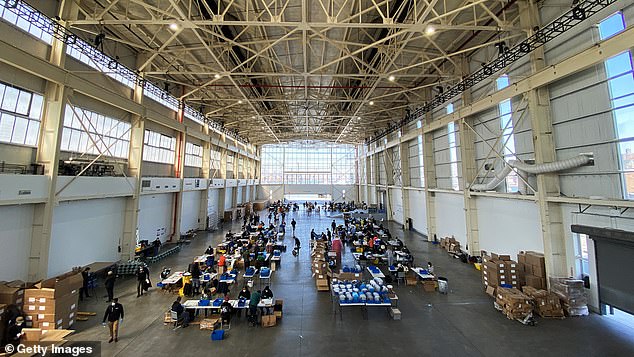 While at the Navy Yard the Mayor also teased an announcement of locally produced ventilators that could come in a second briefing later Thursday, according to New York Daily News reporter

Anthony Kiedis gets some fresh air with son Everly while walking his dogs in ...