Dow jumps 1,300 points in its biggest three-day surge since 1931 after $2 trillion coronavirus rescue bill is passed and unemployment figures rise to 3.3m Wall Street rallied for a third straight day on Thursday  The Dow closed 1,300 points higher on Thursday, while the S&P 500 gained 154 points and the Nasdaq rose 413 points It was the Dow's biggest three-day surge since 1931   The gains came soon after Labor Department released its employment figures showing jobless claims had increased by 3 million last week  Coronavirus symptoms: what are they and should you see a doctor?

The Dow surged more than 1,300 points on Thursday in its biggest three-day surge since 1931.

Wall Street rallied for a third straight day on Thursday as record weekly jobless claims came in below investors' worst fears and investors focused on an unprecedented $2 trillion stimulus.

The gains came the same day the Labor Department released its employment figures showing jobless claims had increased by 3 million last week as strict measures to contain the coronavirus pandemic ground the country to a sudden halt. 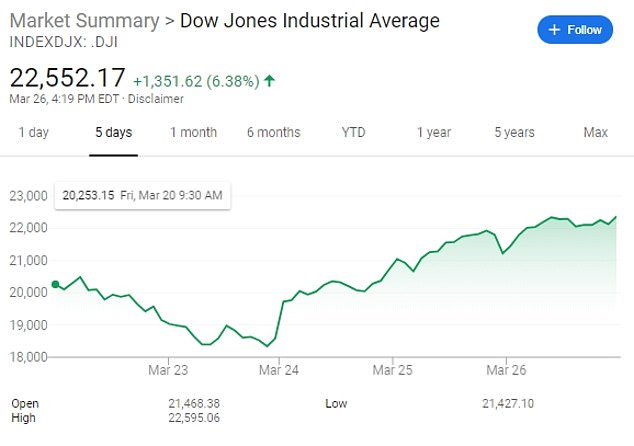 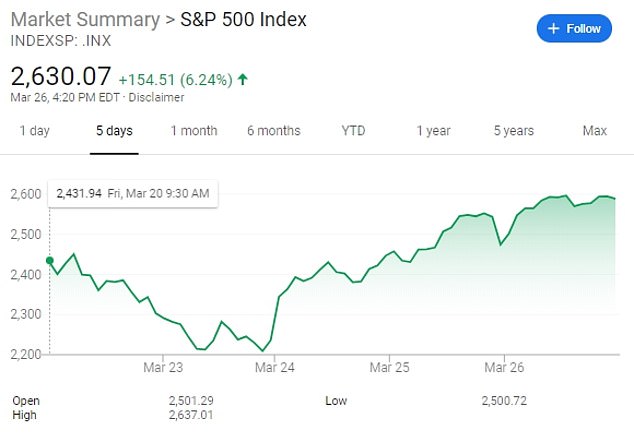 Investors were relieved that a massive surge in unemployment applications, despite busting records at 3.3 million, fell short of the worst forecasts.

The outbreak has happened so suddenly that the jobless report is one of the first points of data showing how much economic pain it´s creating.

The Dow was down nearly 500 points just before the jobless claims number was released Thursday morning but rebounded at opening.

The stock market notched its first back-to-back gains on Tuesday and Wednesday on optimism surrounding actions by the Federal Reserve to support credit markets and the approval in the Senate of a $2.2 trillion