The Queen delivered a historic rallying cry to the British public tonight, urging them to come together in the fight against the coronavirus outbreak in a poignant television address.

Speaking from Windsor Castle, where the 93-year-old monarch is isolating with Prince Philip, she told millions of Brits watching from home: 'If we remain united and resolute, then we will overcome it.'

Her Majesty's extraordinary intervention is only the fifth time she has addressed the nation during her 67-year reign and comes as the UK death toll from the pandemic neared 5,000, with 621 new deaths today.

She invoked the spirit of the Second World War, repeating Dame Vera Lynn's famous words as she promised the nation: 'We will meet again'.

The monarch shared special praise for the NHS, thanking medical workers for their work and sacrifice in the battle against the virus.

She said: 'I want to thank everyone on the NHS front line, as well as care workers and those carrying out essential roles, who selflessly continue their day-to-day duties outside the home in support of us all.

'I am sure the nation will join me in assuring you that what you do is appreciated and every hour of your hard work brings us closer to a return to more normal times.' 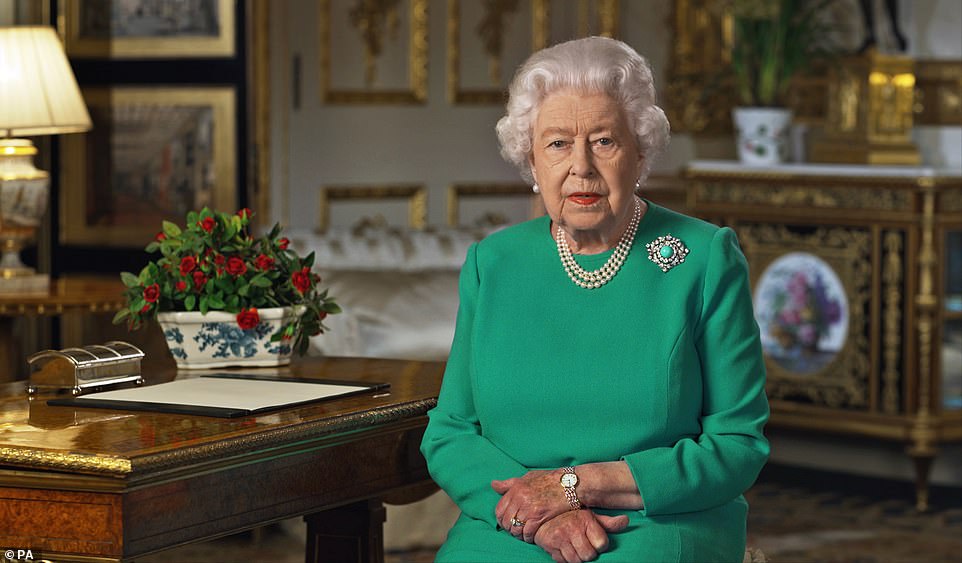 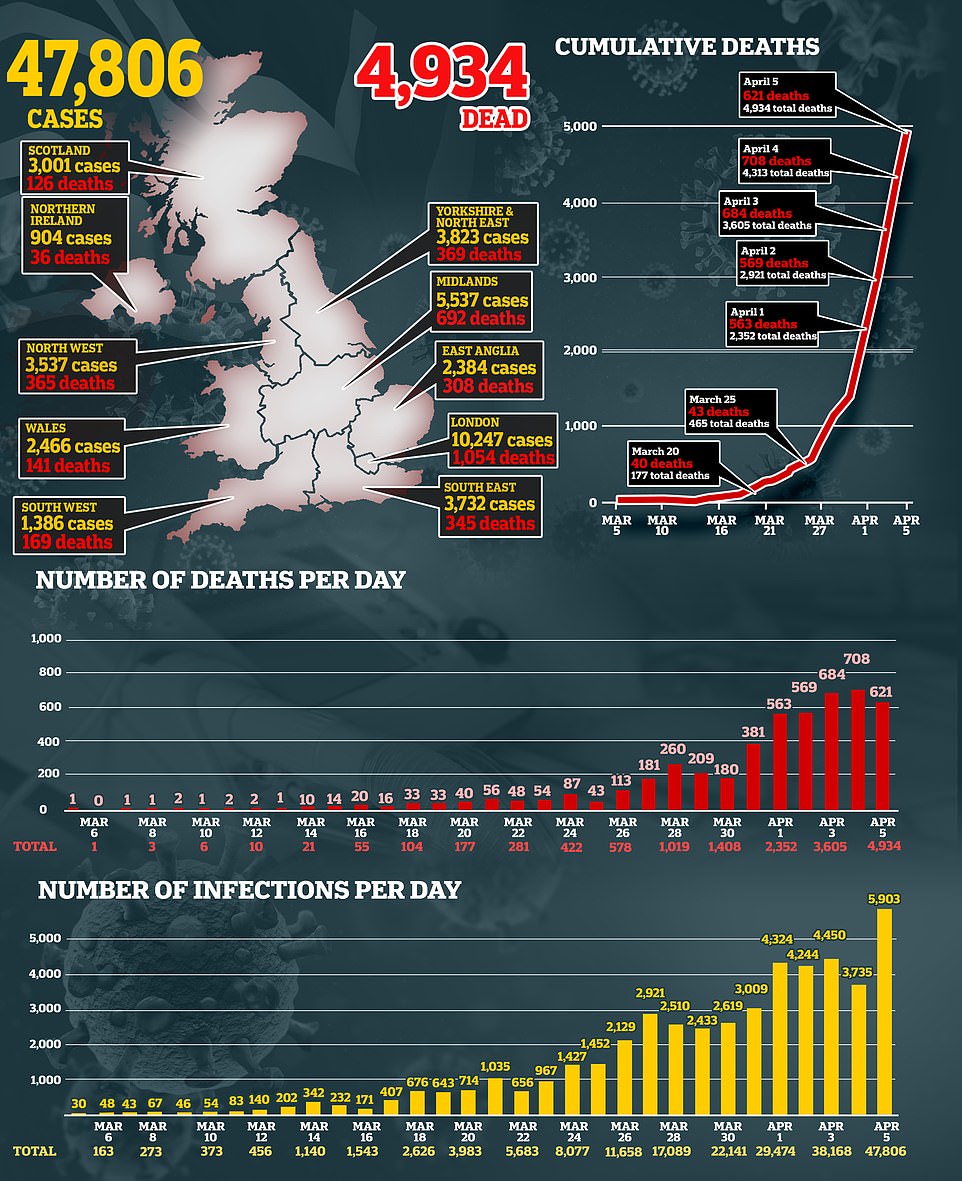 Britain's coronavirus death toll has now hit 4,934 - including 29 patients today who did not have any underlying health conditions.

The people who died today were between 33 years and 103 years old, with 29 of them, aged between 35 and 95 years old, having no known underlying health conditions.

The level of infections has risen sharply by almost 60 per cent, from 5,903 to 47,806, dashing hopes the rate of people getting the disease was starting to level out.

In an extraordinary and unprecedented operation, a sole cameraman was permitted to enter the White Drawing Room wearing latex gloves and a surgical mask, standing more than the regulatory two metres away from the elderly monarch.

Aides stressed that the address was ‘deeply personal’ and it was clear that she had been inspired by the speech her late father, George VI, made at the start of the Second World War when he warned of dark times ahead but said he hoped that the British spirit would prevail.

She said: ‘I am speaking to you at what I know is an increasingly challenging time. A time of disruption in the life of our country: a disruption that has brought grief to some, financial difficulties to many, and enormous changes to the daily lives of us all.

‘I hope in the years to come everyone will be able to take pride in how they responded to this challenge. And those who come after us will say the Britons of this generation were as strong as any. That the attributes of self-discipline, of quiet good-humoured resolve and of fellow-feeling still characterise this country. The pride in who we are is not a part of our past, it defines our present and our future. ’

The Queen also highlighted government efforts to get people to stay at home in order to minimise the spread of COVID-19, stressing that it is only by pulling together and encouraging everyone to play their part that the country will win this new, insidious war.

‘I also want to thank those of you who are staying at home, thereby helping to protect the vulnerable and sparing many families the pain already felt by those who have lost loved ones,’ she said.

‘Together we are tackling this disease, and I want to reassure you that if we remain united and resolute, then we will overcome it.’

Like the grandmother and great-grandmother she is, the Queen also noted the nationwide initiative of children drawing rainbow pictures to put up in their windows as a sign of solidarity with the NHS and to inspire positivity, as well as what is fast becoming the Thursday night convention of clapping for the NHS.

She said: ‘The moments when the United Kingdom has come together to applaud its care and essential workers will be remembered as an expression of our national spirit; and its symbol will be the rainbows drawn by children. ‘

It is this spirit of community initiative, the Queen stressed, that will help see the nation through some of its darkest days since the Second World War - whether it be leaving home cooked meals outside the doors of self-isolating neighbours or the hundred of thousands of ordinary people who have signed up to become NHS volunteers in a bid to ease the pressure on our national healthcare system.

’Across the Commonwealth and around the world, we have seen heart-warming stories of people coming together to help others, be it through delivering food parcels and medicines, checking on neighbours, or converting businesses to help the relief effort,’ she says.

Referencing her first ever public broadcast with her sister, Princess Margaret, in 1940, she conjured up the image of young children being sent away as evacuees by their distraught parents in order to protect them from the

The adorable tradition Kate Middleton maintains when travelling with her ...

Kardashian family hit back at Blac Chyna's claims of racism over Rob & Chyna ...