On Monday, Gary Underwood got out of bed at 3am to bring in his 100-strong herd of Friesian cows from the fields.

By the time the rest of us had finished breakfast, his 'girls', as he likes to call them, had long since been milked and led back out to pasture on the 120-acre patch of countryside near the village of Oulton, in Staffordshire, that has been home to his family for generations.

Two thousand litres of creamy full-fat milk, chilled to a temperature of four degrees, were sitting in a tank in his barn, ready to be collected by the lorry sent daily by Freshways, one of Britain's largest dairy companies.

But the lorry never came. 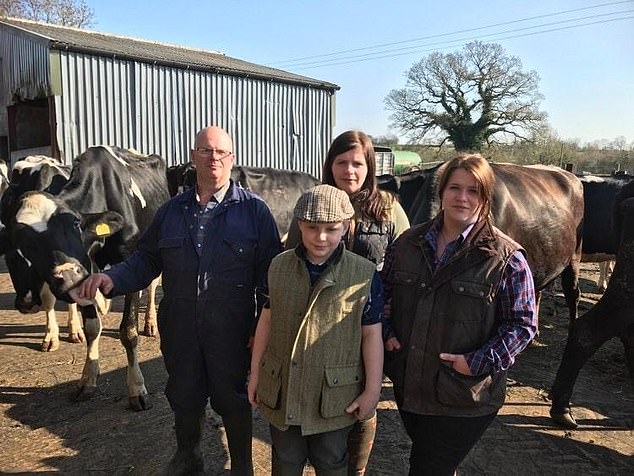 Gary Underwood (far left) with his family (left to right) Felix, Melissa and Alicia own an 120-acre patch of countryside near the village of Oulton in Staffordshire

Instead, just after noon, Underwood received a curt text message telling him the day's visit was cancelled.

With no extra space to store his product, and the cows in need of milking that evening, Gary and his grown-up daughters Alicia and Melissa had to throw it all away.

A video made by Melissa shows it gushing noisily into a slurry pit.

'It makes you sick to the stomach,' she tells me.

'Never in four generations have we been forced to throw out milk. We won't be paid. It's just gone. Money literally down the drain.

'Dad's 58, he has been committed to this farm his whole life. And, through no fault of his own, he is throw into a situation that could break him.' 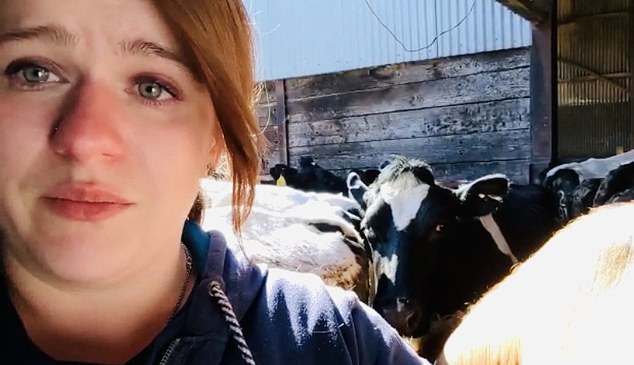 Britain's 10,000-odd dairy farmers are being forced to pour away millions of pints of fresh milk. Pictured: Dairy farmer Alicia Underwood and the Friesians whose milk is wasted

The 'situation' is one being experienced across the countryside, where every day hundreds of Britain's 10,000-odd dairy farmers are being forced to pour away millions of pints of fresh milk.

To blame are ructions in the food supply chain caused by the coronavirus emergency, which in a few short weeks has shuttered the pubs, restaurants and coffee shops that normally buy about half of the 40million litres of milk we consume each day.

Suddenly, big companies such as Freshways, which only supplies the food service industry — its clients include Costa Coffee, Starbucks, British Airways, P&O and McDonald's — can't sell their highly perishable product, so their tankers are cancelling visits to the farm gate.

Yet the nation's 1.8 million cows keep on producing milk, morning and night. Some estimates suggest that about 1.5million litres were thrown away on Sunday, when there was also a shortage of lorry drivers due to illness.

'What a waste of all the effort that goes into producing quality food,' was how Wiltshire dairy farmer Robert Mallet described the heartbreaking loss of 17,000 litres of fresh milk.

'My grandmother says this is worse than wartime,' Llyr Griffiths told reporters from his farm in Ceredigion, as he tipped away 11,500 litres.

'At least the countryside could carry on producing food for the war effort and local people back then. But with this, we have no control over anything.' 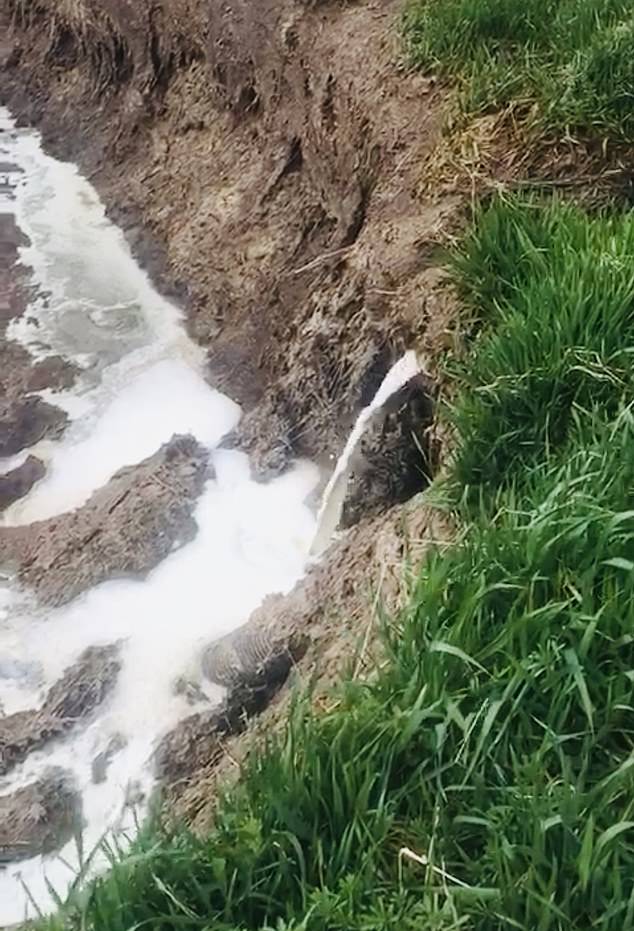 With no extra space for storage, and the cows in need of milking that evening, the Underwoods were forced to throw the milk away into a slurry pit (pictured)

Meanwhile, in a cruel twist, demand in the retail sector has risen dramatically, so the companies that supply shops which sell milk to us all are struggling to get their hands on enough of it.

This has produced an absurd situation where there are shortages of milk, butter, cream and cheese on some supermarket shelves, just as producers such as Mallet, Griffiths and Underwood — who, like almost all dairy farmers, are under contract to sell only to one company — are pouring thousands of gallons away.

'Our local Aldi is only letting us buy one container of milk per customer, and they are limiting purchases of UHT to four bottles,' says Melissa Underwood, 34.

'I have five children, aged from nine months to 18, so in our house one bottle doesn't go far. It's maddening.' 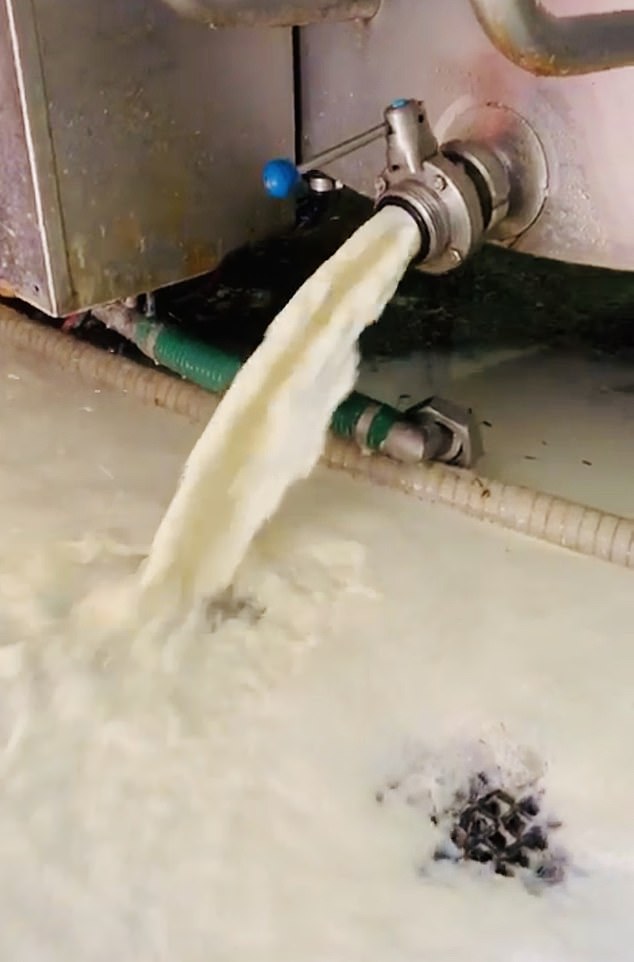 Robin Betts, who farms a herd of 100 cows on the North Downs in Kent and is contracted to contracted to produce milk for Freshways, lost 3,500 litres in one day

For many dairy farmers, whose industry has for years run on waferthin profit margins, the financial implications are frightening.

'The milk price has been at a historic low, so we are on the edge anyway. And now we can't offload it,' says Robin Betts, who farms a herd of 100 cows on the North Downs in Kent.

'I chucked away 3,500 litres on Sunday. When you have worked so hard, when you are raising these cows and feeding them and getting up before dawn to milk them, it just doesn't sit well to chuck it into a lagoon — not when you then see shortages.

'But it's happening across the country. We have no route to market.'

Betts is also contracted to produce milk for Freshways, which usually pays him between £15,000 and £20,000 a month.

He says it has yet to pay for February's supply, and has changed the payment terms so the cheque for March won't now arrive until mid-May.

Even when its lorry does show up, the company has recently cut the price it pays farmers for milk from 24.5p to about 22p per litre (Freshways did

PREV Police 'fighting a losing battle' as Britain's parks are packed with ...
NEXT All the things Boris Johnson DIDN'T explain in coronavirus speech