The coronavirus lockdowns have hit Melbourne harder than any other property market, new data showed.

Victoria has been tougher than the other states in enforcing stage three restrictions, with police there even fining a learner driver for being in a car with her mother.

Median house prices in Melbourne fell by 0.4 per cent in April, making it the only Australian mainland state capital to suffer a decline after open-home inspections and public auctions were banned, CoreLogic data showed.

By comparison, equivalent prices for a detached home rose by 0.3 per cent in Sydney, Brisbane and Perth as values also increased in Adelaide (0.4 per cent), Canberra (0.1 per cent) and Darwin (1.1 per cent). 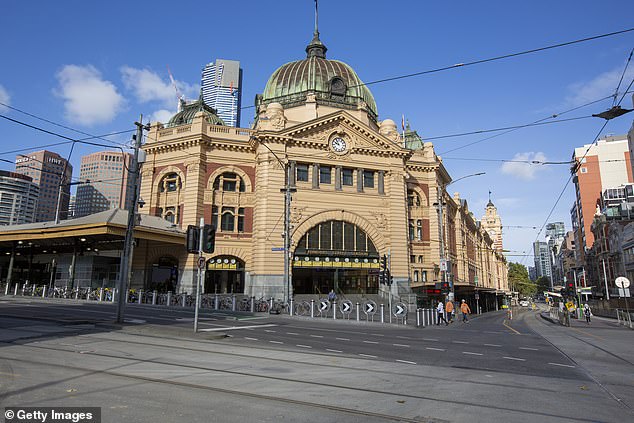 The coronavirus lockdowns have hit Melbourne (Flinders Street station during lockdown pictured) harder than any other property market, new data showed. Median house prices fell by 0.4 per cent in April, making it the only Australian mainland state capital to suffer a decline, CoreLogic data showed

Apart from Melbourne, Hobart was the only other capital city to see a fall in mid-point values, with house prices down 0.2 per cent as Tasmania became an island state with its borders closed to the rest of Australia.

How COVID-19 has affected house prices

CoreLogic head of research Tim Lawless said the closure of Australia's border on March 20 to everyone but citizens and permanent residents was likely to hit Sydney and Melbourne more than any other state capital city.

Investors urged to avoid off-the-plan apartments and property in ...