California's governor Gavin Newsom has been slammed by critics for publishing a list of things the county's citizens are allowed to do during coronavirus lockdown - including singles badminton, tree climbing, BMX biking and watching the sunrise.

And as Huntington City Council voted 5-2 to take legal action against the order, the Orange County Sheriff Don Barnes vowed 'not to take enforcement action'.

'Governor Newsom's mandate to close all beaches in Orange County today was a jarring decision that significantly impacts us here in Huntington Beach,' Mayor Lyn Semeta said in a statement. 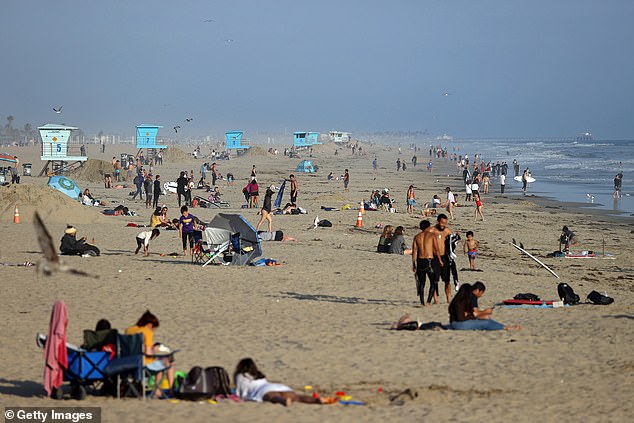 'Given that Orange County has among the lowest per-capita COVID-19 death rates in California, the action by the state prioritizes politics over data, in direct contradiction of the Governor's stated goal to allow science and facts to guide our response to this horrible global pandemic.'

The council voted to seek 'any and all legal actions necessary' to challenge Newsom's order.

The county has 50,000 confirmed cases of coronavirus, and 2,036 people have already died from the deadly novel virus.

Gov. Newsom took action to close the beaches yesterday after 'disturbing' images showed masses of residents flock to the sands over the weekend - ignoring the state's stay-at-home order.

The governor had been expected to shutter all beaches and state parks across California from today, after a leaked memo from Newsom's administration to the California Police Chiefs' Association surfaced Wednesday.

But Newsom announced during a press conference Thursday the new order only applies to state and local beaches in Orange County. 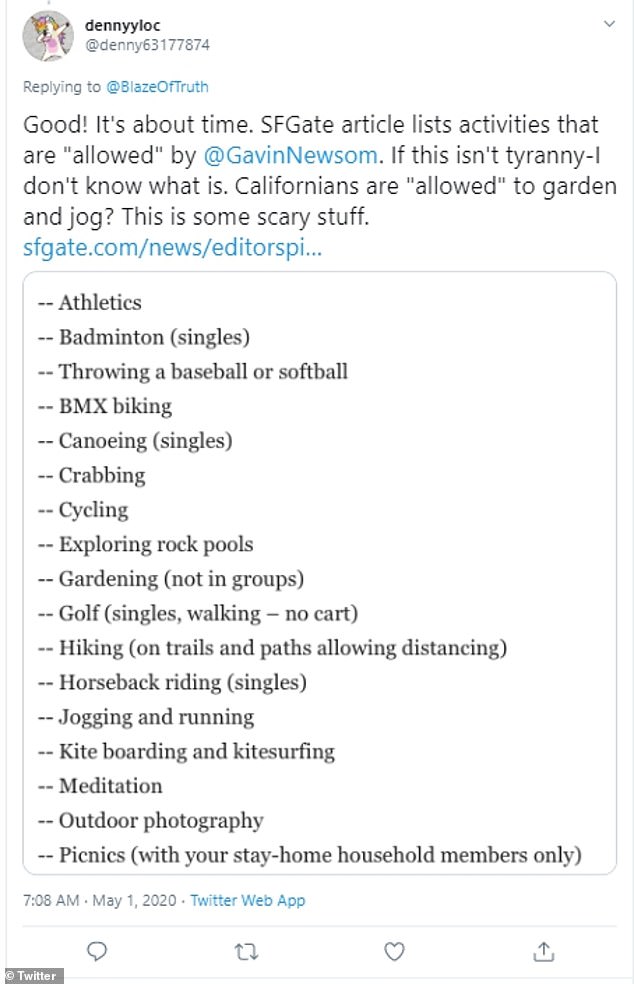 'Orange County has been on our list of health concern and they've done a wonderful job down there, I just think we can tighten that up a little bit. So we're going to have a temporary pause down there,' he said.

Throwing a baseball or softball

Gardening (not in groups)

Picnics (with your stay-home household members only)

Scootering (not in groups)

Skateboarding (not in groups)

Throw and catch an American mini football, Frisbee or Frisbee golf (not in groups)

Watch the sunrise or sunset

'Everyone saw those images and we're all concerned about that. ... That's what ultimately led to this decision,' Newsom added.

Meanwhile Gov. Newsom was blasted for telling people the activities they were allowed to do during lockdown, SFGate reported.

'We want you to see sunsets,' he said. 'We want you to enjoy activities outdoors. What they don't want is people congregating outside in large groups.'

One said: 'Lol, meditation is approved on the list @GavinNewsom put out. Oh, thank you for not policing my brain activities. That’s so lenient of you.'

Another added: 'SFGate article lists activities that are "allowed" by @GavinNewsom. If this isn't tyranny-I don't know what is. Californians are "allowed" to garden and jog? This is some scary stuff.'

One wrote: 'Wait. No hopscotch? I sure hope he revises his list of sanctioned activities.'

Another user penned: 'Oh my, I'm SO GRATEFUL that my Lord and Master @GavinNewsom has graced us with a list of outdoor activities that we are ALLOWED to do! Huzzah! Let us peasants bow on bended knee & vow to be worthy of his merciful thoughtfulness!!'

Another said: 'Meanwhile, in CA, Gov. Gavin Newsom announced the activities we peasants are allowed during the lockdown.

'I’ll see you at the State Capitol protest tomorrow while the governor sits atop his throne and whittles away at this list of allowable activities.'

It comes after Newsom admitted he felt under pressure to lift coronavirus lockdown restrictions following moves from other US states but said he won't bow to it.