Bodycam footage has captured the moment a thug spat blood in a female police officer's eye as he was being arrested.

Temisan Oritsejafor launched the sickening attack on PC Annie Napier as she detained him after he assaulted his neighbour.

Police video shows the 41-year-old spitting at the officer while he was being handcuffed at his flat in Wyken, Coventry, on April 18.

Oritsejafor was on bail at the time for a previous assault on a police officer.

In a separate case today, 25-year-old Zeb Fitts was jailed for eight months after he spat at two NHS nurses as they tried to treat him. 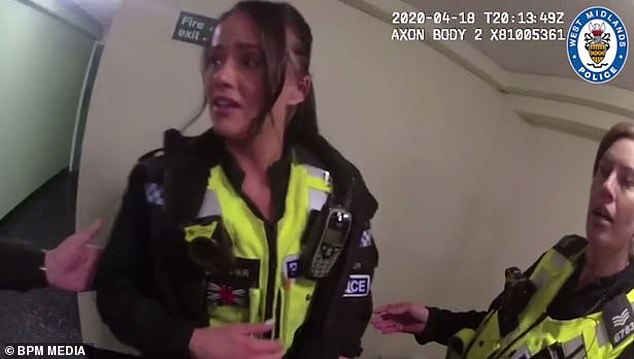 Temisan Oritsejafor launched the sickening attack on PC Annie Napier. A visibly upset PC Napier can be seen telling colleagues, 'he got me in my eye, I'm alright, I'm just worried about coronavirus' while they try to comfort her.

In the clip, a male officer then gets him in a headlock and wrestles him to the floor.

A visibly upset PC Napier can later be seen telling colleagues, 'he got me in my eye, I'm alright, I'm just worried about coronavirus' while they try to comfort her.

PC Napier suffered no ill-effects and remains on active duty.

Oritsejafor, who suffers from schizophrenia and is bipolar, admitted common assault and two charges of common assault on emergency workers at Warwick Crown Court on Tuesday.

He was remanded in custody and told to expect a significant jail term when he is sentenced at a later date.

After the case, PC Napier said: 'As frontline officers, we know that we put ourselves in potential danger, but we now face the added risk of Covid-19 infection which then also puts our families at risk.

'It's a shock when someone spits in your face and very unpleasant, so I'm pleased the force and the courts take these assaults so seriously.'

Superintendent Jenny Skryme, of West Midlands Police, added: 'It is vulgar and unacceptable to spit at anybody, but even more so a key worker who is putting themselves at risk to keep people safe and catch criminals.

'Our officers are bravely and repeatedly

PREV Violent protests shine spotlight on extremists, from antifa to 'Boogaloo'
NEXT Bar owner will not be charged with shooting and killing Black Lives Matter ...