More than 75 per cent of Britons support extending the lockdown next week, according to a new poll - amid fears widespread 'coronaphobia' could stop the country getting back up and running.

A new YouGov poll of 3152 adults has revealed that 77 per cent would like to see the lockdown continue while just 15 per cent are opposed to the move.

It comes as Boris Johnson is set to unveil his 'comprehensive' lockdown exit plan next Thursday. Frantic work is under way in Whitehall on how businesses can resume activities, with every day on hold estimated to wipe around £2billion from GDP.

Staff working every other week, wearing PPE in canteens, and face coverings on public transport are all being mooted to help reduce the risks.

The UK population appears to be among the most anxious in the world, with more than a quarter saying lockdown should not be eased even if the PM's 'five tests' are met.

There are reports that some people who have returned to work have been getting abuse from neighbours who believe they are threatening their safety.

Ministers have admitted they must win over the public to a more 'nuanced' message, with advisers saying the stark 'stay at home' warning might have been too successful over the past six weeks.

The UK has today announced 739 more coronavirus deaths, taking Britain's official fatality toll to 27,180;  A top midwife has warned coronavirus could lead to a surge in baby deaths because women enduring a difficult pregnancy are afraid to go to hospitals;  Ministers are facing demands to push for South Korea-style contact tracing after Matt Hancock declared the 100,000 a day target for coronavirus tests has been met;  There are claims a deadline of the end of the month is being set for full contact tracing to be in place - but that is later than the mid-May timetable previously mooted;   Labour leader Sir Keir Starmer has accused Mr Johnson of being 'slow at every turn' in the response to the crisis and demanded an exit strategy from lockdown as soon as possible;  Experts said it was 'perfectly reasonable' for the UK to start easing lockdown before a contact tracing regime is fully in place';  Ryanair has announced 3,000 job cuts as it revealed it expects to operate under 1 per cent of its schedule between April and June;  Heathrow chief executive John Holland-Kaye has warned that social distancing at airports is 'physically impossible';  The ONS has published local breakdowns of coronavirus-related deaths suggesting deprived areas with high BAME populations are most at risk.

YouGov asked 3152 British adults: The next government lockdown review is on May 7th. Would you support or oppose extending the current lockdown beyond 7th May? 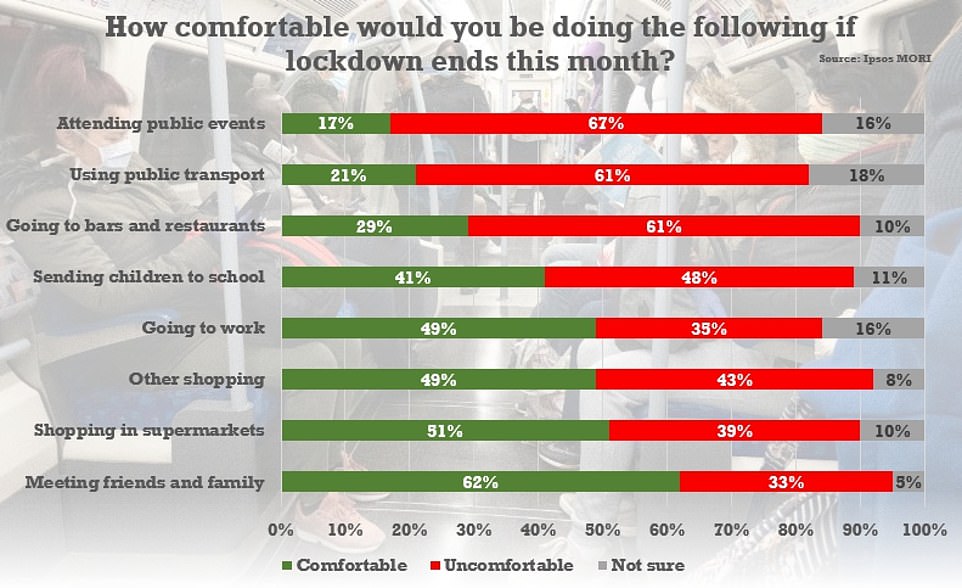 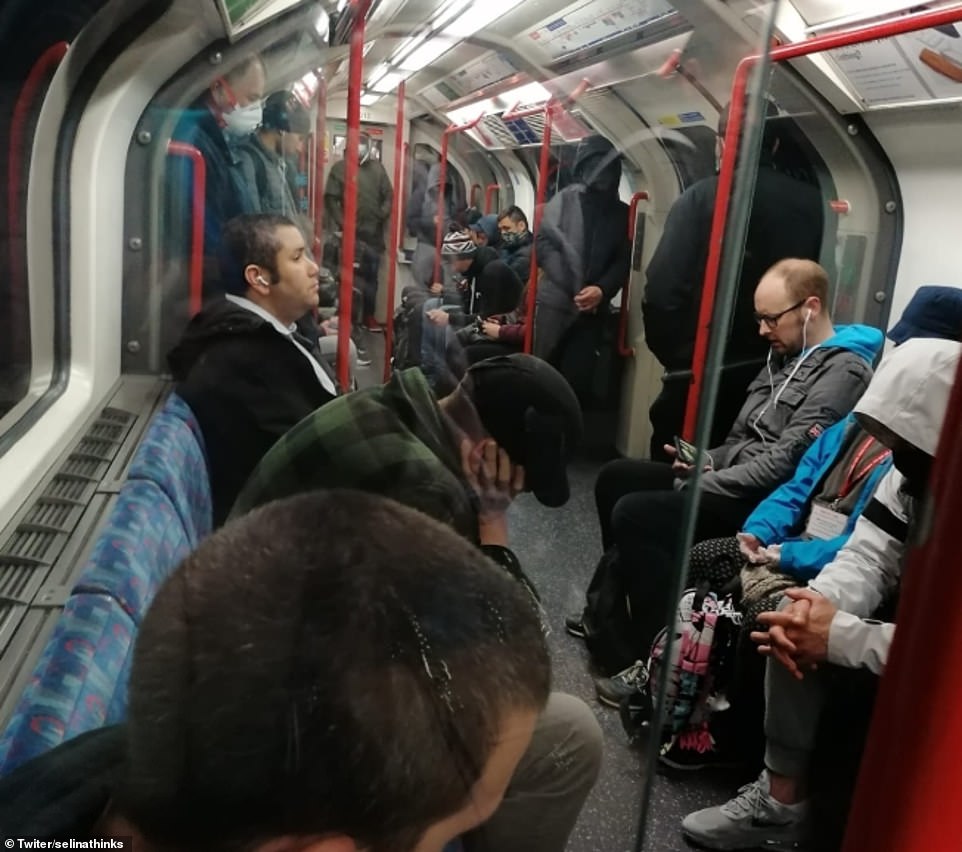 No more lock down in London, Everyone is out and about, packed Victoria line underground station today. #NHSThankYou #tfl #coronavirus #MayDay #StayHomeSaveLives #TFL pic.twitter.com/OYgdSL2CNQ

this morning are still unable to stay two metres apart, even though services are less busy than before the coronavirus lockdown 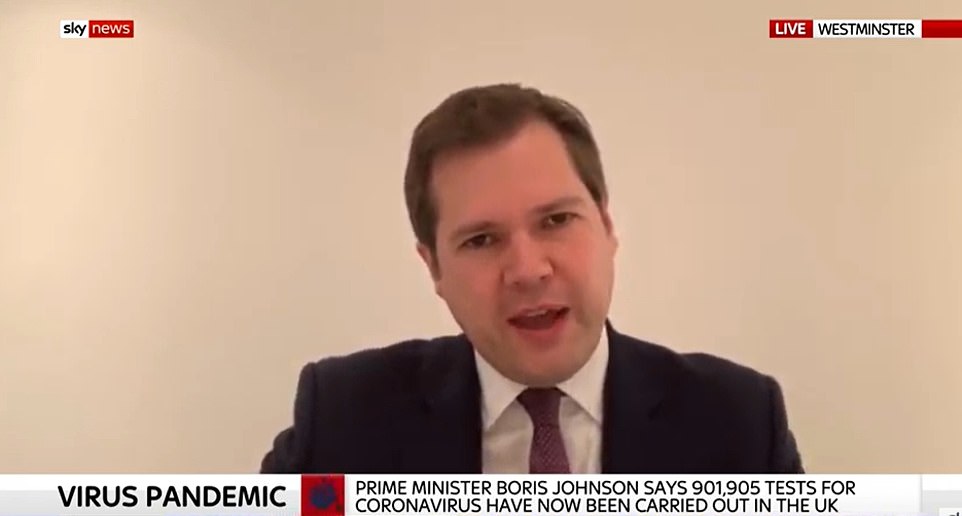 In a round of interviews today, Housing Secretary Robert Jenrick admitted that getting UK plc back on its feet would require the public accepting a more 'nuanced' message

YouGov also asked 3152 British adults: Are you planning on going on holiday abroad this year?

Ministers were urged to get a South Korea-style grip on the coronavirus outbreak today after it emerged the 100,000 a day target for tests is on the verge of being met.

Government sources believe the goal set by Matt Hancock will be achieved when the figures are officially announced this afternoon following a last-minute surge - although they stressed it could not be 'taken for granted'.

However, Mr Hunt, a former health secretary himself, insisted it is now crucial to use the capacity to introduce South Korea-style mass screening.

He said that would enable the lockdown to be 'targeted' on those who are infected rather than crippling the whole UK economy.

The government is setting another target for having full-scale contact tracing in place by the end of the month - although previously ministers had indicated the hoped it would up and running by mid-May.

Labour leader Keir Starmer has added to the pressure by demanding a timetable for reaching Boris Johnson's ambition of 250,000 tests a day, saying the UK also needs 50,000 contact tracers.

A separate YouGov poll also revealed today that Britons are no longer planning to holiday following the coronavirus lockdown. Some 36 per cent said they were planning a trip but are no longer doing so.

Separate polling has also suggested 61 per cent of Britons would be nervous about going out to bars and restaurants even if the draconian restrictions are loosened.

'It's much harder to frighten to people to stay at home than it is to reassure them they can go out again,' he told BBC Radio 4's Today programme.

'Maybe our whole campaign has been, if anything, slightly too successful.'

Housing Secretary Robert Jenrick admitted that getting UK plc back on its feet would require the public accepting a more 'nuanced' message.

He said that sectors such as housing and construction 'on the whole' could go back to work now as the majority was done outside and could be carried out in accordance with social distancing.

'I think we are, at the moment, where the country can take a message that is slightly nuanced and saying 'this is what you need to do today, but this is what the future looks like so that you and your family can start to prepare'.'

In response to Mr Johnson's optimism that the UK economy would 'bounce back' following the pandemic, Mr Jenrick said he too was confident.

'The fundamentals of the British economy remain sound,' he said.

Welsh First Minister Mark Drakeford said the government will need to 'take people with us'.

'As we move to open up things again, we will be careful and cautious, we will have to take people with us,' he said.

'Our efforts over the last week have been directed at working with our trade unions, our local authorities and other stakeholders because you can open up anything you like, but if people don't think it's safe to take up what is now available to them, they won't come.'

He told the Evening Standard: 'It looks like we are going to be slow on the exit strategy because we are now behind quite a lot of countries in Europe and behind Scotland and Wales.'

According to Ipsos MORI research conducted earlier this week, 61 per cent of the public would be uncomfortable about going out to bars and restaurants or using public transport if lockdown was eased next month.

A third would be concerned about going out to meet friends or family.

Just over half - 51 per cent - would be at ease with shopping in a supermarket while 49 per cent would be comfortable in other shops. 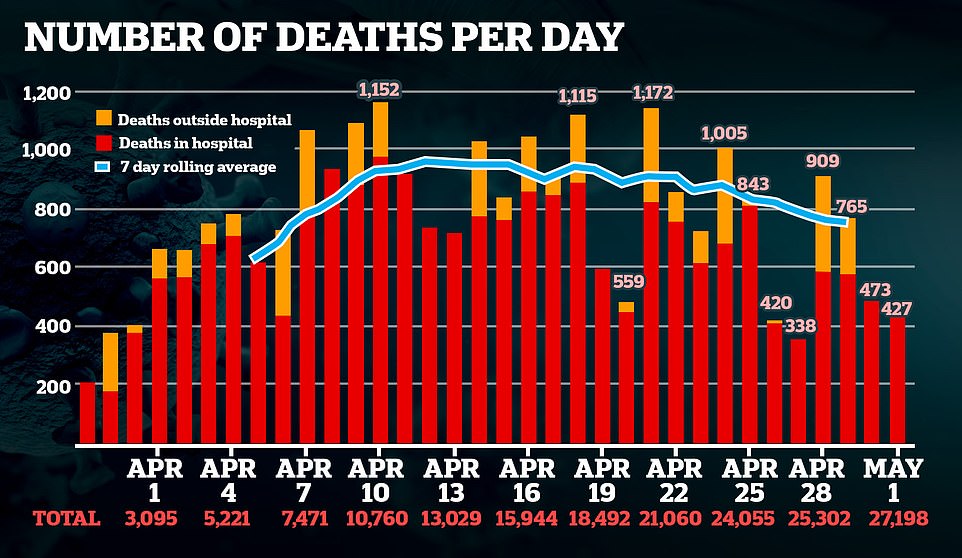 Two-thirds - 67 per cent - would be uncomfortable going to large public gatherings, such as sports or concerts.

David Nabarro, the World Health Organisation's special envoy on Covid-19, said it would be 'perfectly reasonable' for the UK to start easing the lockdown before a full contact tracing system is up and running.

'Every government is having to make a choice and I understand that the contact tracing process is now well advanced and so that's a reasonable time to be thinking through how lockdown can be eased, and it won't be eased all at once, it will be eased bit by bit,' he told Today.

Ministers are under pressure to spell out advice on face coverings

Ministers are facing demands to spell out their advice on face coverings after Boris Johnson said they would be 'useful' as lockdown ends.

Nicola Sturgeon has already urged Scots to don home-made masks - but not medical-grade ones - in shops and on public transport.

But the UK government has so far refused to change its

PREV Confederate monuments collapse: Statues in the South are torn down amid George ...
NEXT Car drives off the edge of a cliff along Victoria's Great Ocean Road

Recession was obvious, whether GDP numbers confirmed it or not