The Government was today accused of 'fiddling' its data to make it look like it had hit its target of testing 100,000 people in a day.

The tests done yesterday, however, were done on 73,191 people because many have to be tested more than once - and almost 40,000 of them were posted out to people and counted on the day.

This suggests one in every three people is tested twice.

People may be tested twice if something goes wrong during analysis, to confirm the result, or if a doctor receives a negative result for their patient and doesn't believe it.

While in other cases someone may be tested again after developing symptoms for a second time but testing negative in an earlier swab, meaning their most recent test is counted but they aren't added again in the head count.

Others may have two swabs taken to be tested at once, one from the nose and one from the mouth, for example, meaning two tests are attributed to one person from the same occasion. 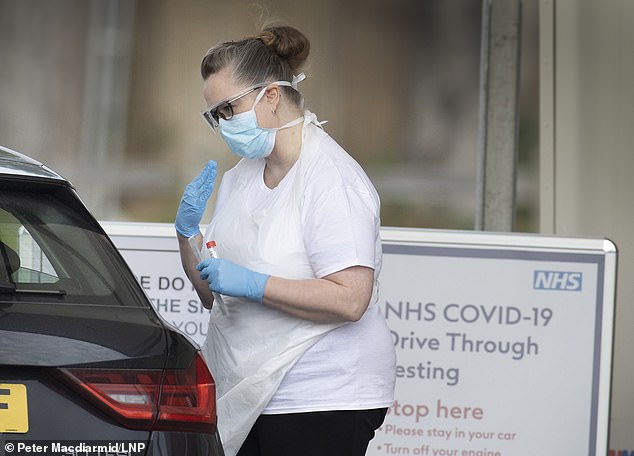 Swab testing is now being offered to anyone working or staying in a hospital or care home,  all essential workers, anyone who has to leave home for work, and anyone with symptoms who lives with someone over the age of 65 (Pictured: An NHS worker at a drive-through testing centre in Chessington, London) 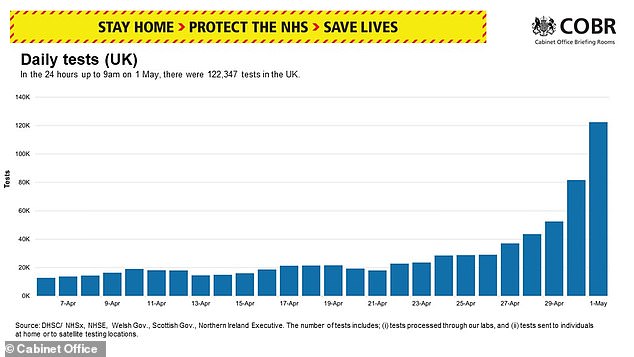 The Government today claimed that it yesterday carried out more than 120,000 coronavirus tests, but faced criticism for counting ones that had simply been posted out to people

Dr Paul Hunter, a former NHS doctor and now medicine lecturer at the University of East Anglia, told MailOnline it was 'valid' to retest people.

'Because the test isn’t 100 per cent sensitive, it can fail for a number of reasons,' he said.

'Some of these reasons are in the labs themselves, where there are all sorts of controls that may go wrong. Sometimes the sample comes in damaged and you have to ask if the patient can send another.

'The other issue is taking a swab. The person who does this might not do it right – for example, they might not manage to scrape against the back of the throat. '

One of the main reasons for multiple tests is likely to be because doctors don't want to misdiagnose someone as having - or not having - the virus.

If someone is hospitalised with coronavirus symptoms and lives with someone else who has tested positive, for example, they would be retested if their first swab comes back negative.

Dr Hunter said: 'It may be that someone has symptoms synonymous with coronavirus – they have a sore throat and fever which has come on suddenly.

'If this patient’s test comes back negative, the clinician might think something went wrong or “I better test them again just in case”.

'I personally wouldn’t criticise the Government for including repeat swabs in their daily count.

'But it should only include swabs that have been examined in the laboratory – not swabs that are posted to people.'

'But many would have expected the 100,000 promise to have been met by actually carrying out testing, not simply because 39,000 kits had been mailed out.'

Professor Keith Neal, an epidemiologist at the University of Nottingham, told MailOnline: 'We know that tests don't always work'.

He added that sometimes people might be tested twice in one go.

'If you do a mouth swab and a nose swab they are separate samples, they would go through the assay separately and would be counted as two tests,' he told MailOnline.

'For in-hospital cases it might be highly appropriate to make sure you don't miss a diagnosis, particularly if you want to rule out COVID-19. If you do two tests the risk of a false negative is lower.' 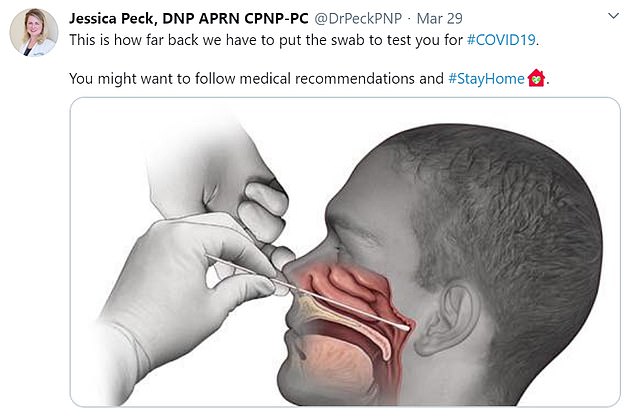 Paediatric nurse practitioner Jessica Peck shared a diagram of how the coronavirus test is carried out on Twitter and said: 'This is how far back we have to put the swab to test you for #COVID19z. You might want to follow medical recommendations and #StayAtHome'

WHAT IS THE SWAB TEST FOR CORONAVIRUS?

Nasopharyngeal swabs are used to detect respiratory viruses, such as the flu and the new coronavirus.

It is the preferred choice for SARS-CoV-2 testing, according to the Centers for Disease Control and Prevention (CDC).

It involves inserting a long, flexible cotton bud into the nostril and along the nose 'floor'. This is supposed to be done slowly so that it is comfortable.

The aim is to reach the posterior nasopharynx, a cavity made up of muscle and connective tissue, covered in cells and mucous that are similar to the nose. It continues down into the throat.

The swab is rotated several times in order to get enough cells.

The sample is then sent to a lab, where it will be tested to determine if the patient’s cells are infected with the virus.

The coronavirus is a RNA virus, which means it uses ribonucleic acid as its genetic material. A process called reverse transcription is needed to transcribe the RNA into readable DNA.

A swab sample doesn't collect much RNA in one go, therefore a polymerase chain reaction (PCR) is used to rapidly make