At 3pm on May 8, 1945, Winston Churchill broadcast to the British people. The man without whom Hitler might well have triumphed recalled his nation’s long and lonely struggle; then, the gradual accession of great allies.

‘Finally,’ he said, ‘the whole world was combined against the evil-doers, who are now prostrate before us.’

Mindful of the toil and travail – and the dying – that still lay ahead to complete the defeat of Japan, he concluded: ‘We may allow ourselves a brief period of rejoicing… Advance Britannia! Long live the cause of freedom! God save the King!’ 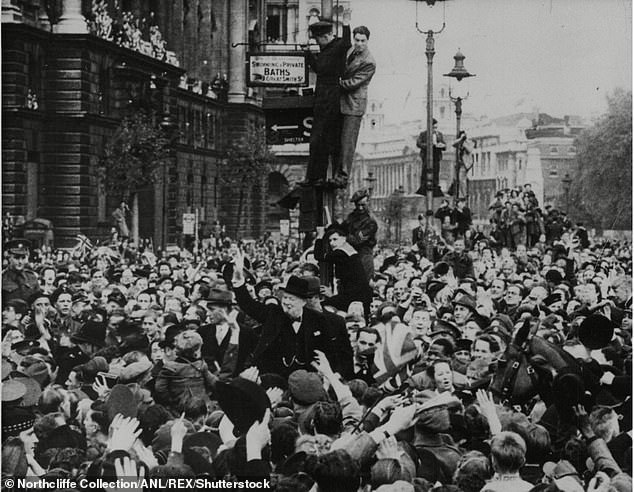 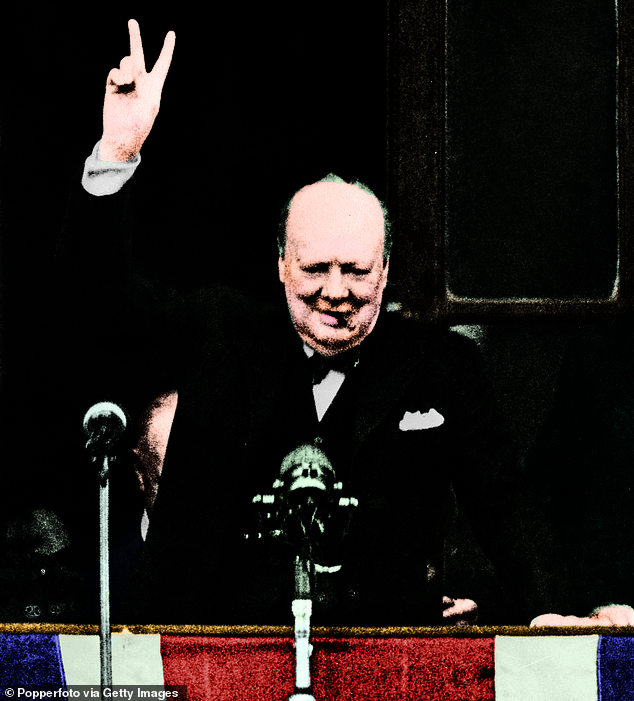 On May 8 1945, Winston Churchill addressed the country in a victory speech from number 10

Churchill’s secretaries and staff lined the garden of Downing Street to clap him to his car as he left, to repeat his words in the House of Commons. From a balcony in Whitehall that evening, he addressed a vast, cheering crowd, saying: ‘My dear friends, this is your hour. This is not victory of a party or of any class. It’s a victory of the great British nation.’

There was massive rejoicing in the streets of London that day and night, driven partly by the knowledge that the great evil of Hitler was no longer; but even more so, by the jubilation among revellers that after almost six years of hardship, fear and sacrifice, they might now hope to live out a full life, rather than facing death by bomb or bullet.

Yet to understand VE Day, what it meant and did not mean to the world, it is essential to recognise how many millions continued to exist in terror, hunger and mortal peril. 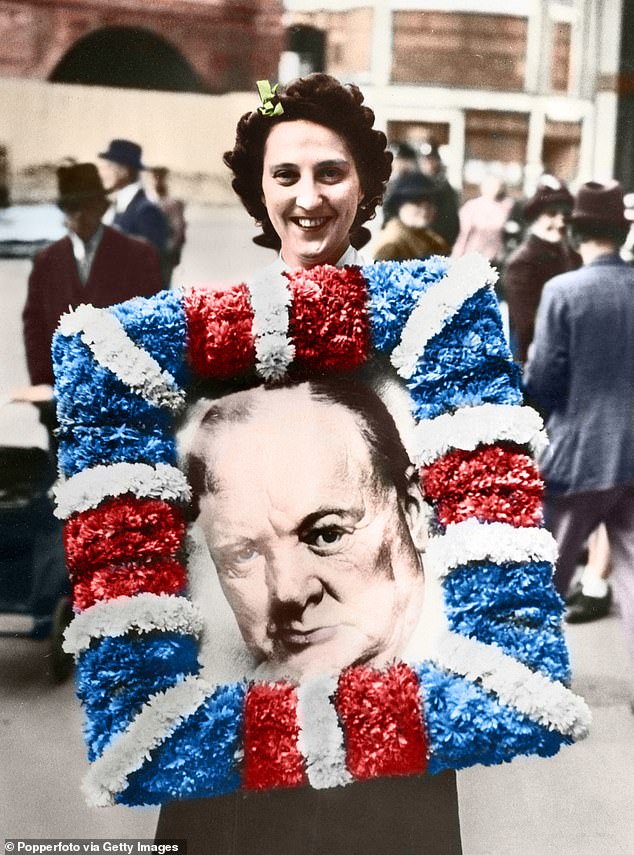 George Macdonald Fraser, author of a wonderful memoir of the Burma campaign as well as being creator of the Flashman books, described how, on May 8, his battalion of the Border regiment was about to attack a Japanese-held village when a young officer ran out in front of the start line and shouted exultantly: ‘Men! The war in Europe is over!’

George, who was a good friend of mine, wrote: ‘There was a long silence, and then somebody laughed, and it ran down the extended line in a great torrent of mirth, punctuated by cries of, “Git the boogers oot ’ere!” Then they attacked. And some Borderers died.’

In Australia likewise, there was little celebration of the end of the far, far-away European conflict. One man in Sydney spoke for thousands when he demanded: ‘How can the British be so cheerful? Don’t they know about the 8th Division?’

This was the Australian formation that had landed at Singapore days before its 1942 surrender. On May 8, its survivors remained at the mercy of their Japanese captors’ barbarism, and continued to die through until August 1945.

In Britain there was partying, surely enough, but it was tempered by melancholy about all those who could not be there to share it, because their graves lay beneath the seven seas or one of a hundred battlefields across the world.

Lancashire housewife Nella Last, one of the war’s great diarists, wrote of a sense of anti-climax: ‘I feel as if I’d sat through a long, tedious play, only living for the finale, longing for the time I could breathe sweet air, go home… and as if, instead, as each player had left the stage, they had disappeared and the lights gradually dimmed, till the last performer had said, “That’s all – you can go home now.” And all the audience had looked at each other, uncertain of the next move.’ 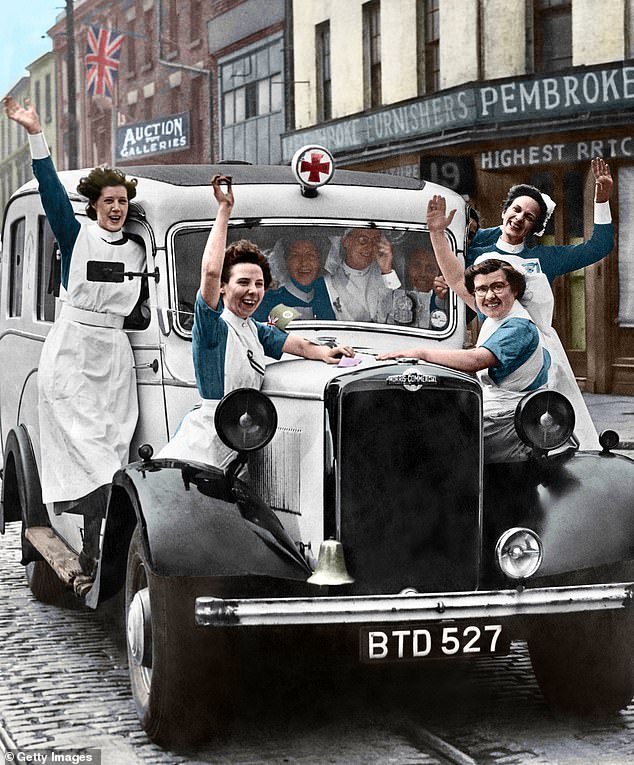 There was weariness after six years of war, of interminable separations from loved ones, of cities suffused with dust and squalor and of the oppressive blackout that had depressed the spirit even when not torn open by flames lit by German bombs or V-weapons.

It seemed easier for Americans to celebrate without inhibition, as new rulers of the world and the only combatants to have made a handsome profit out of the struggle.

Britain, by contrast, was broke – in the words of economist John Maynard Keynes, the nation was facing ‘a financial Dunkirk’. The US Congress terminated Lend-Lease to Britain with brutal abruptness as soon as the war ended. Only a vast American loan, on harsh financial terms, saved Churchill’s nation from bankruptcy. 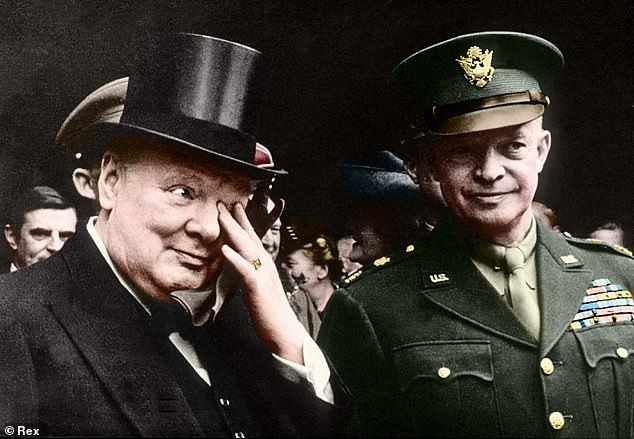 As Nella Last wrote, the overwhelming mood was doubt. Having lived with war for so long, what would peace be like? What would the future hold for young men and women who had spent their entire lives since adolescence in uniform, when they donned ‘civvies’?

What might happen to their country, impoverished by playing, for so long alone, its historic role of defying the forces of evil?

Pilot Richard Hough was dozing on a heap of kitbags in a Dakota over the Channel, homeward bound after a tour flying Typhoon fighter-bombers, when a crewman suddenly pulled open the cockpit door and shouted: ‘It’s f***ing over!’ Most of the plane’s passengers went crazy, hurling kitbags wildly at each other. An airman noticed Hough lying motionless and said: ‘Come on, sir, the war’s over. Aren’t you glad?’

Four million British houses had been damaged by enemy action, half a million destroyed outright – including that of my own grandparents. A huge operation began to clear beaches of the mines and barbed-wire entanglements that had defended them against invasion since 1940. 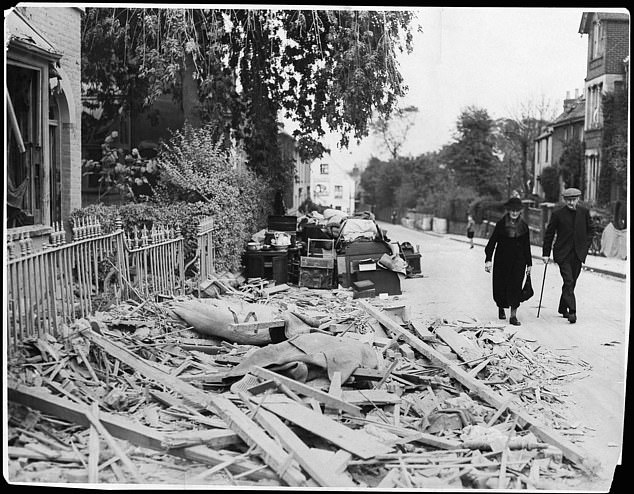 There was scant fare to be had for a victory feast: less meat in shops than a year before, and in May the bacon ration was reduced from four ounces a week to three; the lard ration cut from two ounces to one. In September 1945, the clothing ration was reduced again.

Shop windows now displayed Victory scarves, ribbons, rosettes and hairslides, yet there were shortages even of these.

In Barkers of Kensington, a patient shopper was heard to say: ‘I’ve been in so many queues since the war began, it’s a change to be in a flag queue.’

Among the reasons that Churchill the victor would soon be expelled from power at the General Election was a popular yearning for a social new deal as the ordinary person’s reward for victory.

Five million British servicemen and women were still serving, many in Germany. 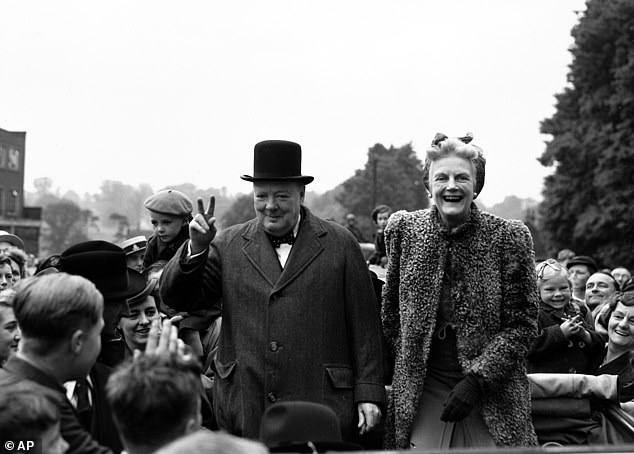 Despite leading the victory celebrations, PM Churchill would not stay in power for long

Alan Moorehead, the greatest British correspondent of the war, wrote from Hitler’s shattered Reich about the flatness that succeeded the

NSW Police has responded to footage of an Aboriginal teenager being hurled to ...