It was hardly the place Marc Benioff ever imagined would be the setting for what he now describes as 'an incredible awakening'. Incense hung heavy in the air as the sound of chanting filled the room. He was in a remote town in India and seated opposite a Hindu spiritual guru called Mata Amritanandamayi, revered as 'the hugging saint' by her followers.

Mr Benioff, a Silicon Valley pioneer, was already wildly successful. A millionaire by 25, he was the youngest ever vice-president of software giant Oracle, drove a Ferrari and seemed to have it all.

But in his heart he knew that something was missing.

He had taken a three-month sabbatical from Oracle to travel the world. 'It was like a scene from a movie,' he recalled. 'We're in the middle of nowhere in this tiny Indian village and everybody's dressed in white and orange and there's incense wafting.

'I'm with a friend who is Indian. He's telling her [the guru] about the challenges in his life and his struggles and about this business that he was going to start. I thought he was going to ask her to invest, he was quite aggressive.

'Then she looked right at me and said, 'In your quest to change the world, don't forget to do something for somebody else.' ' 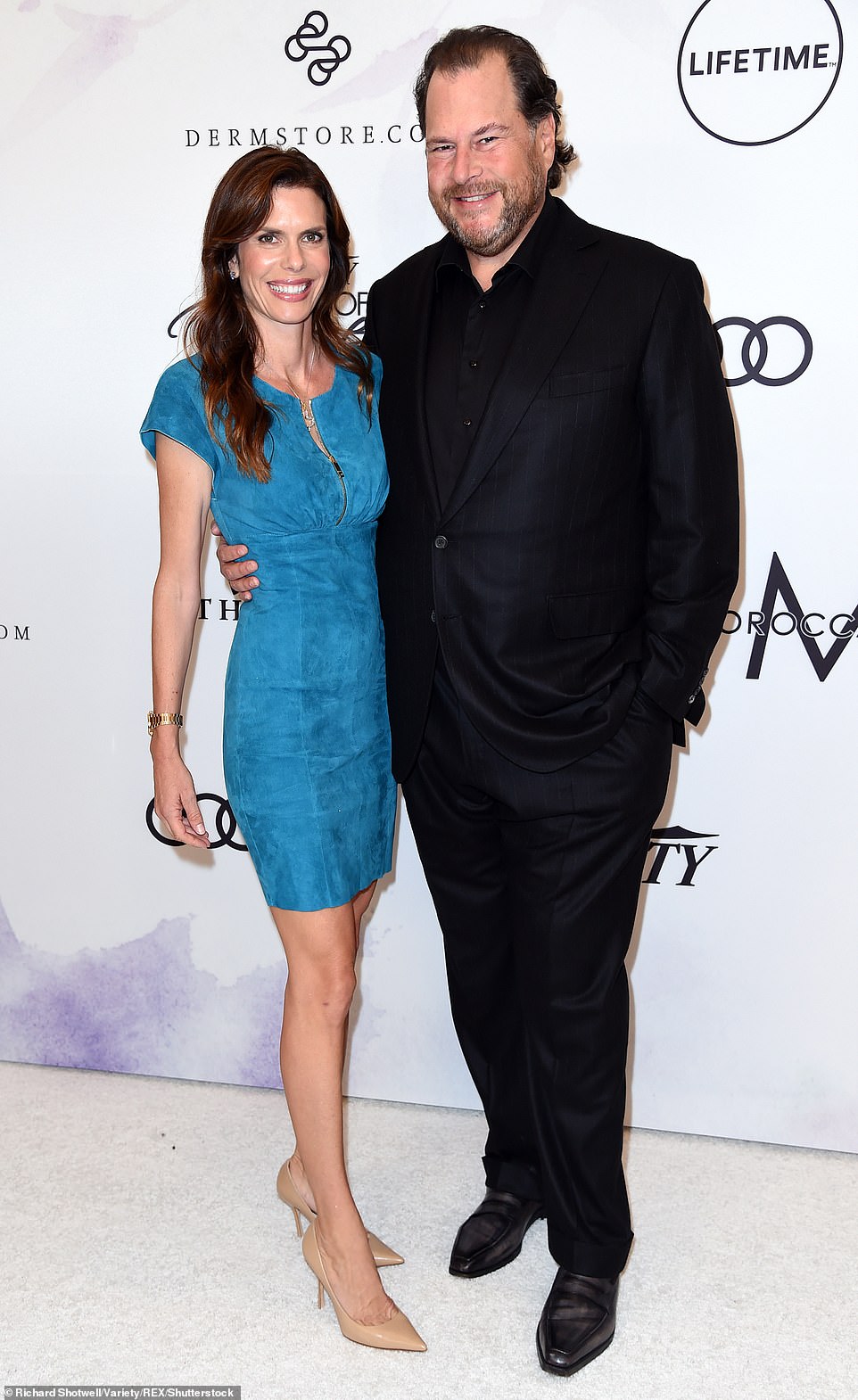 Today, 55-year-old Mr Benioff (pictured with his wife in 2017) is worth £5.5 billion thanks to the success of the company he founded shortly after that encounter, Salesforce, which employs 50,000 people around the globe including more than 1,500 in the UK

It was a comment that would forever change his life.

Today, 55-year-old Mr Benioff is worth £5.5 billion thanks to the success of the company he founded shortly after that encounter, Salesforce, which employs 50,000 people around the globe including more than 1,500 in the UK. His firm is the world leader in 'customer relationship management software' which uses the cloud to help businesses organise information about their customers and has an annual revenue of £13 billion.

He is also one of the world's greatest philanthropists thanks to the encounter with the woman he calls simply 'Amma' ('Mother'). 'It was she who introduced me to the idea, and possibility, of giving back to the world by pursuing my career ambitions,' Mr Benioff said. 'I realised that I didn't have to make a choice between doing business and doing good. I could do both.'

Last week, a consortium led by our sister paper the Daily Mail, and including Salesforce and UK asset management firm Marshall Wace, set up a charity called the Mail Force Charity to tackle the urgent shortage of personal protective equipment (PPE) in the Covid-19 emergency in Britain.

The tech tycoon has already donated £1 million of his fortune to support the charity along with another £1 million from Salesforce. In total he has spent around £20 million sourcing and supplying PPE to hospitals around the world.

HERE'S HOW TO DONATE

Mail Force Charity has been launched with one aim to help support NHS staff, volunteers and care workers fight back against Covid-1 in the UK.

Mail Force is a separate charity established and supported by the Daily Mail and General Trust.

The money raised will fund essential equipment required by the NHS and care workers.

This equipment is vital in protecting the heroic staff whilst they perform their fantastic work in helping the UK overcome this pandemic.

If we raise more money than is needed for vital Covid-1 equipment, we will apply all funds to support the work of the NHS in other ways.

But his generous contribution is only the tip of the iceberg.

The man the New York Times calls 'the hyperconnected billionaire' has used his personal friendships at the highest echelons of the global business world to succeed where governments and bureaucrats have failed; to source and then transport high-quality PPE to those who need it most, including here in the UK.

Mr Benioff, who along with his wife Lynne donated £200 million to build two children's hospitals in their native San Francisco, phoned friends like Daniel Zhang, the chief executive of Alibaba – the giant e-commerce marketplace and China's equivalent of Amazon – who immediately offered to help.

He also called on long-term business associates such as Fred Smith, the founder of FedEx, whose son Richard helped to arrange to transport the PPE at a discounted rate.

'We have two dozen dedicated employees who have canvassed the world for PPE and built a database using our technology,' he said. 'We know where to get everything and we have all types of modes of transportation.'

Mr Benioff spoke to The Mail on Sunday via Zoom from his home overlooking San Francisco Bay, where he has been in lockdown during the pandemic with his wife and their two children.

Like most of us, corporate wear has disappeared and been replaced by a casual blue sweatshirt and baseball cap.

A giant bear of a man – he is 6ft 5in – he could not be more different from the traditional image of a nerdy Silicon Valley billionaire.

He is quick to laugh, affable and charming, and clearly passionate about the work he is doing during lockdown and particularly the work of the Mail Force Charity.

'This virus does not discriminate. It doesn't matter what religion you are, or gender, or sexual orientation or the colour of your skin.

'The virus goes after all of humanity with equanimity, so that is unifying for us to realise that we are one community.

'I'm here in San Francisco and I'm perched on a cliff and when I look out the air has never been clearer, the water has never been bluer, there's animal life landing here on the beaches in California that we haven't seen for a long time. We're being presented with a new level of harmony with the planet and being asked, 'Can we achieve a new balance in our lives and what will that mean?'

'At the same time we have our hearts open to the tremendous suffering that's happening in the world. So many families have been affected, so many people have lost their lives and that's first and foremost why we're doing this work with PPE, because of human suffering.' 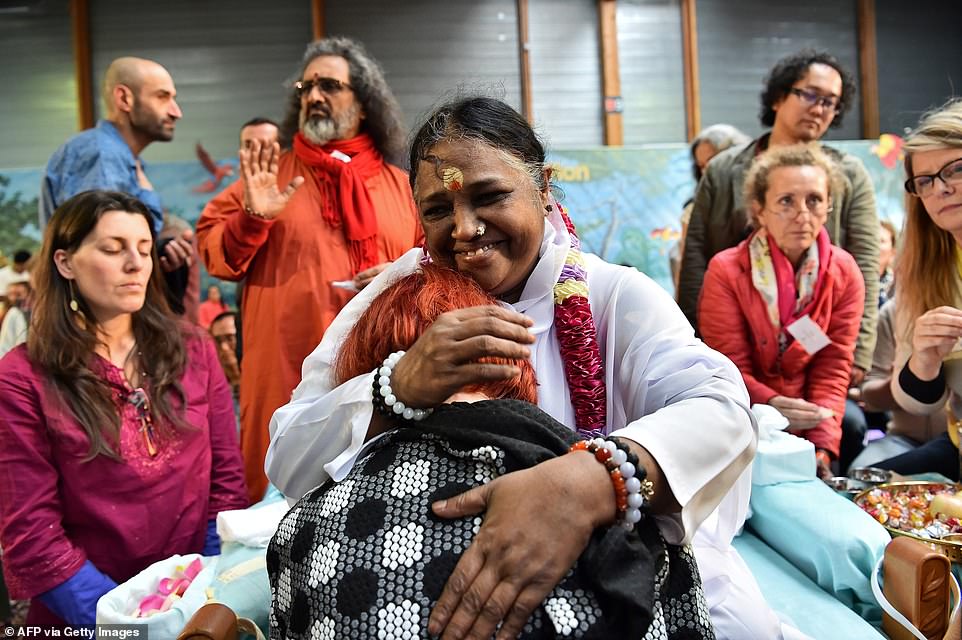 Indian spiritual leader Mata Amritanandamayi (centre), popularly know as 'Amma' (The Mother) or also as 'The Hugging Saint,' hugs a woman during a followers's gathering in 2016

At least 50 employees at Salesforce have been affected by coronavirus – so this fight is personal.

For Mr Benioff, philanthropy has