Air travel was the main driver behind the spread of coronavirus, according to a study which adds more weight to the theory that closing borders helps avert major crises.

Brazilian researchers found the nations hit hardest by the killer disease were ones which had busy airports accepting thousands of international flights.

China, which has the second busiest airports, grounded all its flights from the virus’ epicentre in Hubei province on January 23, within weeks of the first diagnosed case.

The US did not lockdown its airports until late March, while Britain’s borders remain open to this day and officials still aren't routinely testing or quarantining travellers.

Damning figures show the UK quarantined just 273 out of 18.1million people who arrived in the UK in the three months before the lockdown was imposed.

Researchers from the Federal University of Bahia in Salvador, who did the study, say screening and isolating travellers may have been 'a cheap solution for humanity'.

It comes on the back of MailOnline analysis that suggested countries which banned international travel fared better in controlling their outbreaks. 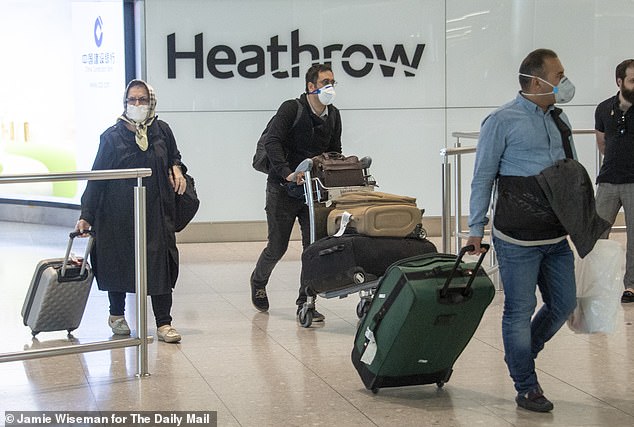 Air travel was the main driver behind the spread of coronavirus, according to a study in Brazil which comes as the UK's government policy of not screening arriving passengers comes under scrutiny (travellers arrive at Heathrow in London) 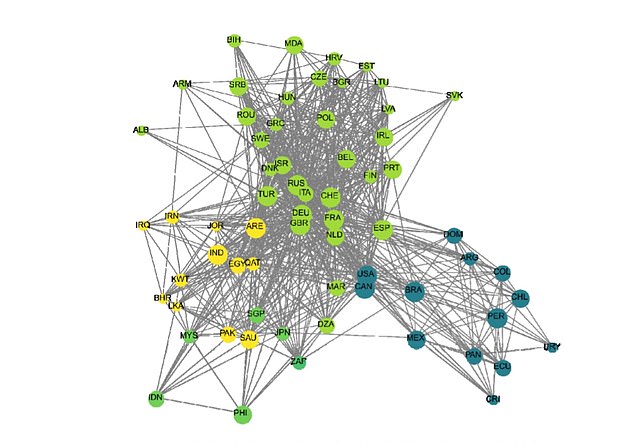 Researchers from the Federal University of Bahia in Salvador scoured records of 7,834 airports using online flight databases to identify more than 67,600 transport routes in 65 countries (shown) 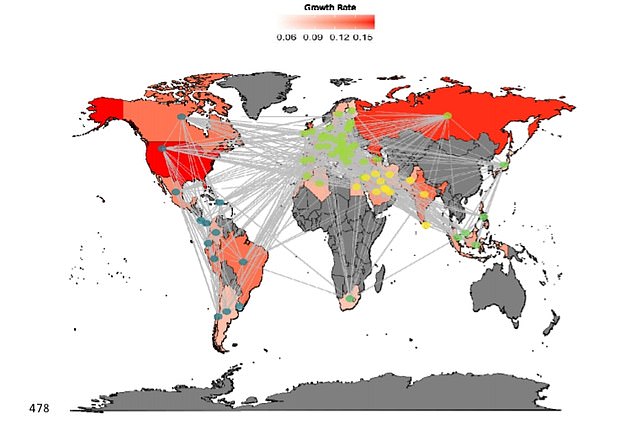 Red colours in different countries represent growth rates of COVID-19. China is seen as grey because it has thought to have beat its crisis

The research, which has not yet been published in a journal or scrutinised by other scientists, assessed how climate, economic and air transport affected the size of outbreaks in 65 countries which had more than 100 cases.

They found climate had little effect on the virus' spread, rubbishing the theory that hot temperatures and high humidity kill off the disease.

And the researchers said socioeconomic factors - such as how rich a nation is or how well-funded their healthcare systems are - played a 'mild role'.

They concluded that global air travel was the ‘the main explanation for the growth rate of COVID-19’.

Britain quarantined just 273 out of 18.1million people who arrived in the UK in the three months before the coronavirus lockdown, damning new figures reveal today.

The occupants of three flights from the outbreak ground zero in the Chinese city of Wuhan and another bringing home passengers from a cruise ship of Japan were the only ones taken to secure facilities in the UK.

But millions more entering the UK between the start of 2020 and March 22 were able to enter freely and only advised to self-isolate, according to figures obtained by the Guardian.

It came as it also emerged the UK suffered a 'big influx' of coronavirus from arrivals from Italy and Spain who were not quarantined.

Mapping of the Covid-19 genome shows that UK cases come from all over the world, chief scientific adviser Sir Patrick Vallance told MPs.

But a large number of cases in early March were from Europe and 'seeded right the way across the country' because Brits arriving back in the UK were allowed to return home.

Giving evidence to the Health and Social Care Committee this morning, Sir Patrick said that experts on the Scientific Advisory Group for Emergencies (Sage) had advised ministers they would have to be 'extremely draconian' in blocking travel from whole countries otherwise 'it really was not worth trying to do it.'

'Whether that was people returning from half-term, whether it is business travellers or not, we don’t know,' he told MPs.

'But a lot of the cases in the UK didn’t come from China and didn't come from the places you might have expected.

'They actually came from European imports and the high level of travel into the UK around that time.'

They found that countries with the highest volume of international flights were at the highest risk of major crises.

Writing in the study, the academics said: 'The 2019 - 2020 world spread of COVID-19 highlights that improvements and testing of board control measures (i.e. screening associated with fast testing and quarantine of infected travellers) might be a cheap solution for humanity in comparison to health systems breakdowns and unprecedented global economic crises that the spread of infectious disease can cause.'

They added: 'We tested the effect of three classes of predictors... socioeconomic, climatic and transport, on the rate of daily increase of COVID-19.

'We found that global connections, represented by countries’ importance in the global air transportation network, is the main explanation for the growth rate of COVID-19 in different countries.

'Climate, geographic distance and socioeconomics had a milder effect in this big picture analysis.

'Our results indicate that the current claims that the growth rate of COVID-19 may be lower in warmer and humid tropical countries should be taken very carefully, at risk to disturb well-established and effective policy of social isolation that may help to avoid higher mortality rates due to the collapse of national health systems.

Data suggests countries that banned international travellers from entering amid the coronavirus pandemic have fared better in controlling their outbreaks.

In Europe, Norway and Denmark closed their borders to all non-citizens by March 13, within two weeks of recording their first cases of the virus. Both countries have recorded just 40 and 87 deaths per million people, respectively, compared to the UK's 438 per million.

Data shows countries that introduced travel bans, such as Austria, have fared better.

On March 15, Austria started refusing entry to anyone without a medical certificate confirming they had tested negative for the virus within the last four days.

Travellers who could not provide proof were placed in mandatory quarantine for 14 days. Austria has suffered just 68 deaths per million of its population.

In the southern hemisphere, both Australia and New Zealand have recorded just four deaths per million people.

On March 19, New Zealand shut its borders to all non-citizens or permanent residents - except for spouses or children under 24. The next day, Australia followed suit.

While the figures appear to paint a clear picture that travel bans work, British experts have told MailOnline there are likely to be multiple contributing factors.

One explanation for the lower death rates in Australia and New Zealand may be the warmer climate - as the virus is known to vulnerable to higher temperatures.

Others may have to do with the differences in responses of each nation's Governments.

Dr Joshua Moon, a research fellow in science policy at the University of Sussex, told MailOnline: 'If you look at NZ, the level of communication and trust as well as the rapid testing, tracing, and isolating completely squashed the outbreak before it got out of control. The same can be said of Denmark. 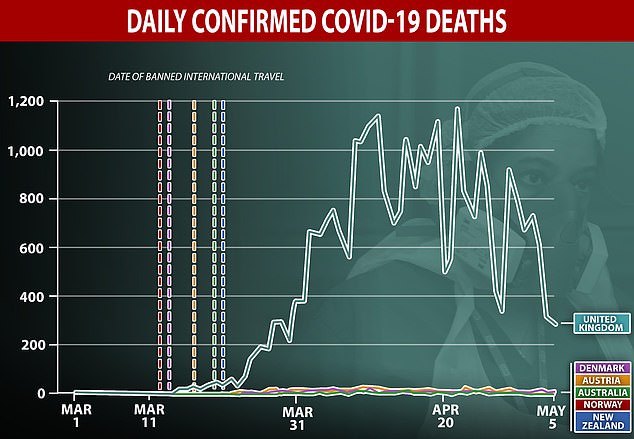 Countries that banned international travellers from entering amid the coronavirus pandemic have fared better in controlling their death rates. Australia, Austria, Denmark, New Zealand and Norway

Madonna dances using one leg as she recovers from knee injury