The world's media has lined up to savage Britain's coronavirus response this week after the UK's death toll surpassed Italy's to become the worst in Europe.

Headlines describe the UK as a 'the problem child of Europe' and the policies of Boris Johnson's government as 'the biggest failure in a generation'.

A shortage of protective gear, a late decision to go into lockdown and an 'inadequate' testing policy are all identified as reasons for Britain's huge death toll.

There is scathing criticism not only from countries such as Germany and Australia which have been widely praised for their handling of the virus, but even from nations such as Italy and the United States where the crisis has been equally severe.

Italian media said the UK had not heeded warnings from northern Italy where the outbreak was in full swing two weeks before it reached a similar stage in the UK.

Australia: The Sydney Morning Herald described the UK's response as the 'biggest failure in a generation', pointing to a series of errors including on testing and lockdown

Germany: A story in news magazine Focus described the UK as Europe's 'problem child' and said Britain's response 'reads like a chronology of failure'

Italy: This headline in Positano News said the situation in Britain was a 'disaster' - as Italian media wondered why the UK had failed to learn lessons from Italy's experience 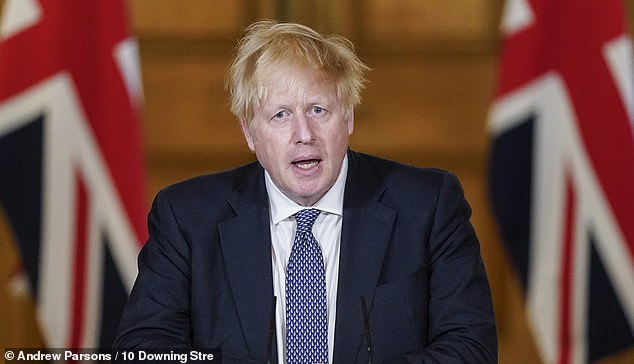 Health secretary Matt Hancock has played down comparisons with other nations, saying that 'different countries are in different stages in this epidemic'.

In Australia, which has seen only 97 deaths after taking early action to shut its borders, the Sydney Morning Herald ran a feature about Britain under the headline: 'Biggest failure in a generation: Where did Britain go wrong?'.

The newspaper described a 'growing chorus' of experts and members of the public who regarded the UK response as a 'series of deadly mistakes and miscalculations'.

The Herald laid out four main failures: a shortage of protective gear, a late decision to enter lockdown, a 'bungled' testing policy, and a failure to protect care homes.

Boris Johnson did not announce a lockdown until March 23, after ministers had initially played down talk of shutting down schools and public gatherings.

The newspaper quoted the editor-in-chief of medical journal The Lancet as calling Britain's response 'the most serious science policy failure in a generation'.

A former Australian envoy to Britain, Mike Rann, said that the early stage of the crisis was handled 'negligently'.

He called Number 10's response 'a shambles of mixed messaging, poor organisation and a complacent attitude that what was happening in Italy wouldn't happen here.'

The article also highlighted Britain's decision to stop testing people in their homes in early March as the virus continued to spread.

'The decision on March 12 to abandon mass testing meant the government could only guess who was infected with the virus and how it was behaving,' it said.

The PM said yesterday that the UK did not have the testing capacity at the time to track down every chain of infection.

Austria: The newspaper Kleine Zeitung used the same expression of 'problem child', saying there were 'wrong measures' and a lack of restrictions

Norway: The digital newspaper Nettavisen said there was 'increasing criticism' that UK authorities had not 'taken the corona outbreak seriously enough'

Italy: The Italian edition of HuffPost blamed 'contradictory choices' for the scale of the UK death toll after it overtook that in Italy 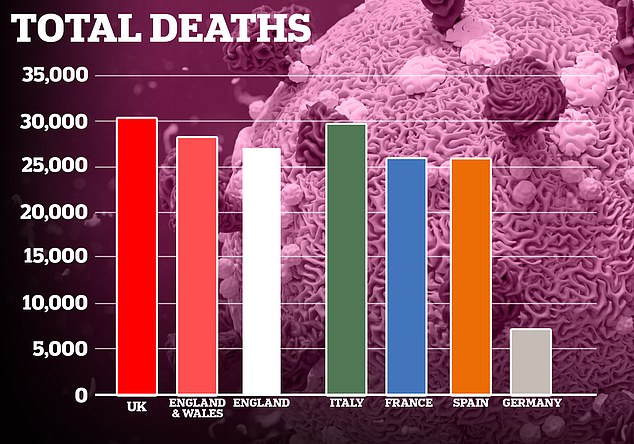 This chart shows the latest number of deaths in several European countries, with the UK in an unwanted lead. Germany's is the lowest despite having the largest population of the five

In Germany, which has seen far fewer deaths among a larger population, the news magazine Focus described the UK as the 'problem child of Europe'.

The magazine accused the UK government of 'carelessness and arrogance' and said Britain's response 'reads like a chronology of failure'.

'There are many signs that the government in London massively underestimated the pandemic,' the article says.

The report said Boris Johnson had 'shown little interest' in the health crisis during February, when the UK's numbers were still small.

It referred to a prime ministerial speech on February 3 when Mr Johnson referred to the 'risk' that the coronavirus would 'trigger a panic and a desire for market segregation that go beyond what is medically rational'.

The article also highlighted Mr Johnson's statement on March 3 that he was still shaking hands.

On testing, the magazine said that Britain's slow conversion to mass testing could have 'cost many people their lives'.

'Only when the Brits became aware of Germany's successes did London convert to mass testing, but that took time,' the magazine said.

In Austria, which has similarly been praised for its mass testing strategy, the newspaper Kleine Zeitung used the same expression of 'problem child' to describe the UK.

The newspaper said the scale of the crisis in Britain was 'a story of wrong measures and a lack of restrictions'.

Highlighting criticism of 'poor crisis management,' the paper suggested that ministers had become complacent when Britain did not initially see a huge surge.

'Politicians were already clapping themselves on the back and praising the health system that was supposedly better prepared for a pandemic than any other,' the article said.

'But that would soon turn out to be a mistake.'

It also referred to how Britain had abandoned mass testing in mid-March only to revive it in recent weeks after seeing how it had worked in other countries.

'It is feared that this late realisation could have cost many people their lives,' the report suggests.

The WHO's advice that countries should keep carrying out as many tests as possible was dismissed as applying only to developing countries, the newspaper said.

United States: A comment piece in the New Yorker referred to 'Britain's coronavirus disaster' and said the UK was having a 'terrible encounter with the virus'

Spain: This story in El Pais pointed out how ministers have tried to play down comparisons between countries as the UK death toll mounts

In Italy, where there has been plenty of introspection about