Railway workers could strike over government plans for an 'army' of volunteers handing out free masks on the London Underground.

Wearing face coverings on public transport will be mandatory by June 15, but the RMT union says the volunteer policy, announced by transport secretary Grant Shapps, was made without consulting staff and is considering taking action in response.

It comes as pressure grows on ministers to rethink proposals after the World Health Organisation (WHO) insisted home-made masks on their own will not provide protection from coronavirus as it called for over 60s to wear medical-grade coverings. 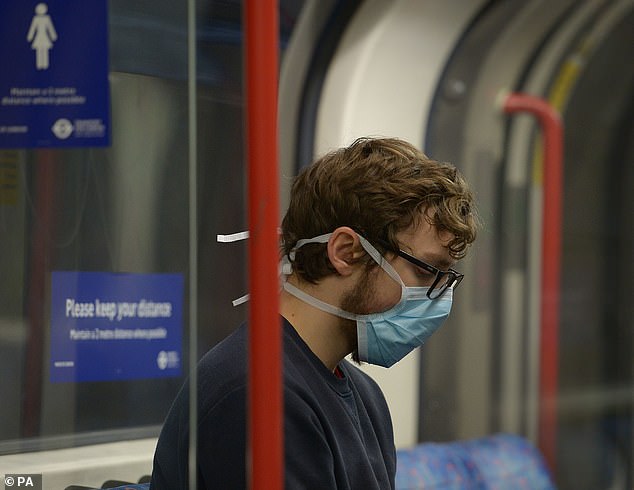 A passenger, pictured yesterday, wears a face mask on the Central Line of the underground 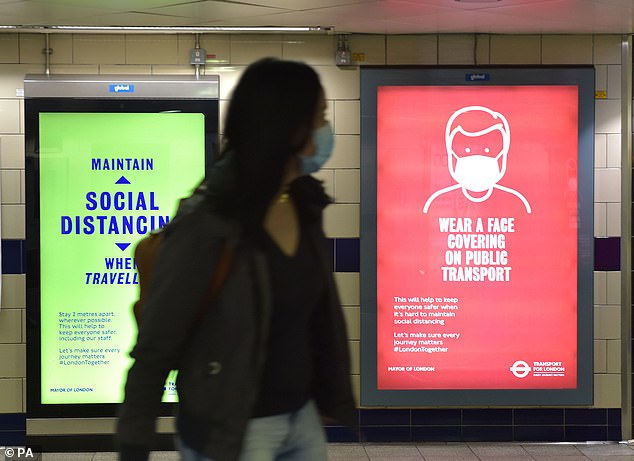 A woman wearing a mask, pictured yesterday, walks past information signs in Bond Street underground station, following the announcement that wearing a face covering will be mandatory for passengers on public transport in England from June 15 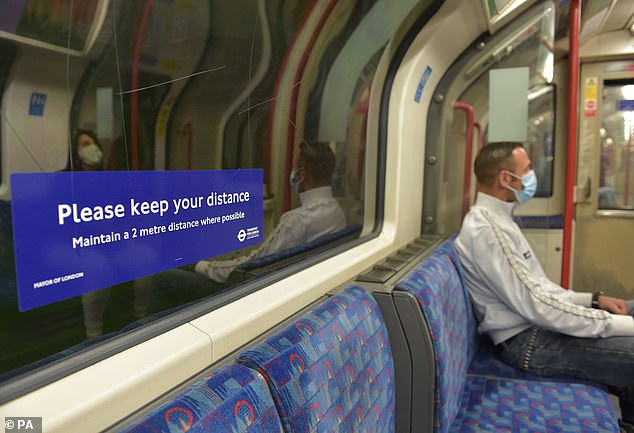 A passenger, pictured yesterday, wearing a face mask keeps his distance as instructed by signs on the Tube

More than a million masks will be distributed at the capital's busiest Tube and bus stations on Monday before the mandatory rules kick on the following week.

'We are going to have thousands of people from the British Transport Police, Network Rail, Transport for London and actually a whole army of volunteers from a volunteer organisation, who are going to be called journey makers, who will help to remind people,' Mr Shapps told Radio Four's Today programme on Friday.

'They will be wearing purple tabards and they will remind you to put your face covering on.'

In a letter earlier this week, the RMT said it was 'furious' that a 'backroom deal' had been done to recruit volunteers 'without even so much as conversation with rail unions' and pledged to fight the move, including balloting members for strike action.

The union's general secretary Mick Cash said: 'There is a real danger that the Government and the Rail Delivery Group are sending out a signal that as long as you cover your face you are safe to ‎head back onto the tubes and trains regardless of whether you are an essential worker making an essential journey.

'That risks a surge in passengers as we saw last weekend with the principles of social distancing blown apart with huge risks to staff and passengers alike.

'It's also clear that the Government and industry bosses are expecting our members to police this policy.

'That will put over-stretched rail workers right in the front line once again and will leave them at risk of being abused, assaulted and spat at by aggressive passengers refusing to comply. 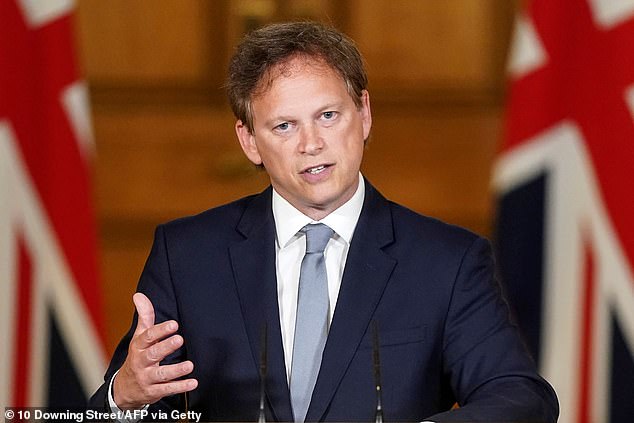 Transport Secretary Grant Shapps, pictured on Thursday, announced an 'army' of volunteers would be handing out masks