A campaign is now underway for a statue to be erected of Jack Leslie, the former Plymouth Argyle footballer who was denied his dream of playing for England due to the colour of his skin.

In 1925 the talented Leslie was poised to become the first ever black player to pull on the England shirt, only for the decision to call him up to the national side be reversed. 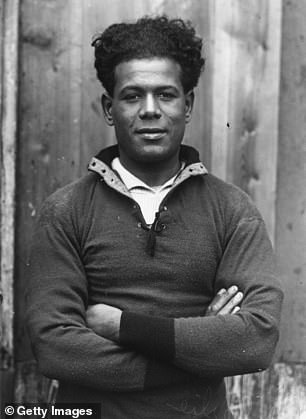 After showcasing his remarkable talent in the old third division with Plymouth, Leslie was selected to play for England against Ireland in Dublin. He would never attend the match.

In the days following Leslie's selection, the national newspapers published the team which instead included Billy Walker, of Aston Villa.

Walker was in the starting line-up whereas Leslie was named as a travelling reserve, after selectors became aware of the colour of his skin. He did not travel to the match, instead remaining in Plymouth and scoring two goals in a 7-2 victory over Bournemouth.

It was not until 1978 that England would field their first black footballer, following the selection of Viv Anderson.

Leslie therefore would have been the first ever black player to play for England, 53 years before Anderson. Now, a campaign group want his legacy to be remembered accordingly, with a statue erected in his honour.

Bill Hern co-author of the book Football's Black Pioneers said: 'Jack Leslie should have been a major figure in the history of British football and society.

'Everyone needs a role model and young black footballers didn't have that major role model in the 30s, 40s and 50s. 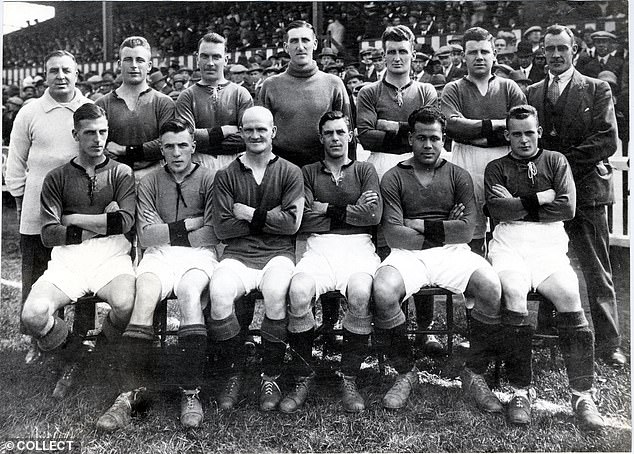 Born to a Jamaican father and English mother Leslie (seen bottom, second from right) became a vital player for Plymouth Argyle and carved a strong reputation for himself 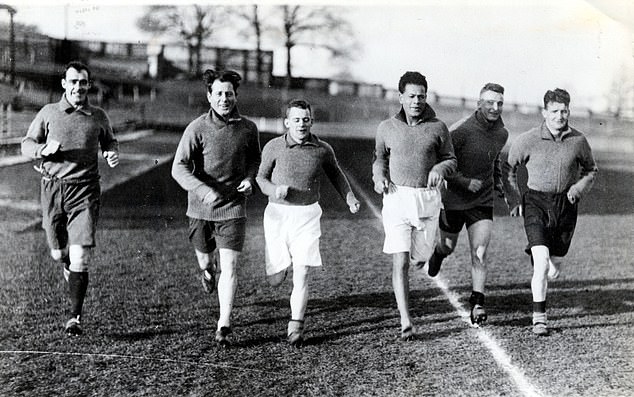 Leslie (third from right) pictured warming up with his Plymouth team-mates. In 1925 his England call-up was reversed after selectors realised the colour of his skin

'Had he played for England as he should have he would have fired the aspirations of generations of young black player.'

Speaking of Leslie's initial selection for the national team his granddaughter, Lesley Hiscott, told the BBC: 'I believe that the manager sent in his request, saying: "I’ve got a brilliant player here, he should pay for England,’”

'So then someone came down to watch him. They weren’t watching his football, they were looking at the colour of his skin.

'And because of that he was denied the chance of playing for his country.'

Following his career Leslie later suggested finding out he was black, for the selectors, must have been 'like finding out I was foreign'.

But he accepted what had happened and according to his granddaughters never expressed any bitterness. They remember him as a kind and loving

PREV Elon Musk says Ghislaine photobombed him at 2014 Vanity Fair party and he ...
NEXT Socialite sued by neighbor for cutting his hedges to 'boost price' of her ...