Hurricane Isaias continues to build up strength as it heads for Florida this weekend, before tracking up the East Coast, potentially threatening the return of two Earthbound American astronauts aboard SpaceX's Crew Dragon ship Sunday.

Hurricane warnings are now in effect in portions of Florida's East Coast and northward to the state's Flagler/Volusia County line after Isaias - while still a tropical storm - destroyed parts of the Dominican Republic and Puerto Rico Thursday.

Hurricane warnings are also ongoing in the northern and central Bahamas, where hurricane conditions are expected to continue into Saturday. 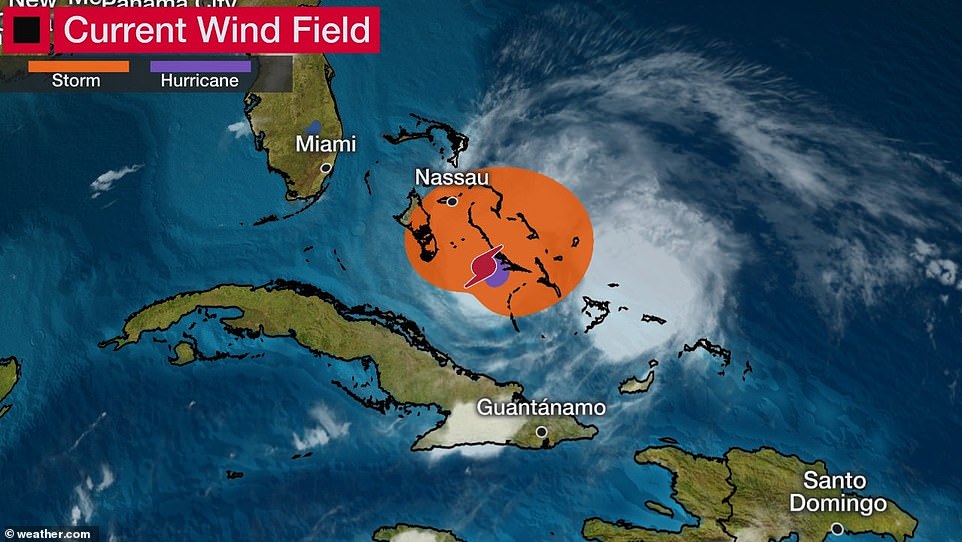 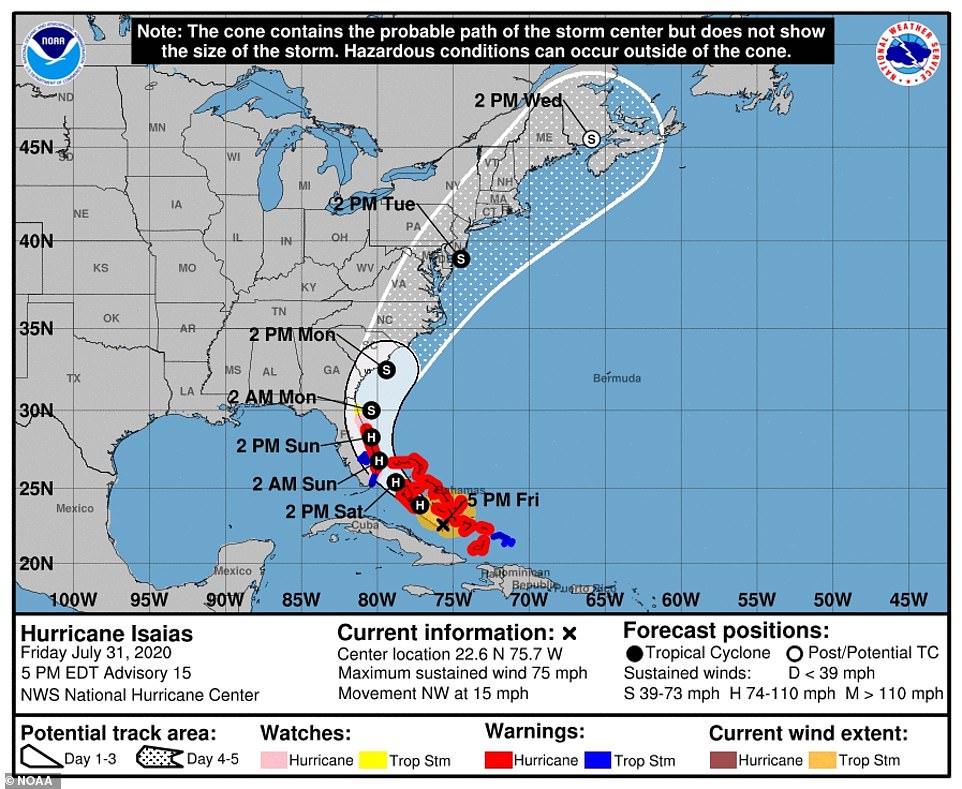 The National Weather Service tweeted out a projected path for Hurricane Isaias, showing it traveling through Florida, along the East Coast all the way up to Maine by Wednesday 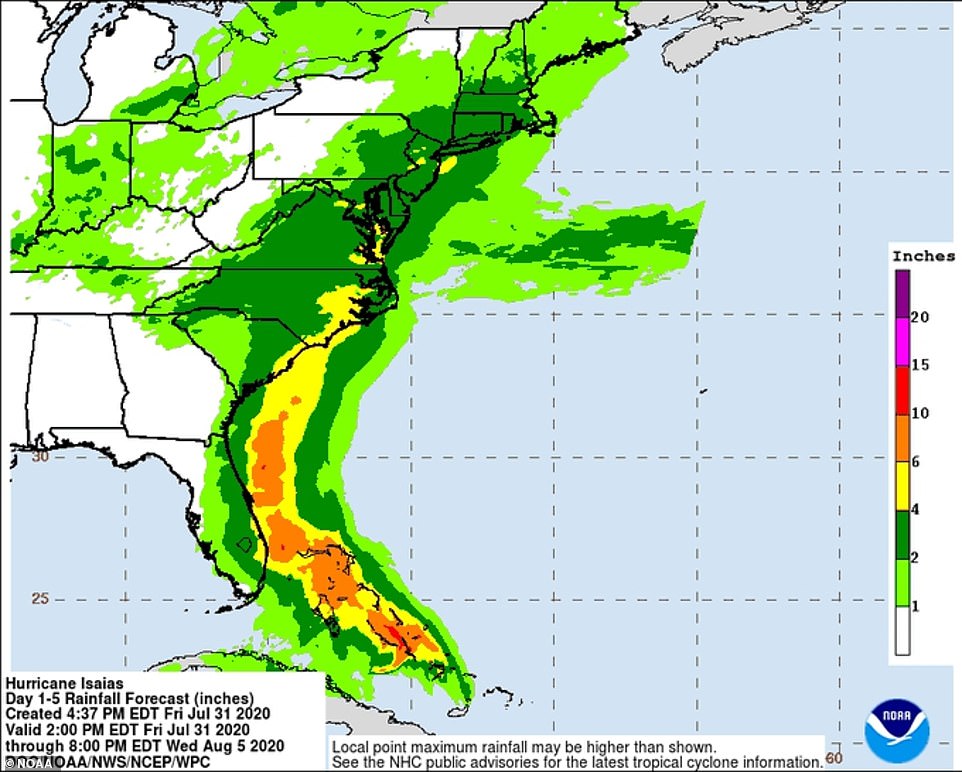 A hurricane watch - usually issued two days prior to anticipated tropical-storm-force winds - is also in effect in portions of South Florida from Boca Raton to Hallendale County, Weather.com reported.

Meanwhile, tropical storm warnings have been issued from the northern Florida Keys to Boca Raton and inland north to Orlando.

On Friday night, Isaias was listed as a Category 1 hurricane with maximum sustained winds reaching up to 80mph and expected to strengthen as the night went on and transitioned into the weekend, according to the U.S. National Hurricane Center in Miami said.

As of early Saturday, the storm was centered about 135 miles (215 kilometers) south-southeast of Nassau in the Bahamas and was moving northwest at 15 mph (24 kph).

Isaias has the potential to disrupt the Sunday return of the first US astronauts to have reached the International Space Station on an American spacecraft in nearly a decade, according to NASA.

Bob Behnken and Doug Hurley blasted off from Cape Canaveral on May 30 on board a SpaceX Crew Dragon and are scheduled to splash down off the coast of Florida on Sunday afternoon.

NASA said Friday that their undocking remains scheduled for approximately 7.34pm Saturday with splashdown at 2.42 pm on Sunday. 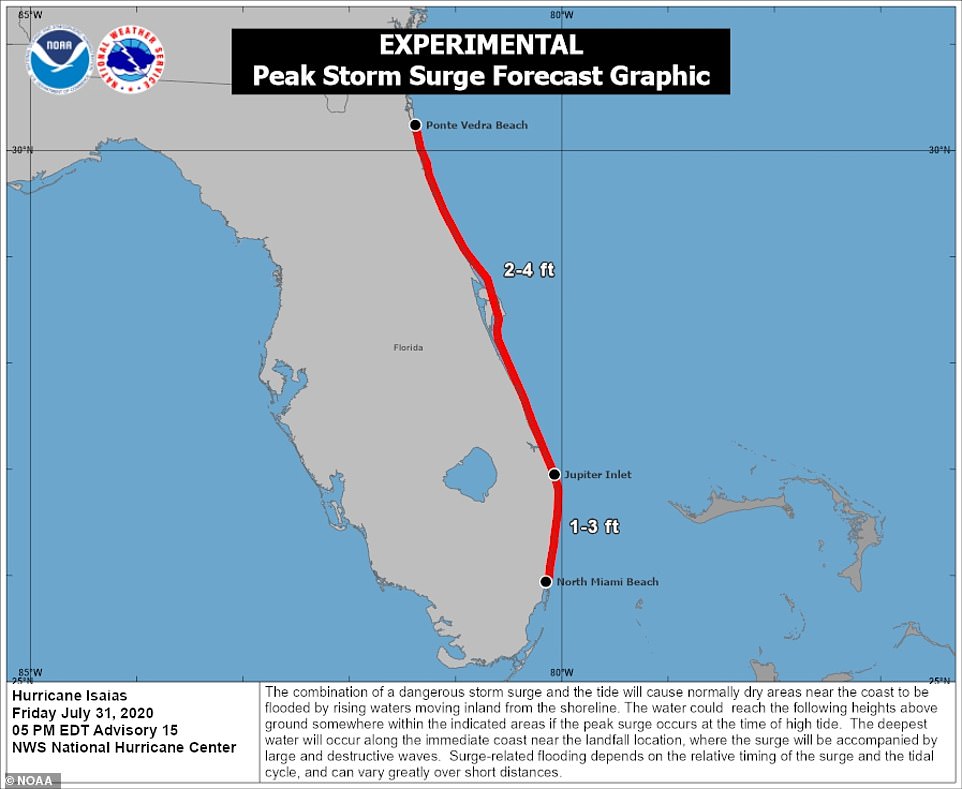 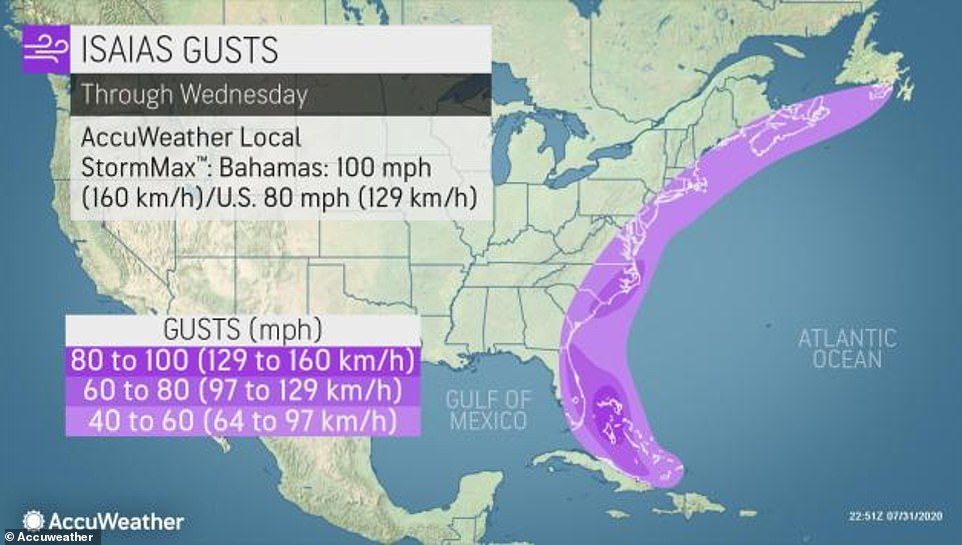 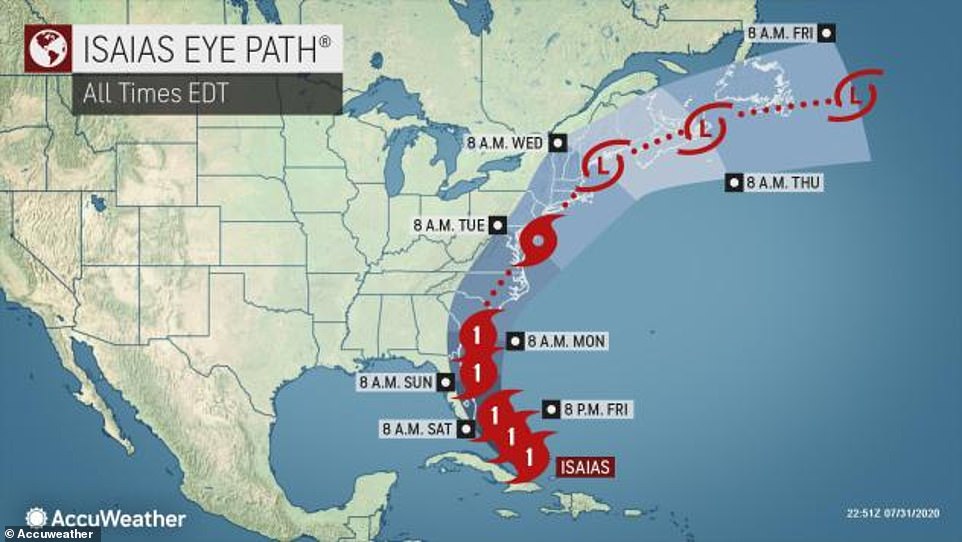 A map showing Florida being in the path of Isaias' eye starting Saturday morning through Sunday, before it potentially travels north to the Carolinas and Virginia 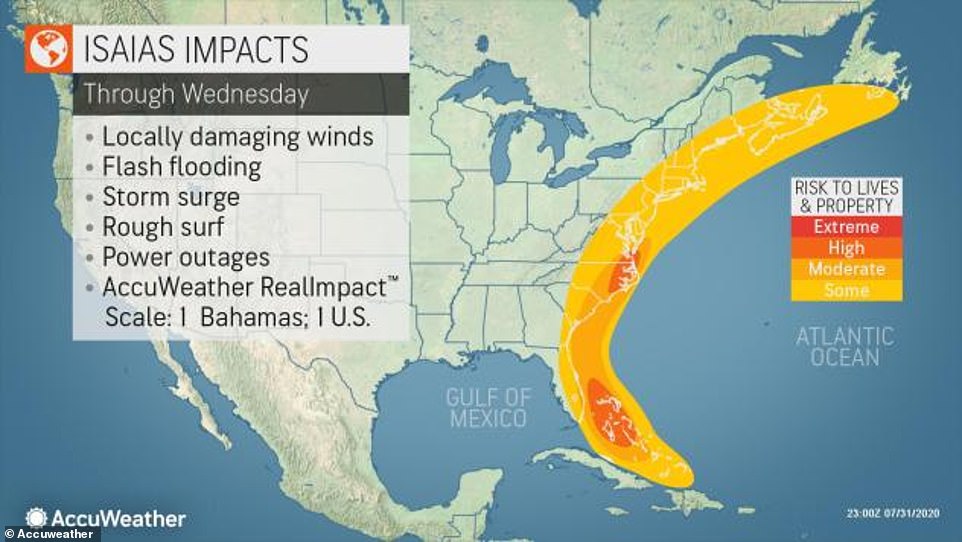 Possible damage and other impact of Isaias along the East Coast includes high to some flash flooding, storm surges, power outages and damaging winds 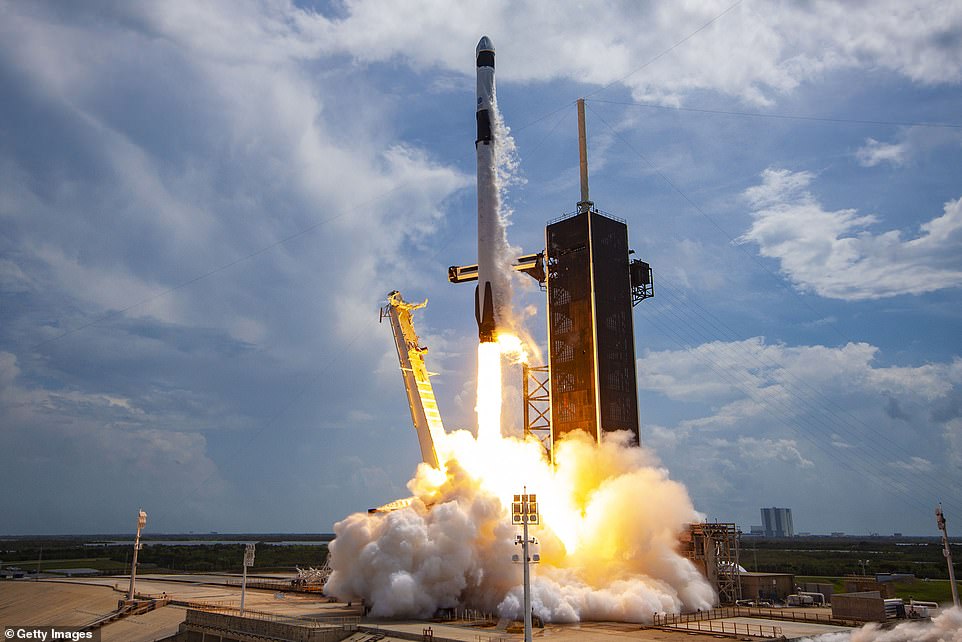 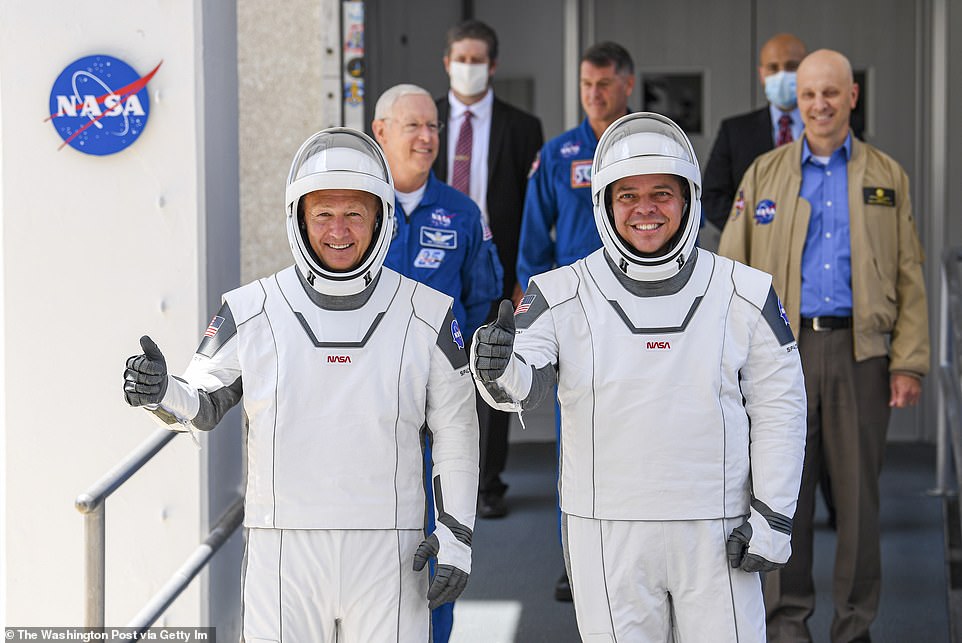 NASA won't decide whether to postpone Behnken and Hurley's splashdown until about six hours prior to undocking.

'We don't control the weather, and we know we can stay up here longer -- there's more chow, and I know the space station program has more work that we can do,' Behnken told reporters in a press call.

The potential splashdown sites are in the Gulf of Mexico and along Florida's Atlantic coast.

On Friday, Florida Gov. Ron DeSantis declared a state of emergency for all of the state's 19 counties along the Atlantic coast, while shuttering all beaches, marinas and parks in those areas.

DeSantis said during a news conference Friday that Isaias was expected to hit Florida 'as early as late tonight into tomorrow morning, with the potential to increase in strength to Category 2 [hurricane],' Fox News reported.

Miami Mayor Carlos Giménez said Friday that 20 evacuation centers were on standby that could be set up with COVID-19 safety measures, although

PREV Coronavirus updates: US reports over 67,000 new cases as total tops 4.5 million
NEXT Cornish locals say they are 'too scared' to go food shopping as visitors ignore ...