Mystery as bizarre 15ft creature with 'flippers' and 'fur' washes up on beach in Merseyside An unidentifiable creature washed up on a beach in Liverpool on Wednesday The 15-foot long headless beast is furry, has flippers and is badly decomposed Locals have speculated that it is a woolly mammoth, a walrus - even an alien

A 15-feet long seabeast that's been compared to a washed-up mammoth and an alien has left locals mystified after turning up on a British beach.

The creature was spotted on the Merseyside beach in Liverpool on Wednesday and has been dubbed the Ainsdale Anomaly.

People have been unable to identify the animal which has no identifiable head but is furry, has flippers and is badly decomposed and covered in flies.

'It's very bizarre,' said one man. 'It's like a mishmash of different things in one. 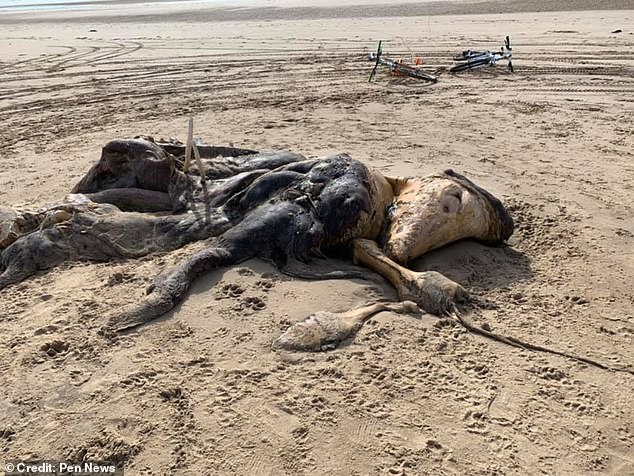 An unidentifiable creature was spotted washed up on a Merseyside beach in Liverpool on Wednesday. It is badly decomposed, covered in flies and very smelly

'It's 15-feet long, it has flippers, it's furry and it seems to have another creature attached, possibly via an umbilical cord, so it could have been giving birth.

The man, who asked to remain anonymous, shared photos of the seabeast with the Ainsdale community Facebook page.

And while plenty of people had suggestions, nobody could identify it for sure.

PREV Revellers enjoy impromptu party on Bondi Beach as Sydney tries to avoid ...
NEXT James Murdoch steps down from the board of News Corp over 'disagreements over ...