Britons are making the most of a 50 per cent discount on meals and soft drinks after a new scheme launched at more than half of UK restaurants, cafes and pubs today.

More than 90 chains including McDonald's, Nando's, Pizza Express and Costa Coffee are among the 72,000 venues taking part in Eat Out to Help Out.

Thousands of independent venues including at least 40 Michelin starred restaurants have also registered with the scheme, backed by £500million of taxpayers' cash.

Diners who eat out on Mondays, Tuesdays and Wednesdays during August will have half of their bill covered by the government, up to £10 per head.

And some were already enjoying the scheme this morning, with BBC presenter Jeremy Buxton tweeting: 'Loving the UK government Eat Out To Help Out offer - family breakfast at Manchester Airport was half price! Thanks Rishi Sunak.'

He bought two paninis, one ciabatta roll, two coffees, one tea, one milkshake, two pain au chocolate and a packet of crisps for £13.67, reduced from £27.40.

Natalie Woodhouse from Doncaster added: 'I'm going out for breakfast to Costa with my best friend Jayne - half price, you can't refuse, can you?'

And a third Twitter user said: 'Yay, it's gonna be so cheap. McDonald's for breakfast menu, TGI for lunch then Nando's for dinner. What's great is I can basically go through the menus at all the places I like for like 50 per cent the cost!'

To use the postcode checker which reveals participating restaurants in the Eat Out to Help Out scheme within two miles of where you live, click here 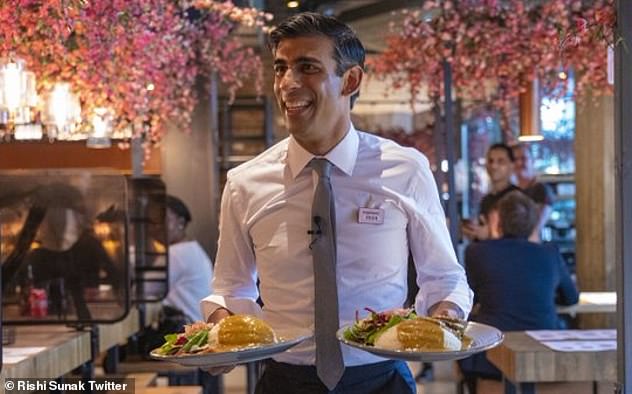 Chancellor Rishi Sunak, pictured at a Wagamama branch on July 8, has launched the scheme 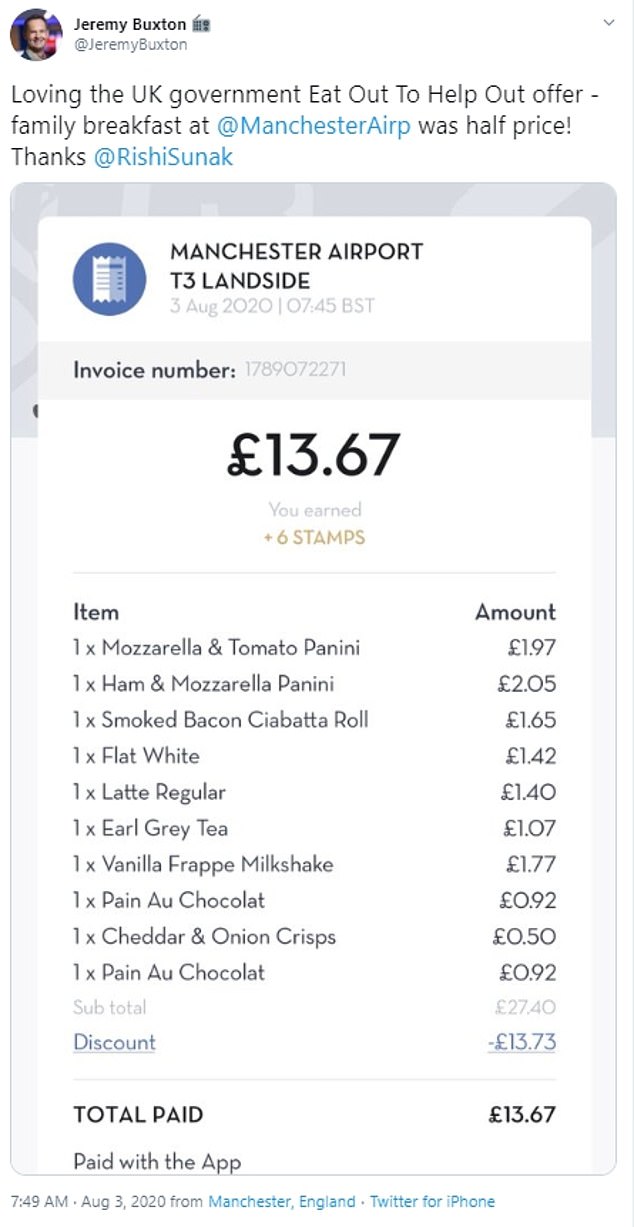 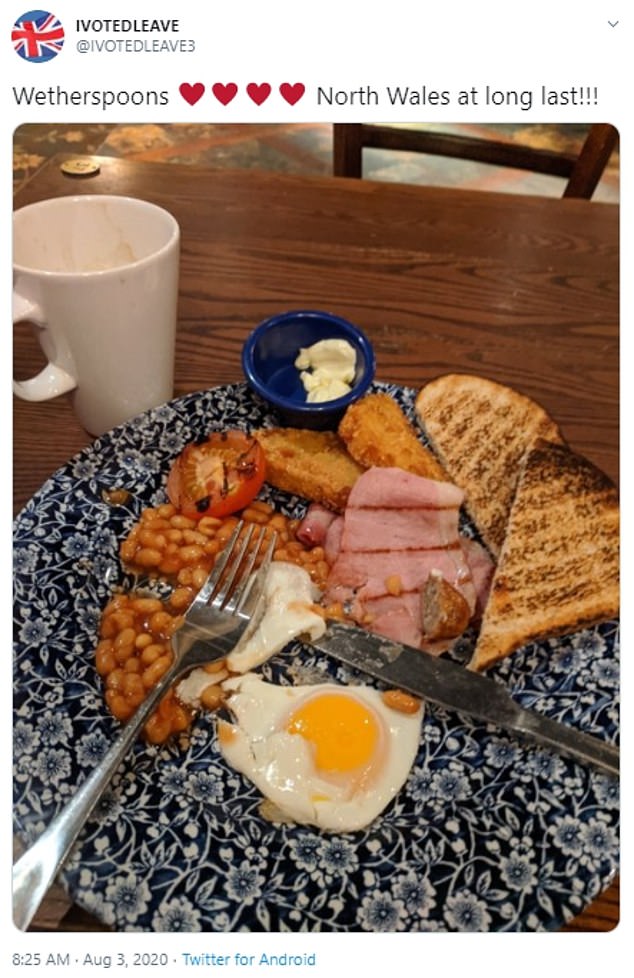 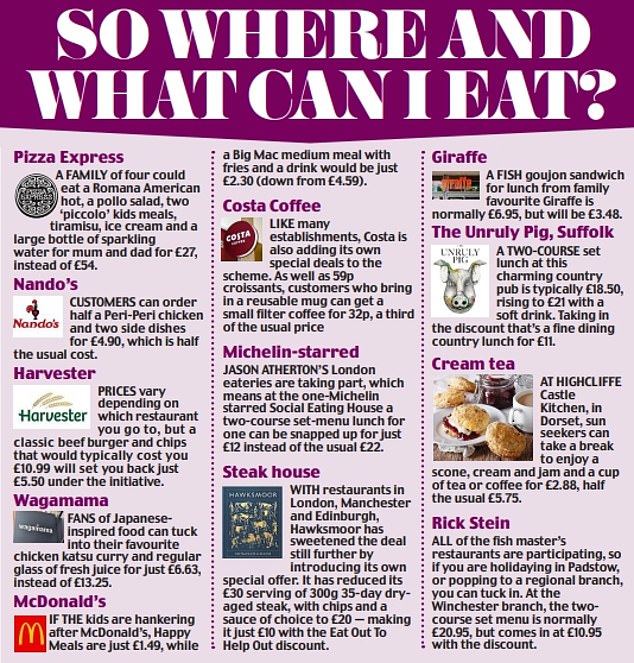 Chancellor Rishi Sunak announced the scheme that is designed to boost the hospitality industry in his summer economic update last month.

The discount means that a £50 restaurant bill for a family of four would be reduced to £25. A couple spending £60 would only have to pay £40.

Q&A: When is Eat Out to Help Out on and do I need a voucher?

When is it available?

It runs every Monday, Tuesday and Wednesday from August 3 to 31.

A 50 per cent discount when you eat in up to a maximum saving of £10 per diner. The business reclaims the value of the saving from government.

What establishments can take part?

What are the restrictions?

No discount on alcoholic drinks or service charges.

Do I need a voucher?

No. The discount will be automatically applied by the participating outlet. The saving can be used alongside other offers and discounts.

How do I find participating outlets?

What about chain restaurants?

Soft drinks and food will be included in the deal although alcohol will not. Meals must be consumed on the premises so takeaways will be not discounted.

There has been some criticism that the government is providing a taxpayer-funded subsidy for fast food at the same time as urging the nation to lose weight.

The move is designed to increase confidence among the public and encourage people to visit restaurateurs, many of whom were badly hit by the coronavirus pandemic, particularly during the lockdown months when much of their business was put on hold.

But critics have aimed fire at the interventionist plan and said fast-food outlets serving unhealthy products should have been banned from participating due to fears the subsidised costs could fuel obesity.

It also attracted controversy once it emerged that Mr Sunak had to make a ministerial order to enact the policy after HM Revenue and Customs chief executive Jim Harra said there was 'uncertainty surrounding the value for money of this proposal'.

Around 80 per cent of hospitality firms stopped trading in April, with 1.4 million workers furloughed - the highest of any sector - according to Government data.

Many of the outlets that have reopened have been forced to operate with fewer covers to comply with social distancing rules, while also having in some cases to introduce screens and one-way systems as part of efforts to make their premises Covid-secure.

Saturday Kitchen regular and Michelin-starred chef Jason Atherton said: 'I hope it will encourage people to enjoy high end dining, in a relaxed and affordable way. Instead of enjoying a select number of places, you can afford to indulge in a number more while supporting the restaurants and kitchens who have been dormant the past few months.

'It means I and my chefs are back in the kitchen doing exactly what we love and we hope it helps kick start the economy.'

In Suffolk, Unruly Pig owner Brendan Padfield says: 'I've certainly noticed a significant increase in calls as a result of the scheme. As my daughter calls him Dishy Rishi, well, Dishy is my hero!'

And Piers Baker, owner of the Sun Inn, in Dedham, Suffolk, has joined the scheme, but remains uncertain about the benefits for his business. 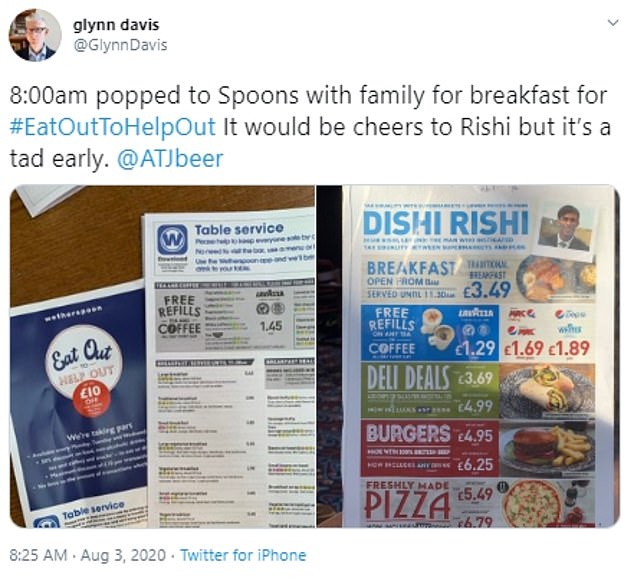 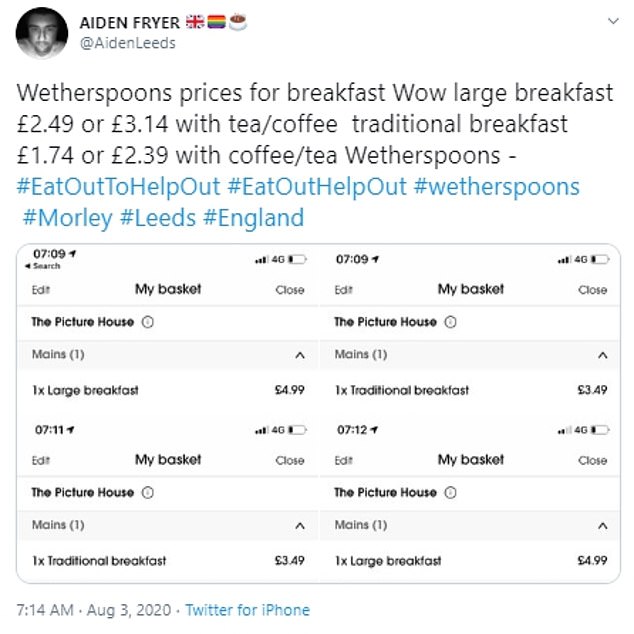 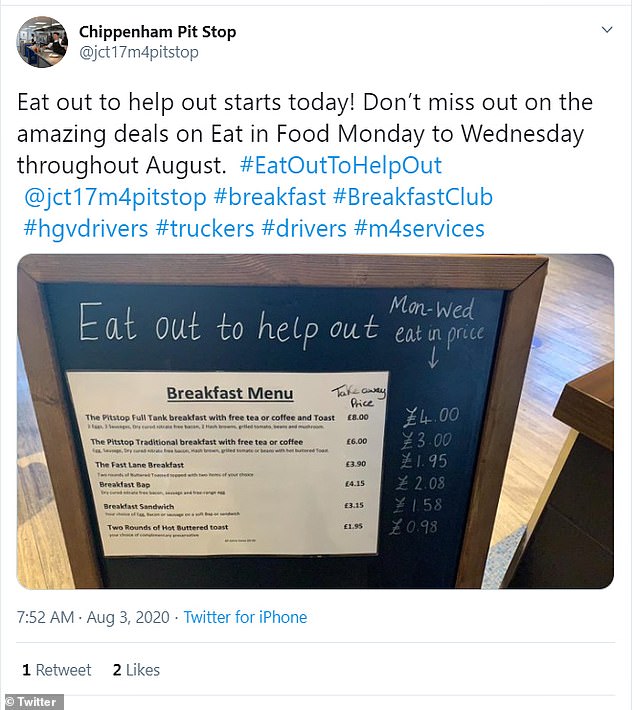 He said: 'It will probably benefit large chain restaurants, but I can't see it working for us, though I acknowledge that it's a good creative measure.'

He added: 'This is a huge support from Rushi Sunak, the Chancellor, and this Government. So, I'm looking forward to going out and using the Eat Out to Help Out scheme to make sure me and my family enjoy a nice meal over those few days.'

Asked if he will be having a half price meal, Mr Zahawi said: 'I'll be going out and helping those restaurants in Stratford-on-Avon, in London, wherever I can, of course. I think it's the right thing to do.'

And asked if you could choose to pay full price, he replied: 'It's worth all of us going out and if the Government is supporting the sector, why not? We should all absolutely make sure that we go out and enjoy that restaurant.'

Mr Zahawi pointed out that it is capped at £10 per person. He also told Sky News: 'I've got a family of five. We're going to go out and grab something nice, hopefully after work this evening.'

Asked about how the scheme sits alongside the Government's new obesity crackdown, Mr Zahawi said: 'I think the two things aren't contradictory at all. Restaurants are still being asked to think about the food they serve, how healthy it is...'

He said he is of heavier build and has tried to be careful what he eats during lockdown, and has been looking at the calories in his food.

'I think that's a good thing and I think restaurants will step up and do the right thing also by following the rules because we all need to get healthier,' he said.

Mr Sunak said last night: 'Our Eat Out to Help Out scheme's number one aim is to help protect the jobs of 1.8 million chefs, waiters and restaurateurs by boosting demand and getting customers through the door. 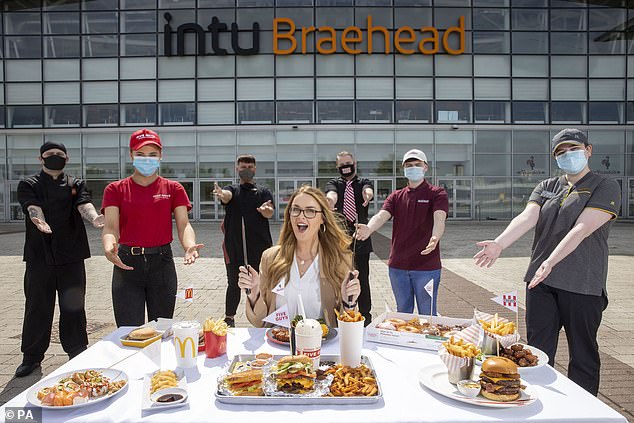 Madison Dock (centre) from Johnstone, Renfrewshire, sits outside intu Braehead in Glasgow where diners will be able to enjoy half-price meals, at participating restaurants from today

'More than 72,000 establishments will be serving discounted meals across the country, with the government paying half the bill.

'The industry is a vital ingredient to our economy and it's been hit hard by coronavirus, so enjoy summer safely by showing your favourite places your support - we'll pay half.'

** Are you going out for a half-price breakfast this morning? Please email your photos with your location and name to: [email protected] **

No vouchers are required for those booking tables, with the participating establishment deducting 50 per cent from the bill and charging the discount to the Treasury.

Officials said there had been more than 3.3 million hits on the Eat Out to Help Out restaurant finder website since it started up last week, giving an indication of the demand for the month-long saver scheme.

But Munira Wilson MP, the Liberal Democrat health spokeswoman, said the Chancellor should have prevented diners from using the discount to buy junk food.

The start of the scheme comes only a week after Prime Minister Boris Johnson unveiled the Government's obesity crackdown.

'We all recognise the need to support the high street through the pandemic, but the Government should have been more discerning with this scheme,' said Ms Wilson.

'Obesity is already an immense challenge for people and the NHS, but the latest research suggests it also contributes to the deadliness of coronavirus.

'With a number of fast-food chains signing up to the scheme, it seems clear that public health did not factor into the Government's decision. 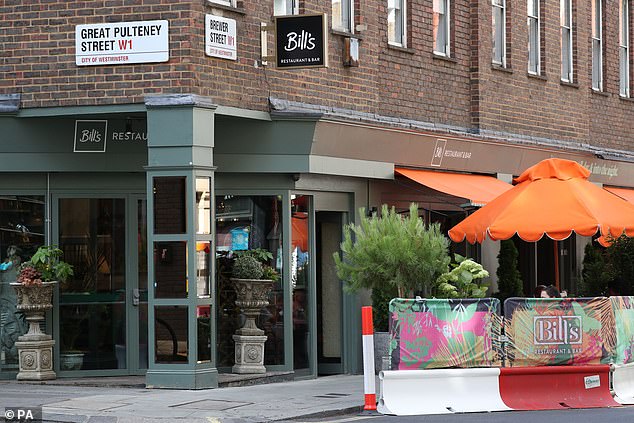 Bill's Restaurant and Bar in Soho, London, which is also involved in the scheme