Big smack and fries: Burger King customer, 21, hits worker after accusing colleague of 'making his nuggets too spicy' A Burger King customer was caught on camera slapping an employee after it was alleged his nuggets were made 'extra spicy'  The assault happened in a branch of the fast food chain in Pittsburgh The customer allegedly threatened another employee before slapping a second worker and then walking out   Austin Addison, 21, has been charged with harassment, disorderly conduct and criminal mischief

A man has been charged after being caught on camera violently slapping a Burger King employee after a row over chicken nuggets being made 'extra spicy'.

The assault was captured on camera in June at a branch of the fast food chain in Pittsburgh.

In the short 16-second clip, the customer can be seen threatening one employee while talking to another. 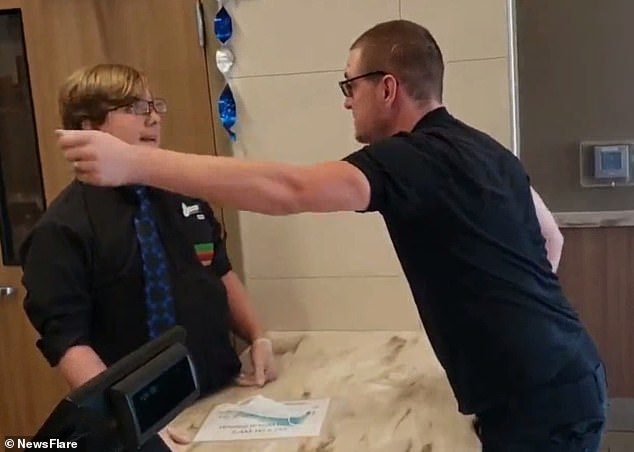 The video starts mid-conversation with the man yelling at a female worker out of shot: 'Can't f****** count but for robbery and stealing stuff.

'She needs to get the f*** out of here before I get her put in jail for the rest of her life!'