Homeowners have vented their anger at a vast 60ft high warehouse described as an 'eyesore' and a 'monstrosity' that was allowed to be built behind their homes.

Neighbours on the small cul-de-sac of Tourney Green in Warrington, Cheshire, which is the most affected, fear the construction of the new distribution centre will greatly affect their house prices.

Resident Paul Taylor slammed Warrington Council's decision to approve the construction of the huge building, which will obstruct his street's pleasant views.

He said the construction has 'impacted massively' on the residents' lives and HGVs and construction workers have caused dust and dirt to blow over their properties.

It is not yet known which company will lease the speculative build, but other firms that have snapped up space on the same development include Hermes, Asda, Royal Mail and Amazon. 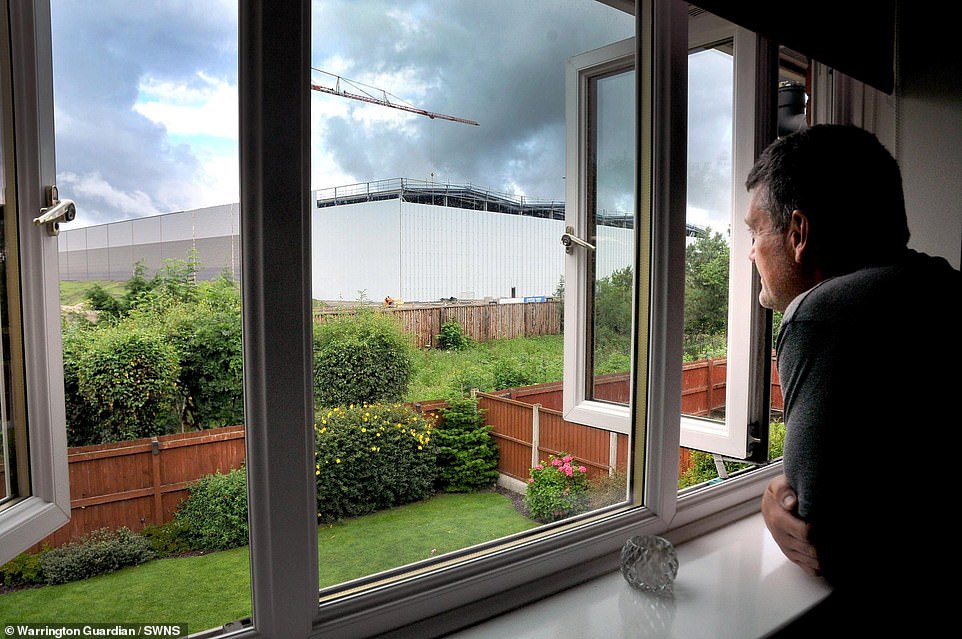 Homeowners have condemned an enormous 60ft high warehouse described as an 'eyesore' and a 'monstrosity' that was allowed to be built behind their homes. Pictured: Resident Paul Taylor's view from his home

People living nearby branded it an 'outrageous planning decision' and are demanding answers from Warrington Borough Council.

Planning documents state the existing two-metre fence around nearby homes would 'help obscure' the warehouse, as would the three-metre trees at the back of the homes.