France's prime minister has told his citizens to 'pull themselves together' amid a fresh surge in coronavirus cases.

Jean Castex said the public was becoming careless and raised the spectre of a second lockdown after a rise of more than 10,000 cases in the last week.

'If we don't act collectively, we expose ourselves to the heightened risk that the rebound in the epidemic becomes hard to control,' Castex said on a visit to an intensive care ward in the South of France.

Some parts of France have tightened their mask rules despite the summer heatwave, while neighbouring Belgium has today made masks compulsory in all public spaces including outdoors.

Fears are growing that France could be added to Britain's quarantine list within days after UK ministers said they would 'not hesitate' to close down travel corridors if cases rise. 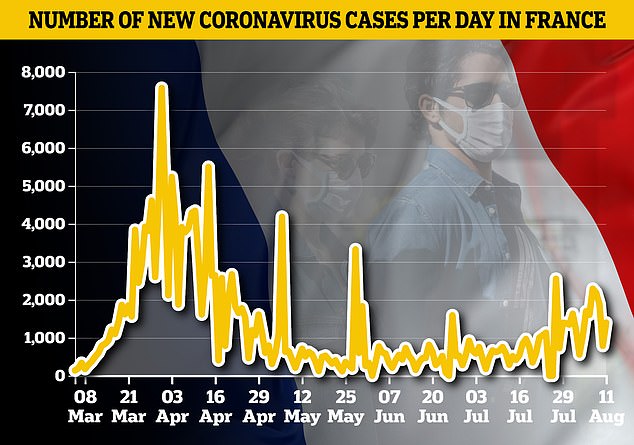 French health officials have reported 10,143 new cases in the last seven days, up from 8,833 in the previous week - making it five straight weeks of increase 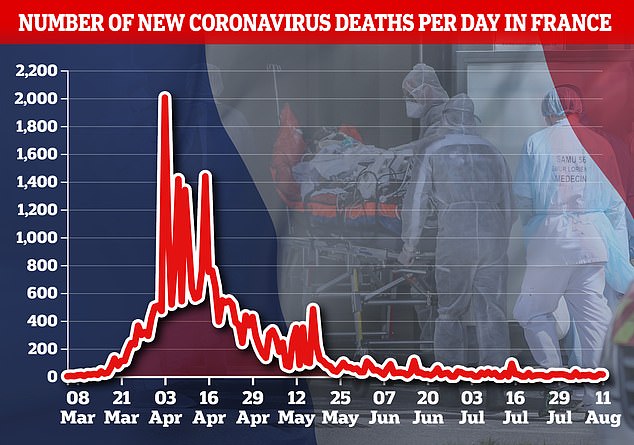 France's daily death toll remains low, with the total now at 30,354 fatalities linked to Covid-19 including 19,849 in hospital

Health officials have reported 10,143 new cases in the last seven days, up from 8,833 in the previous week - making it five straight weeks of increase.

On Monday, France reported the first significant rise in the number of coronavirus patients in hospital since the lockdown was lifted, although it fell again on Tuesday.

Some 227 clusters have been identified across France, a rise of 25 in the last 24 hours, as summer holidays resume and people gradually return to work.

The increase has led to fears that France will be the next country struck off Britain's approved travel list, as Spain and Belgium have already been.

Prime Minister Boris Johnson said on Monday that Britain will 'not hesitate' to re-impose the quarantine requirement for more countries if needed, after previously doing so for Spain and Belgium among others.

Castex said the situation had been going the 'wrong way' for two weeks and called on French people to 'pull themselves together', French media said.

The PM said testing was 'more than satisfactory', with more than 600,000 tests being conducted weekly, but said more could still be done to target those with symptoms.

Talking of the risk of another lockdown, Castex said: 'Nobody wants to live through that again.'

Castex said he would ask local authorities 'to extend as far as possible the obligation to wear masks in public spaces'.

Some cities including Paris, Lille, Toulouse and Biarritz have already imposed a mandatory face mask order in crowded outdoor spaces despite the hot weather.

Masks are already compulsory in shops and banks across France.

Today the government said it will ramp up police checks to ensure people wear masks, saying France is 'at a tipping point'.

'We're going to mobilize polices forces to make checks,' spokesman Gabriel Attal told reporters. 'But it's not the police people should be afraid of... they should fear the virus, that lurks and contaminates.' 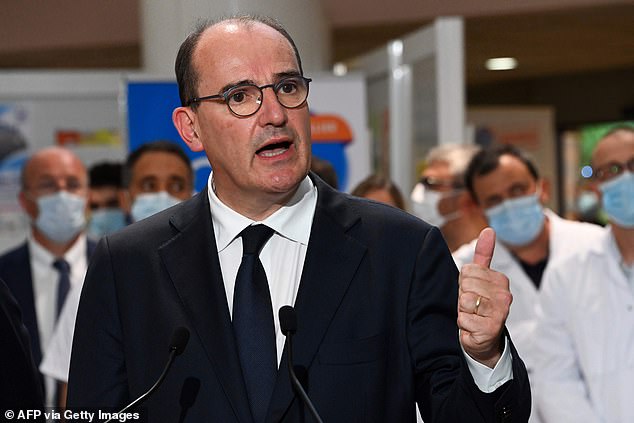 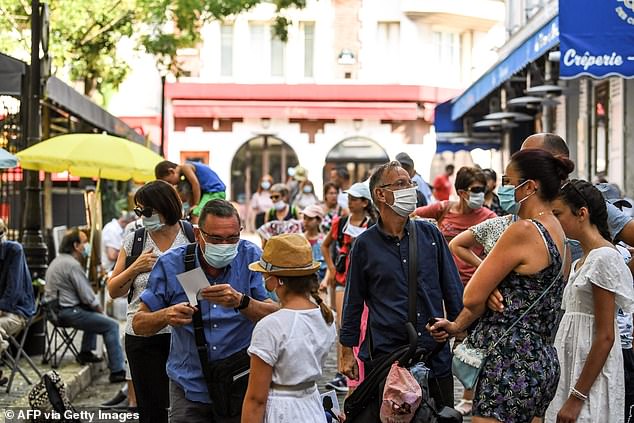 Ministers resolved to draw up new restrictions for the 20 largest cities to curb the infection rate and extend a ban on gatherings of 5,000 or more until October 31.

France's daily death toll remains low, with the total now at 30,354 fatalities linked to Covid-19 including 19,849 in hospital.

Meanwhile in Belgium, masks are now compulsory in public places in Brussels as the country battles its own worrying virus outbreak.

The new measure has been imposed in all 19 municipalities of the Brussels region after the threshold of 50 daily cases per 100,000 people was