UK government-funded projects in Scotland will be stamped with the Union flag to show who paid for it after Brexit.

Boris Johnson wants the emblem to be included in the same way that European Union flags were included on infrastructure and other schemes paid for in whole or part via Brussels' cash.

The move, due to to come into effect after the transition period ends on December, comes as the Prime Minister battles strong support for independence in Scotland as well as his own dire personal ratings.

Opinion polls show the SNP under Nicola Sturgeon is on course for another sweeping victory in the 2020 Scottish Parliament elections.

Douglas Ross, the new Scottish Tory leader, told the Daily Telegraph: 'We should be unashamed of our direct investment in communities across Scotland. We will see that through the shared prosperity fund, that is the money that the EU used to earmark for projects in Scotland and other parts of the UK.

'If they could have an EU flag on it - why not have the United Kingdom flag on it to show that here is an example of our two governments in Scotland, working together and the UK government delivering for individual communities and projects the length and breadth of the country?' 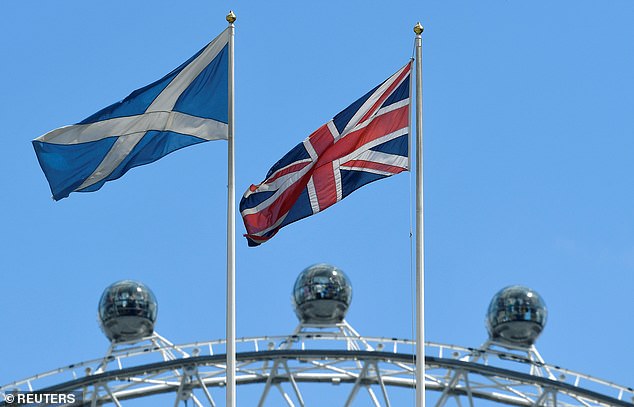