Is this Wales's dumbest dog? Spaniel chases a flock of seagulls half a MILE out to sea and has to be rescued by lifeboat A spaniel was rescued from off the Welsh coast by the RNLI on Monday morning The dog swam out to sea after chasing a flock of seagulls on a beach in Rhyl Owner told to stay on the beach while the Rhyl coastguard launched a lifeboat

A spaniel has been rescued by a lifeboat after chasing a flock of seagulls half a mile out to sea.

The dog ran away from its owner and into the sea off the coast of Rhyl, Wales, just before 9am on Monday morning.

Rhyl coastguard launched a lifeboat 11 minutes after the call was made and filmed the moment it picked the tired pup out of the water.

The dog was found off the new SC2 waterpark site to the west of the town, reported North Wales Live.

Its owner was told to stay on the beach and not attempt to rescue his stricken dog. 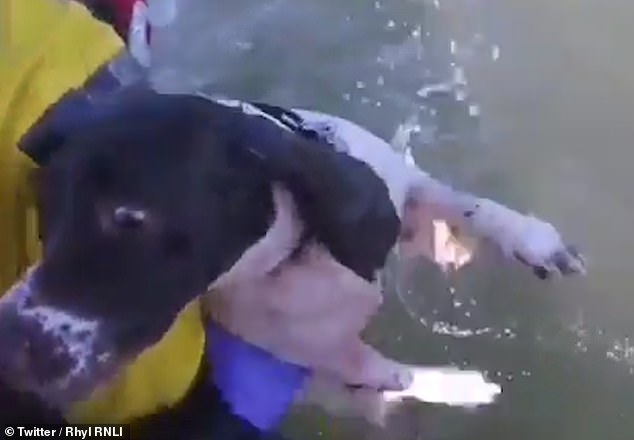