Volley of missiles tears through a decommissioned US Navy ship during Pacific training exercise amid escalating tensions with China US Navy led 10 nations in Rim of the Pacific training exercise in seas near Hawaii  Two weeks of drills culminated with the sinking of a decommissioned cargo ship  Video showed USS Durham being torn apart by a volley of missiles and gunfire 22 ships, a submarine, and 5,300 personnel took part in the scaled-down drills

Dramatic video captured the moment a decommissioned ship was torn apart by a volley of missiles and shells at the culmination of a two-week naval drill.

The USS Durham, a cargo vessel which was taken out of in 1994, was hit by a US-made Harpoon and Hellfire missiles, French Exocet missiles, and five-inch shells fired from American, Australian, Canadian, and Bruneian ships.

The sinking marks the end of the biennial Rim of the Pacific naval training exercise - which is typically the largest anywhere in the world, but was scaled back this year due to coronavirus. 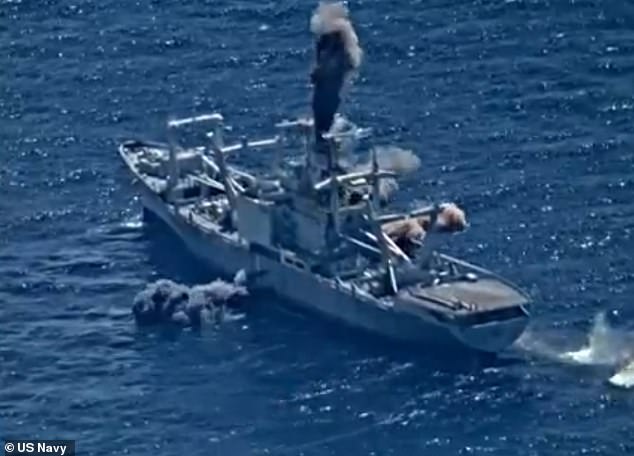 Even so, the two-week drill involved 22 ships, one submarine and 5,300 personnel from ten different countries, led by the US Navy.

The exercise took place in the waters off Hawaii, and involved combat maneuvers and live-fire drills.

All land-based exercises were called off, and ship-boarding drills were also abandoned to