Haunting audio has emerged of AFL legend Danny Frawley speaking about what may have sparked the chronic condition he was diagnosed with after his death.

It's been almost a year since the AFL was rocked by the death of the St Kilda great turned media personality when his car slammed into a tree near Ballarat, Victoria, one day after his 56th birthday in September, 2019.

His grieving widow Anita revealed this week her husband of 30 years suffered from a neurodegenerative disease linked to head injuries at the time of his death. 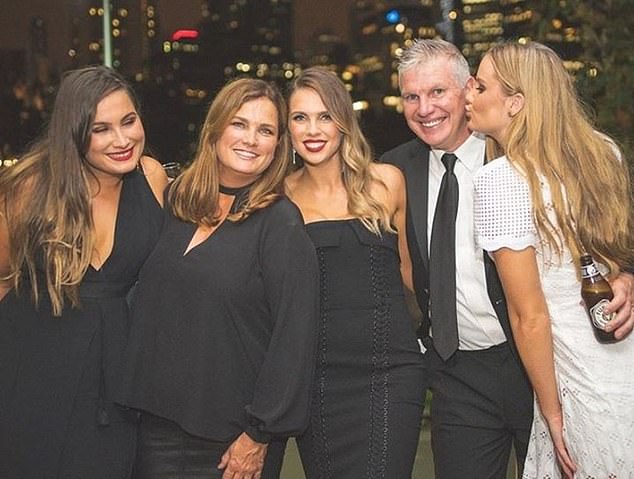 The condition, which can cause depression and suicidal thoughts, can only be detected after death and is linked to repeated head knocks and concussions.

Regraded as one of the toughest players of his era, Frawley suffered countless big hits during his long 240-game career with the Saints.

At least one heavy knock to the ground landed Frawley in hospital.

Vision of some of the hardest hits was aired on

It’s been almost a year since football’s lovable son, Danny Frawley, died when the car he was driving struck a tree.

Today his widow has revealed he was suffering from the degenerative brain condition CTE. pic.twitter.com/0u6LVoFXFg

on Tuesday night, along with old audio of Frawley speaking about how he would respond after the on-field knocks.

'Look, the '80s and '90s, it was a sign of weakness if you went off the ground, it was as simple as that,' Frawley recalled. 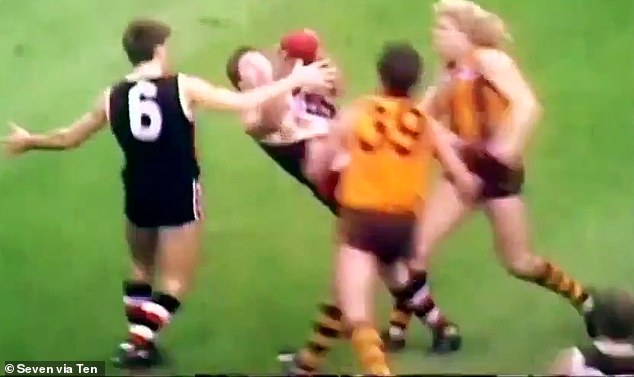 Frawley is the second former AFL player to be diagnosed after legendary ruckman Graham 'Polly' Farmer was confirmed to have Stage III CTE in February.

The Geelong Cats great was 84 years old when he died in August last year after battling Alzheimer's.

Other former AFL players now fear they also the disease, including Sean Smith.

The former Melbourne Demon is one of dozens of players involved in a class action against the AFL for head injuries they sustained during their careers.

'The biggest effect is the change in the moods,' Smith told The Project.

'I get a little bit angry, just generally not myself.  It has affected my life quite dramatically.' 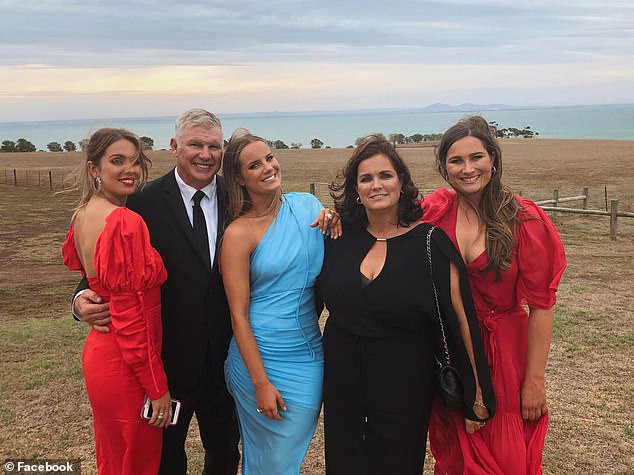 Frawley (second from the left with his family), AFL great turned media personality, died after his car slammed into a tree near Ballarat, Victoria, just one day after his 56th birthday on September 9, 2019 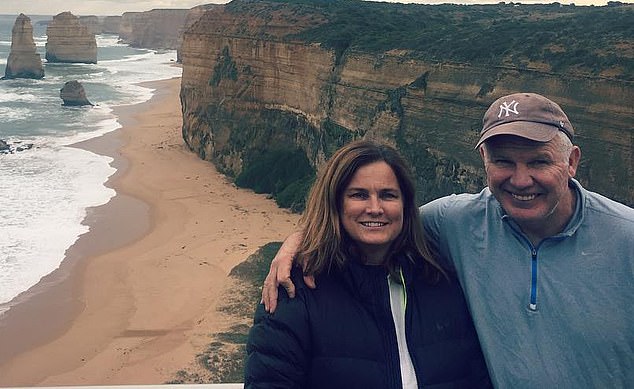 Frawleys wife, Anita (left), confirmed an analysis of her husband's brain - which has been handed to the Victorian Coroner - found he had Stage II chronic traumatic encephalopathy (CTE) 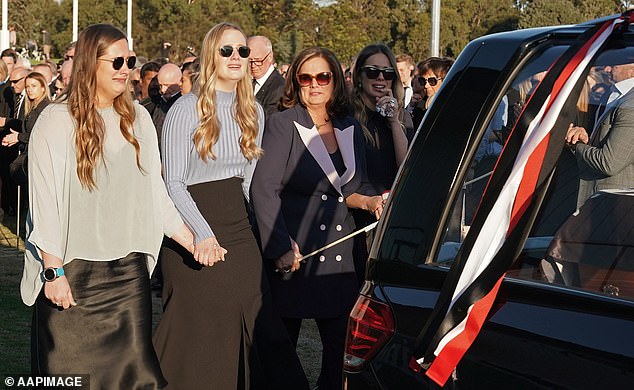 Daughters Chelsea, Keeley, Danielle Frawley and wife Anita Frawley follow the coffin of Danny Frawley at his funeral in September 2019

The father-of-three had been vocal about his battle with depression in the lead up to his death and his loved ones had noticed a change in his behaviour.

His widow hopes the diagnosis will 'prevent other families from going through what we did'.

'This is an issue for the community, it is not about a particular sport or sports, we need more research to diagnose and assist people living with the disease,' Anita told the Herald Sun.

Anita said her late husband's mental health battles and advocacy for the issue was well known.

'As his wife for over 30 years, I strongly suspected there was more going on with Danny than straightforward depression,' she said.

Anita said she is grateful for the Australian Sports Brain Bank, which is shining a light on the disease.

She hopes a greater understanding of CTE will prevent other families from suffering in the same way. 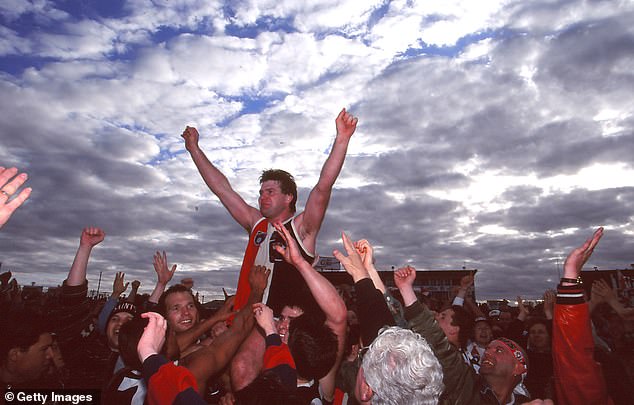 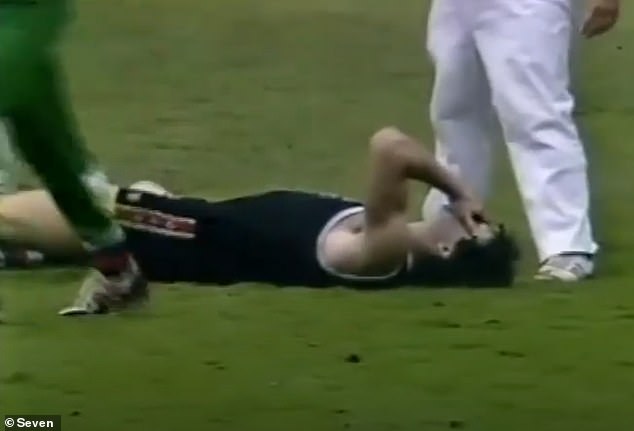 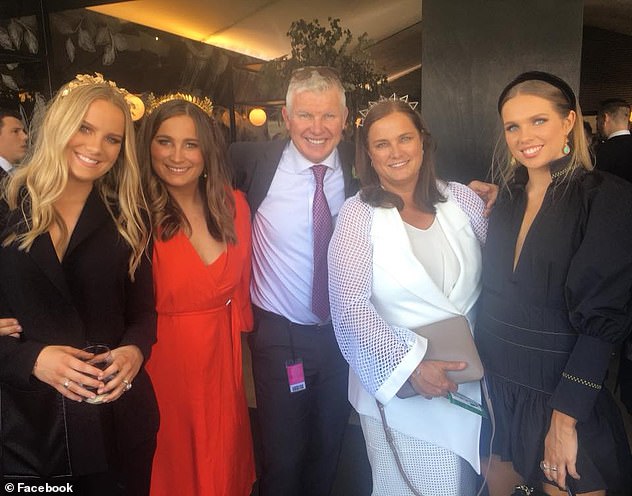 Anita (second from right right) hopes the CTE diagnosis will 'prevent other families from going through what we did'. Frawley (centre) is pictured with his family

Mrs Frawley has been in contact with the AFL since her late husband's diagnosis.

The code since vowed to work with the Brain Bank and other researchers to better understand CTE and its impact.

'Danny's death last year had a profound impact on our industry. Everyone who knew Danny loved Danny' chief executive Gil McLachlan said in a statement on Tuesday.

'Danny's family ensured that his passing served as a message to many people – men in particular - on the importance of listening and learning to each other and ensuring that our friends and families are coping.

'In the same way his family – like the family of Graham 'Polly' Farmer – have again provided us the opportunity to continue to learn from Danny.

'In our discussions Anita has been really clear that she wants the learnings from Danny's death to continue to provide a benefit to sport and we will continue to work with Anita and the family and researchers to learn as much as we can and to continue to make whatever changes are necessary to keep the people who play our game safe'.

What is chronic traumatic encephalopathy (CTE)?