New lockdown rules will be enforced in Glasgow from midnight tonight following a spike in coronavirus cases, Nicola Sturgeon has announced.

Under the new rules - which also apply to West Dunbartonshire and East Renfrewshire - residents are no longer allowed to meet up with other households indoors.

Only essential hospital visits are allowed in the affected areas and anyone visiting a loved one in a care home must do so outside.

The guidelines will be reviewed after a week but they are set to remain in place for 14 days in total.

Announcing the restrictions, Ms Sturgeon wrote on Twitter: 'I know how difficult this will be - I am a Glasgow resident so these rules apply to me too - but they are essential to, I hope, nip this in bud and avoid tougher restrictions.'

The additional regulations in the three areas come after Aberdeen saw itself thrust into lockdown again on August 5.

The city's population of more than 200,000 were banned from travelling more than five miles from their homes - but this restriction has since been lifted.

Aberdeen's restaurants, pubs and bars are able to reopen subject to assurance checks. 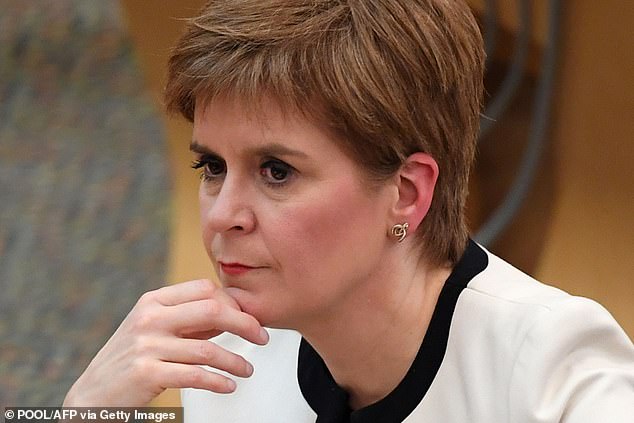 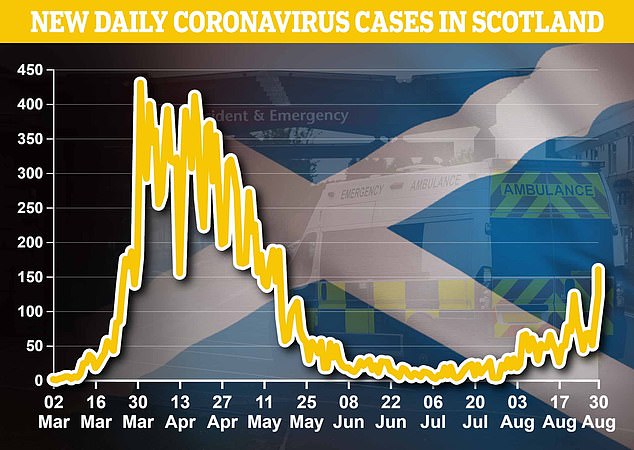 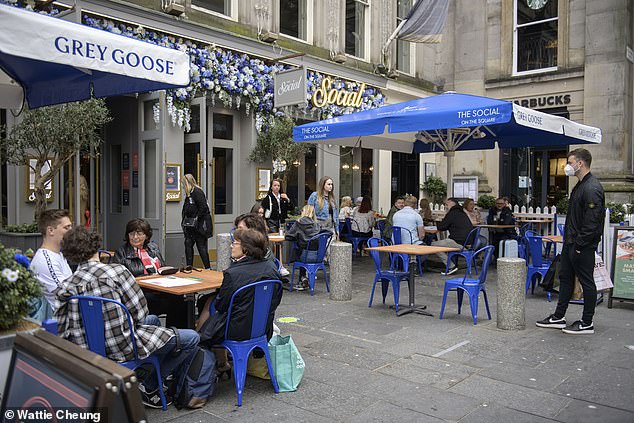 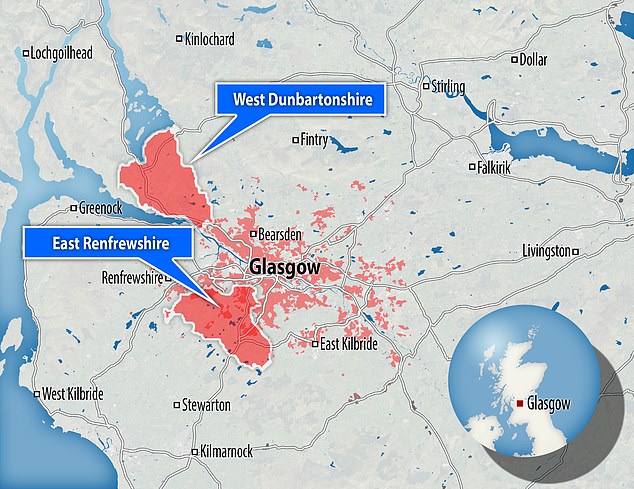 What are the new lockdown rules imposed in West Dunbartonshire, East Renfrewshire and Glasgow
No meeting people from other households indoors Members of different households - who are not in a bubble - should only meet outdoors or in hospitality settings with social distancing If anyone is a close contact of someone who has tested positive, they should isolate for 14 days Only essential visits to hospitals and care homes Outdoor visits to care homes are allowed. There should only be three people at a time and the visit cannot last longer than two hours

A further 154 people were diagnosed with coronavirus in Scotland today. There were no deaths reported north of the border.

The NHS regional board of Greater Glasgow and Clyde reported 66 cases of coronavirus in 24 hours - 43 per cent of Scotland's case total on Tuesday.

Ms Sturgeon earlier told BBC News that the numbers were 'causing us some concern' ahead of her meeting with the Scottish government's resilience committee this afternoon.

On Monday, 69 cases were reported in Greater Glasgow and Clyde alone - up from just 39 one day prior.

In other coronavirus developments today;

Scotland adds Greece to its mandatory quarantine list; Millions of pupils in England are returning to school for the first time since March, as two new studies reveal children are six times less likely to spread the coronavirus than adults, and are more likely to die in an accident than of Covid-19; Most people who have been added to the free flu jab programme won't get their jab until December despite the Government drive to widen the scheme to take the pressure of the NHS this winter; The World Health Organisation Europe director has warned schools reopening and flu season could mean a surge in Covid-19 patients will pile pressure back on hospitals this winter; Boris Johnson today warned there is going to be 'more of this wretched Covid still to come' as he convened his Cabinet and told ministers 'bit by bit' the UK is 'getting back on its feet';  AstraZeneca begins final trials of Oxford University coronavirus vaccine enrolling 50,000 people worldwide and 30,000 in the US as company signs £15million manufacturing deal. 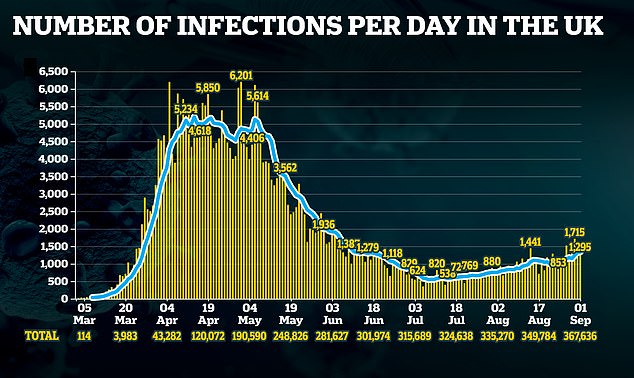 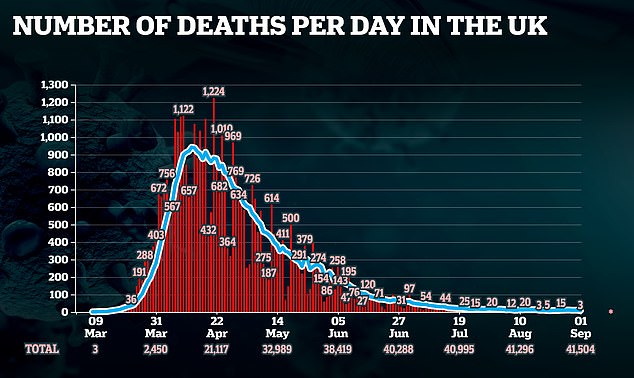 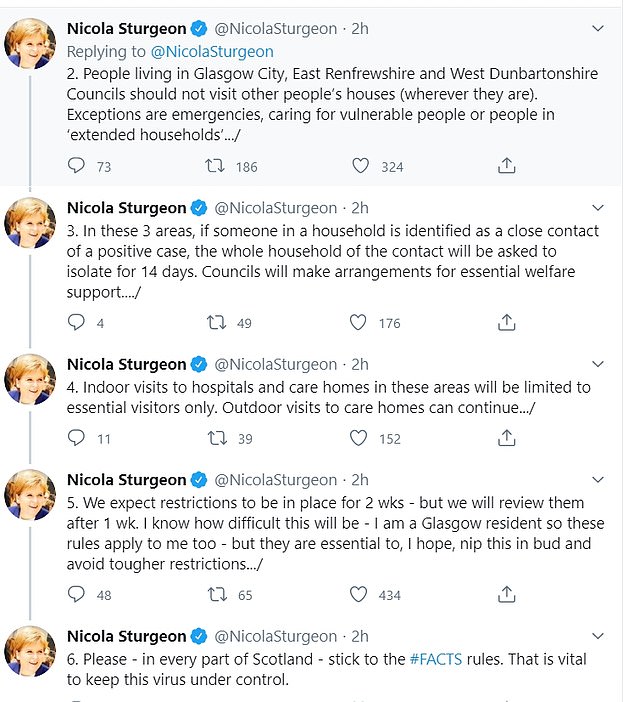 Announcing the restrictions, Ms Sturgeon wrote on Twitter: 'I know how difficult this will be - I am a Glasgow resident so these rules apply to me too - but they are essential to, I hope, nip this in bud and avoid tougher restrictions'

Scotland has added Greece to its mandatory quarantine list - in another move signalling firm action from Ms Sturgeon's government.

Travellers from Greece will be required to self-isolate at home for 14 days on arrival in Scotland from Thursday.

It comes after a significant rise in cases of coronavirus being imported from the Mediterranean country, the Scottish Government said.

The measures will come into effect at 4am on Thursday.

Travellers from Greece will be required to self-isolate at home for 14 days on arrival in Scotland from Thursday.

It comes after a significant rise in cases of coronavirus being imported from the Mediterranean country, the Scottish Government said.

The measures will come into effect at 4am on Thursday.

Scottish Justice Secretary Humza Yousaf said: 'We are in the midst of a global pandemic and the situation in many countries can change suddenly. Therefore, people should think very hard before committing to non-essential travel abroad.

'With Scotland's relatively low infection rate, importation of new cases from Greece is a significant risk to public health.

'We continue to closely monitor the situation in all parts of the world and base the decisions we make on the scientific evidence available.

'Regular discussions continue with the other three governments in the UK.

'Requiring travellers arriving from a non-exempt country to quarantine for 14 days on arrival is vital to helping prevent transmission of the virus and to suppress it.'

The Scottish Government said evidence of virus importation, especially from the Greek islands, has led to the country being removed from the exemption list on public health grounds.

It is believed prevalence of Covid-19 in Greece remains lower than 20 per 100,000, but a number of cases in Scotland can be traced back to travel to the Mediterranean country.

Countries tend to be added to the quarantine list when the figure rises above 20 per 100,000.

Scotland's chief medical officer Gregor Smith said: 'There is a compelling public health risk around importation of the virus, especially given the number of imported cases linked to the Greek islands.

'The flow of travel between Scotland and Greece, and the behaviour we have seen from some of those travellers, means that on public health grounds there is a strong case - supported by public health directors - to remove Greece from the exemption list.'

All international travellers coming into Scotland, apart from a very limited number of individual exemptions, must complete a passenger locator form.

Those who do not complete it and present it when asked on arrival may be fined £60.

This can be doubled for each subsequent offence up to a maximum of £480.

Failure to comply with the requirement to quarantine may result in a fine of £480.

She said numbers were 'undoubtedly a concern' and she feels 'a greater sense of anxiety today' than at any time 'probably for the last couple of months'.

On Monday, 160 new cases of Covid-19 were recorded in Scotland with Ms Sturgeon admitting Scotland is in a 'fragile position' after loosening lockdown rules.

It was the highest daily total of cases since May 16 and a significant increase on the 123 cases which were announced on Sunday.

Even with the spike in cases - Scotland took more steps out of lockdown on Monday, with the opening of gyms and indoor swimming pools and the resumption of youth groups such as Cubs and Brownies and mother and baby groups.

That same day, children in Scotland returned to school in face masks as new rules came into force.

The measures are in place in communal areas and corridors but children won't have to wear face coverings while they are being taught in classrooms.

The rule will also apply on school transport for primary school pupils aged five and above and applies to all those at secondary school.

Announcing the new rules for schools last week, the Scottish Government said while staff and students can continue to wear face coverings if they wish, they will not generally be necessary in the classroom as there is greater scope for physical distancing and face coverings can have an impact on learning and teaching.

But it remains the case that where adults cannot keep a two-metre distance and are interacting face-to-face for more than 15 minutes, face coverings should be worn.

Indoor activities for children are still not allowed in Scotland.

Education Secretary John Swinney said: 'There is increasing evidence that face coverings can provide some protection for the wearer as well as those around them.

'We also know that some pupils have found it very difficult to physically distance when moving around school, which could increase the risk of transmission of the virus.

'And on school transport, as on public transport, there can be mixing between different age groups.'

He added: 'We want to continue to protect what we have achieved in suppressing the virus and re-opening schools, and to do the best for children in schools.'

Mr Swinney has stressed pupils will not be excluded from school if they do not wear a face covering.

The latest statistics bring the total number of cases since the start of the pandemic in Scotland to 20,632.

Meanwhile, a young Scottish woman was today accused of being a coronavirus 'superspreader' after a cluster of 22 cases sprang up in Ayrshire.

The unnamed woman continued to attend parties after holidaying with friends who fell ill with symptoms.

She allegedly went to pubs and 'several parties' before herself testing positive. The cluster of 22 cases has since sprang up in Ayrshire, which medical officials confirmed were linked to house

PREV Anne Sacoolas was on the wrong side of the road for '20 seconds'
NEXT Desperate search for pregnant woman, 33, who vanished a week ago