Britain's roads and railways were still almost empty today as the drive to get workers back to offices following the summer holidays stalled again.

While some London Underground trains were beginning to look busier during rush hour this morning, hardly anyone was to be seen arriving at major terminals in the capital including Waterloo and Paddington.

Commuters travelling into London on train lines such as Great Western Railway and Southeastern also tweeted photographs of near-empty carriages, while pictures of the M40 during rush hour also showed very light traffic.

London transport networks are barely busier than last week, with Tube use yesterday still more than 70 per cent down on this time last year. Buses in the capital are now carrying only half their usual numbers.

However, there were 550 jams across 230 miles of roads in London as of 8am, with congestion levels at 41 per cent, compared to 28 per cent last Wednesday - a rise of 13 percentage points or nearly double the amount.

TomTom data also showed this was up on the same time yesterday at 36 per cent, but still well below last year's average of 67 per cent. Congestion at 7am today was 34 per cent, up from 25 per cent at the same time last week.

It comes as Work and Pensions Secretary Therese Coffey said 'more than half' of staff are 'fully back in the offices' at the Department for Work and Pensions amid a push for civil servants to get back to their desks. 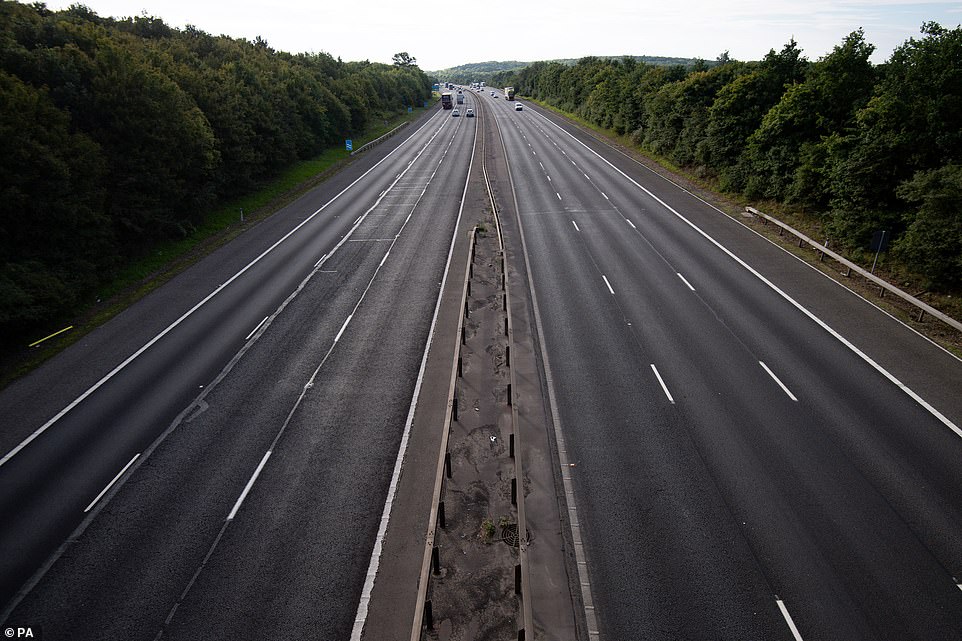 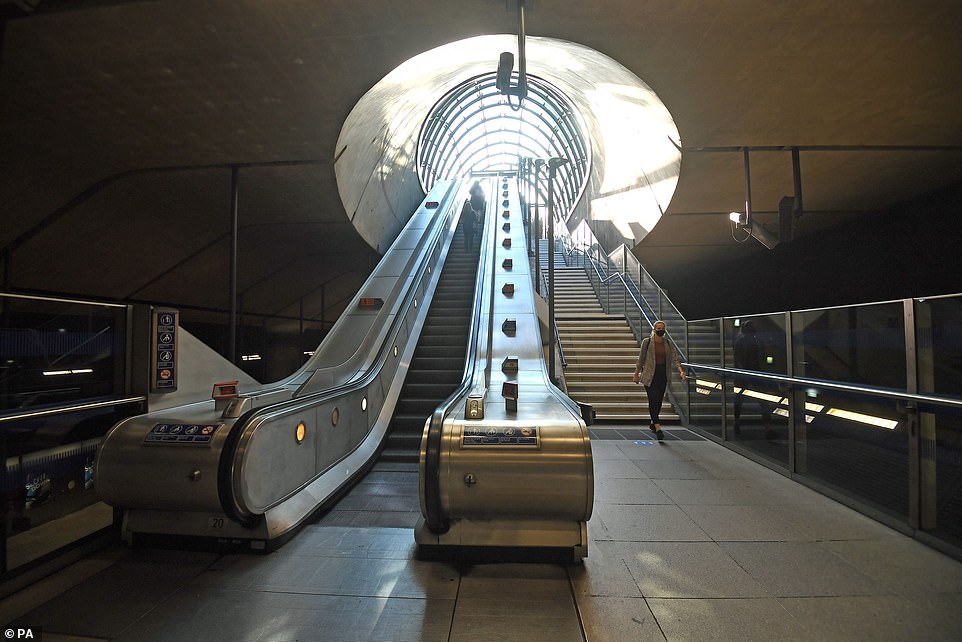 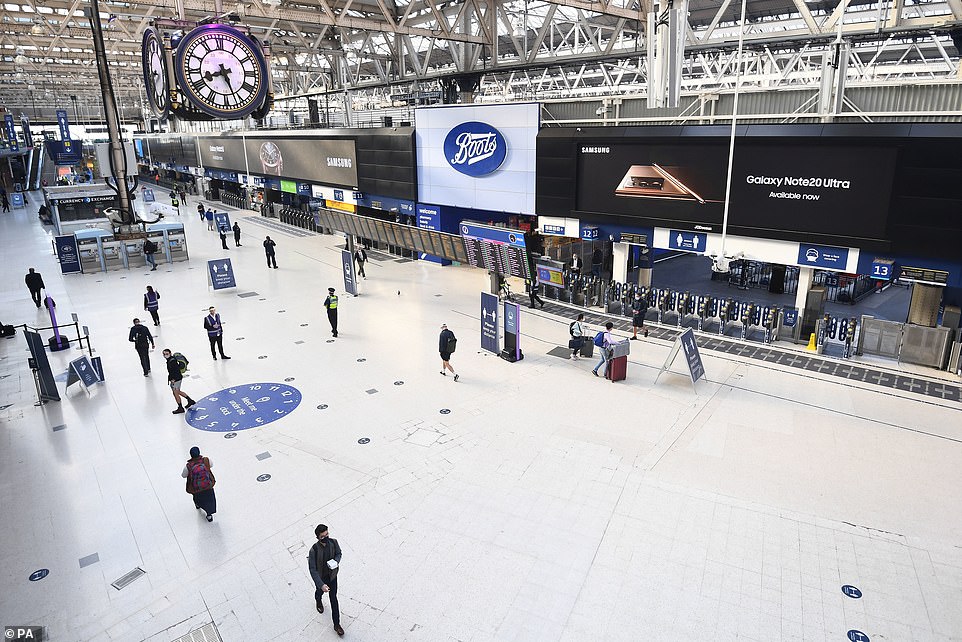 The near-empty concourse at London's Waterloo, which is Britain's busiest station, during this morning's rush hour

Congestion levels at 8am today (far right) were at 41 per cent (red line), compared to 28 per cent last Wednesday (red dotted line) - a rise of 13 percentage points or nearly double the amount. This was up on the same time yesterday at 36 per cent, but still well below last year's average of 67 per cent (blue dotted line), according to the data from TomTom 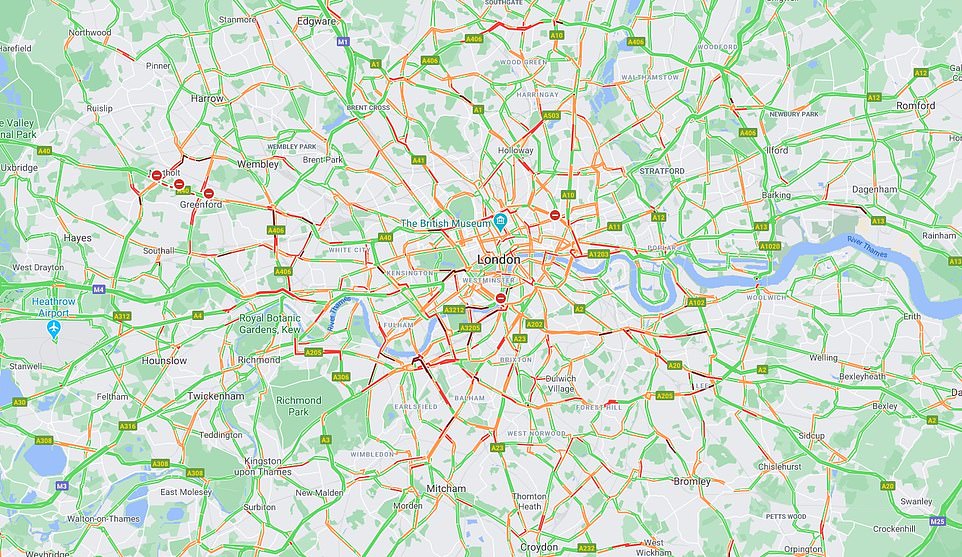 A Google Traffic map at 9.30am today shows busy roads in Central London (red), but many in the suburbs are clear (green) 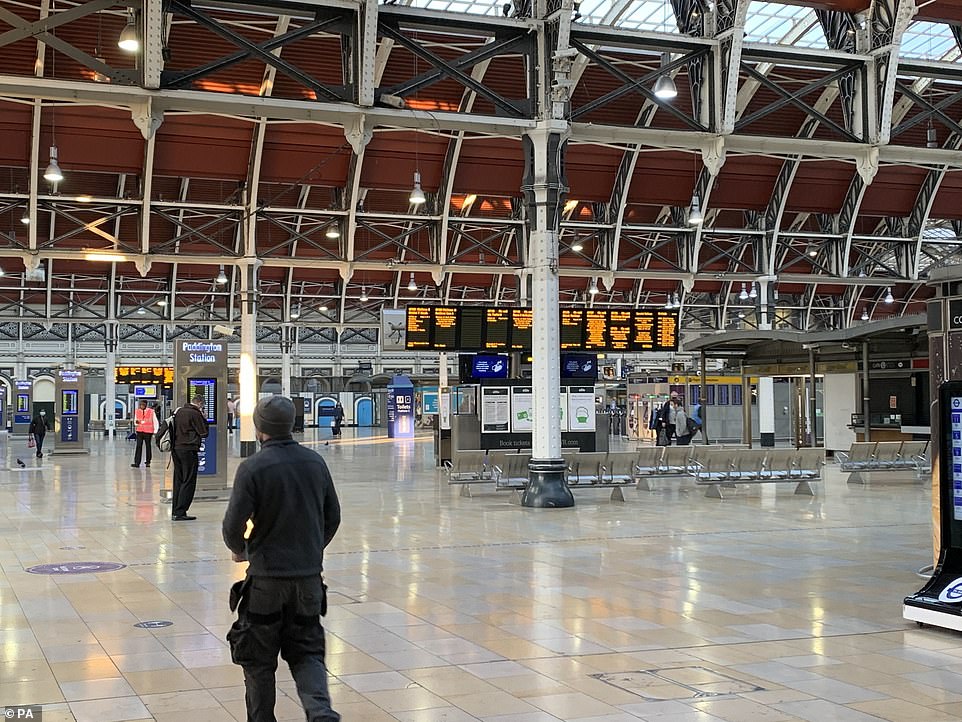 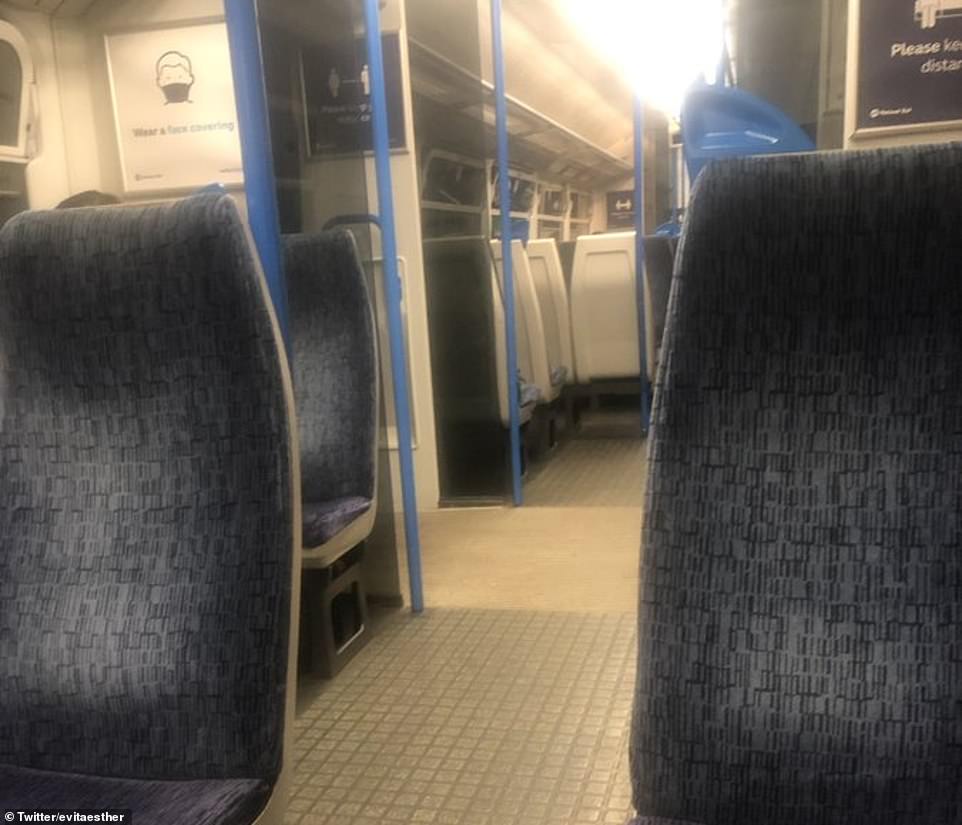 A mostly empty Southeastern train is photographed by a commuter during rush hour at 7.30am this morning 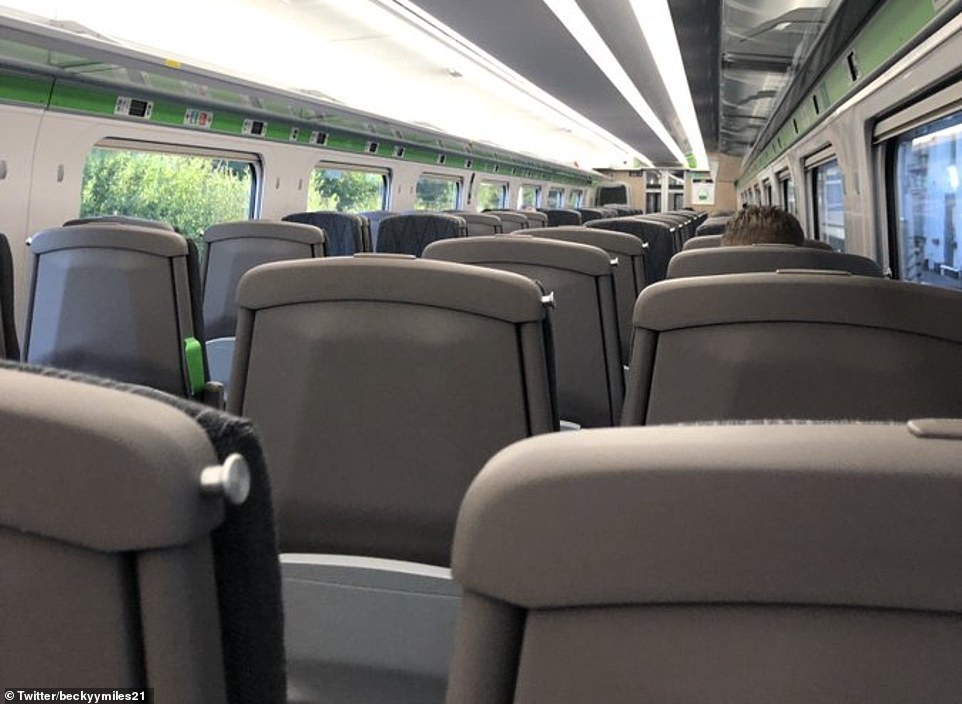 The 7.23am Great Western Railway train from Swindon to London Paddington this morning is mostly empty 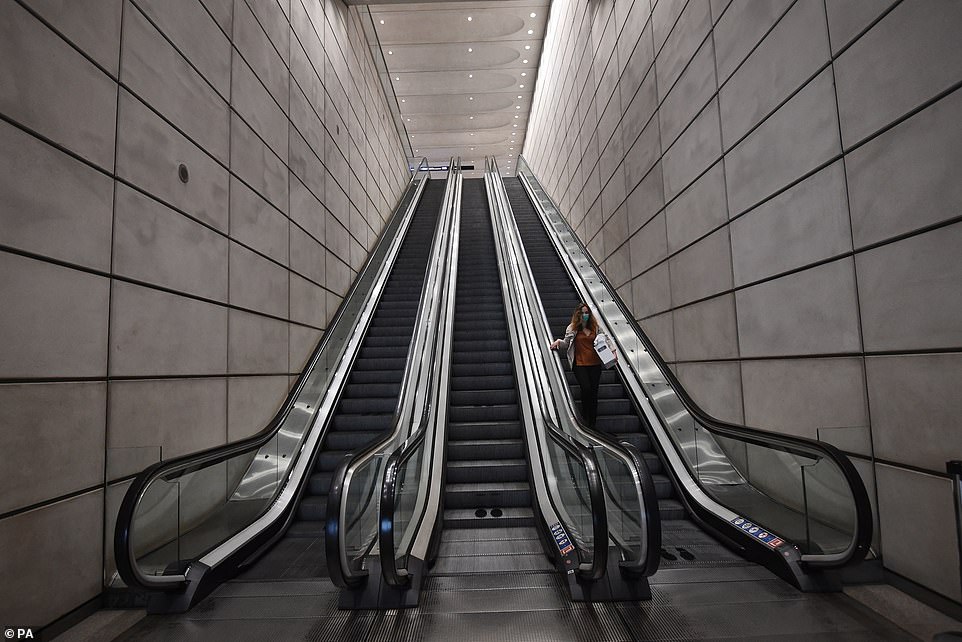 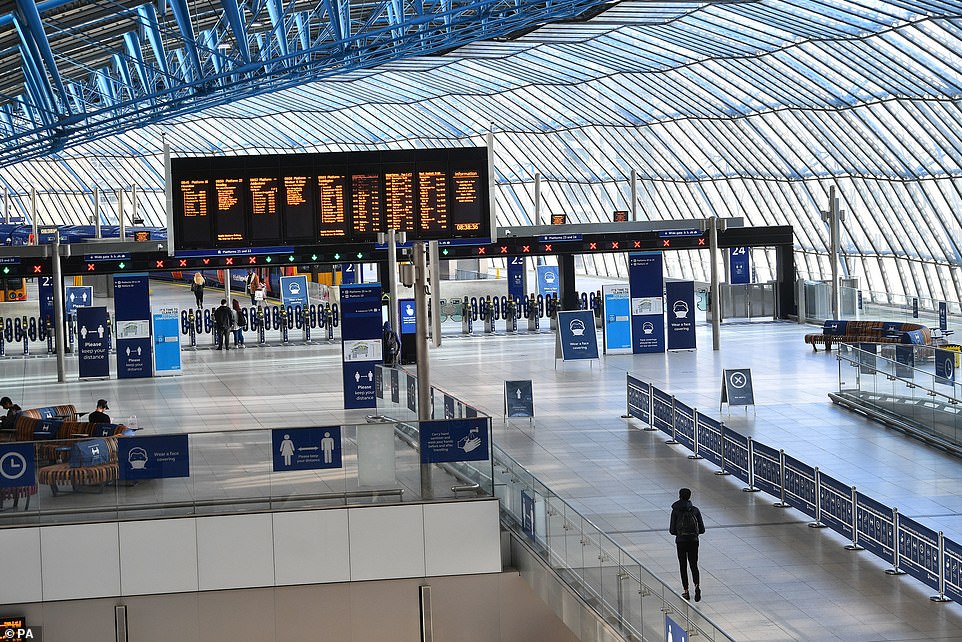 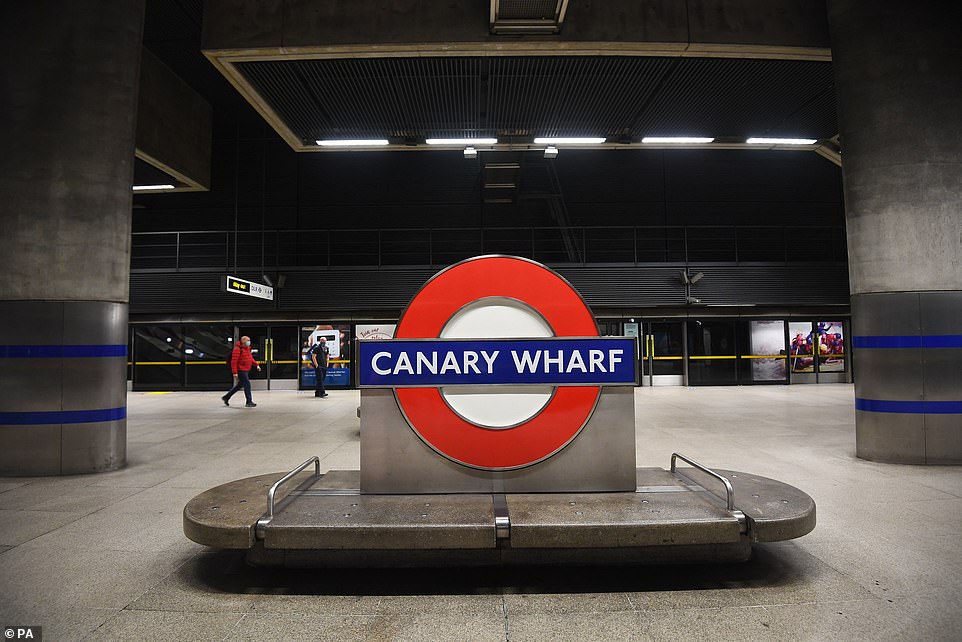 A platform at Canary Wharf Underground station in East London, which is mostly empty today despite it being rush hour

As Downing Street tries to encourage people back to the workplace, Ms Coffey told BBC Breakfast: 'Even then we have capacity on how many people can be in a Covid-safe environment within our workplace.'

Ms Coffey added that 799 of the department's 804 sites are open, and hoped that children returning to school would give parents more opportunities to go back to the office.

Teaching union chiefs today admitted schools were as 'safe as possible' as millions more children returned to classes in England and Wales after six months at home during the coronavirus lockdown.

The National Education Union said schools were seeing a 'very calm, managed and positive' return to the classroom as families largely appeared to defy virus fears, with many schools reporting high attendance rates. 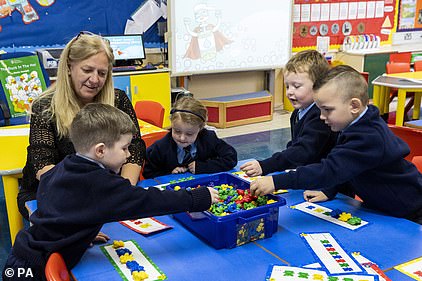 However in Scotland more than 100,000 pupils are absent from school, with 117 testing positive for Covid-19 and the attendance rate in the country's schools – which went back on August 11 – at just 84.5 per cent.

Mary Bousted, joint general-secretary of the London-based NEU, told BBC Radio 4's Today programme this morning: 'Yesterday for those pupils who returned and today when more will return, it's a really important day.

'There'll be lots of nervous children and young people this morning, and I'm sure when they get into school they'll very quickly be reassured by the routines and be really glad to be back with their teachers and their friends.'

'So we hope that everything will go well, and the signs are at the moment that it's a very calm, managed and positive return to school – and that's good.'

However, she added that schools were struggling with the extra costs of cleaning, putting Perspex screens up, and rearranging the school – amid the 'huge distraction which was the A-level and GCSE fiasco in secondary schools'.

Ms Bousted continued: 'So one of the real concerns is that this is costing quite a lot, and schools do not have that money in their budget, and that's a worry – and that will be a continuing worry.'

It follows teaching unions being accused in June by MP Jonathan Gullis,