Jerry Oppenheimer is a New York Times bestselling author and two of his thirteen books have been bestselling, headline-making biographies of the Kennedy family – The Other Mrs. Kennedy, and RFK Jr. and the Dark Side of the Dream.

Within a day of Kellyanne Conway's surprise decision to leave the White House, the outspoken blonde once called 'The True First Lady of Trump's America,' was being bombarded with multimillion-dollar book and movie offers, according to insiders.

The heads of the major book publishers were preparing what insiders say will be the biggest advance ever for a Trump tell-all – 'well over $15 million,' and Hollywood producers are 'going to war for the film rights,' revealed a high-powered insider.

A top New York publishing source says, 'Millions are on the table for Kellyanne - at least $15 million and maybe more -- because her story has it all.

'There's her powerful insider status as ultra loyal counselor to America's most controversial president – his chief political advisor, and how her position tore apart the fabric of her family life, and why she's leaving one of the most powerful inner-circle political positions to mend it with her husband and rebel daughter. It's blockbuster material!' 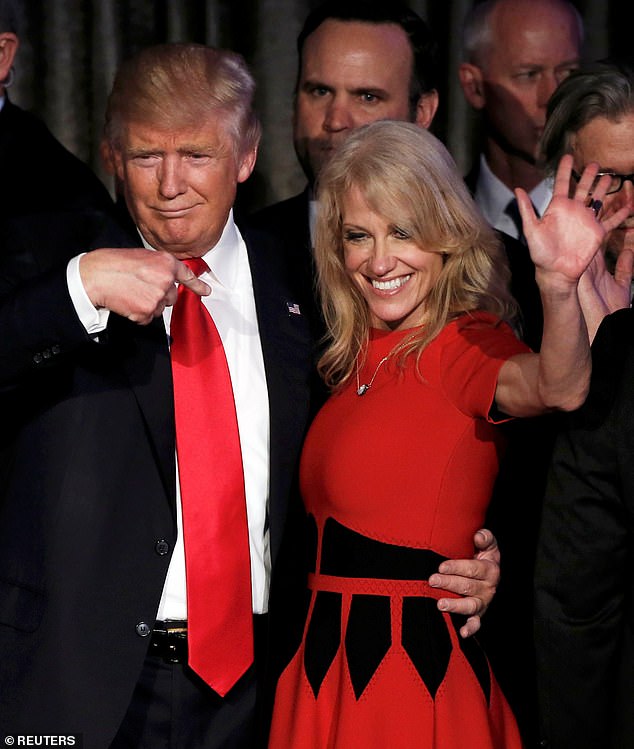 Book publishers and movie producers are offering Kellyanne Conway millions to tell her story as one of Donald Trump's closest advisors. The pair are pictured on election night 2016 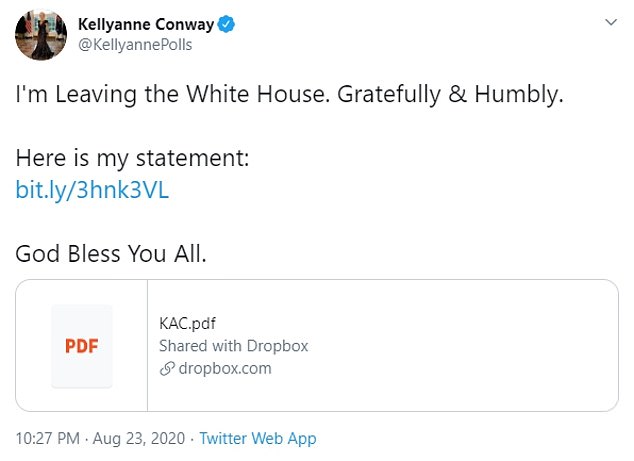 Conway confirmed the news of her departure from the White House on Twitter, saying she was leaving 'gratefully & humbly' last week and it didn't take long for the cash offers to start rolling in 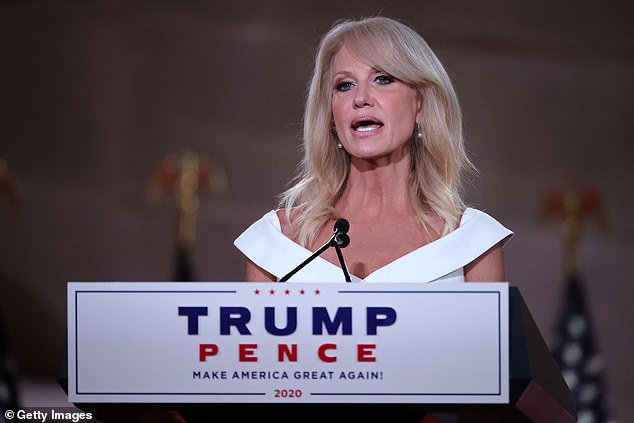 If Kellyanne inks a deal worth close to $15million it will be considerably more than other Trump players who have cash in their chips. James Comey got a reported $2million advance for his book - John Bolton the same. Trump's predecessors fared better with Barack Obama getting an astounding $65 million.

Kellyanne's story, as a leading New York and Washington, D.C. literary agent who has handled many of the big political books told DailyMail.com, 'is one for the masses – Republican or Democrat, man or woman. Everyone can relate to how a down-to-earth woman with immense power fights to save her family life. It's a once in a lifetime story and book deal, with immense big-screen potential.'

And a top Hollywood producer declares, 'The Kellyanne story is a ready-made-for-the-screen reality show. It has all the elements – powerful loyal Trump wife vs. powerful Trump-hating husband, and woke teenage daughter who wants a divorce from her broken politicized family who goes on social media to denounce them both. It's the box office smash we've been waiting for. Just like Kellyanne said in her resignation, the film's title is already engraved – ''Less Drama, More mama.'''

According to that source, movie rights 'will be worth millions more to Kellyanne on top of the millions she gets from the publishing world, so all told, along with other affiliated rights, she should could easily cash-in with close to $50million. Talk about a golden parachute!!!'

As one of President Trump's most visible, outspoken and longest-serving advisors, Kellyanne, who will be 54-years-old next November when she hopes to see President Trump elected for a second term, made her surprise announcement on Twitter on the eve of the start of the Republican National Convention, stating that she was stepping away from her White House role to spend more time with her family – husband and four teenage children.

'This is completely my choice and my voice,' she told millions of Twitter followers, and the media. 'In time I will announce future plans. For now, and for my beloved children, it will be less drama, more mama.'

She added that she and her husband 'disagree about plenty but we are united on what matters most: the kids.'

In an interview last week with Fox News's Martha MacCallum prior to Kellyanne's speech at the Republican National Convention, the just-resigned presidential counselor declined to say what her future career plans are - and wasn't asked whether a book deal might be in the works.

'I will announce my plans in the future,' was all she would say. Instead, she noted, 'I have to invest in leisure wear and hover over my kids as they hover over their computers during school from home.'

And she credited her career success to Donald Trump, calling her inner-circle job a 'blessing not a burden,' a job she noted she started when she had just turned 50-years-old. 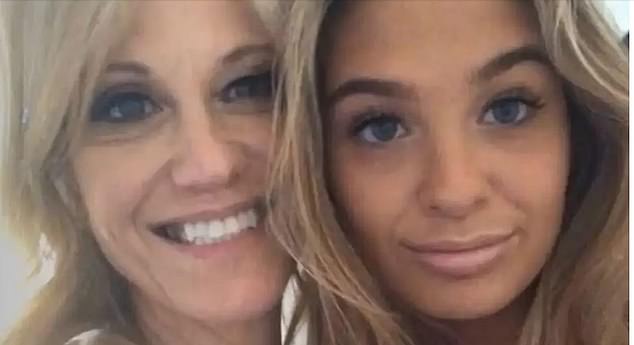 'Just like Kellyanne said in her resignation, the film's title is already engraved – ''Less Drama, More mama''' a top Hollywood producer said due to the fact that her daughter Claudia has been outspoken against her mother and Trump 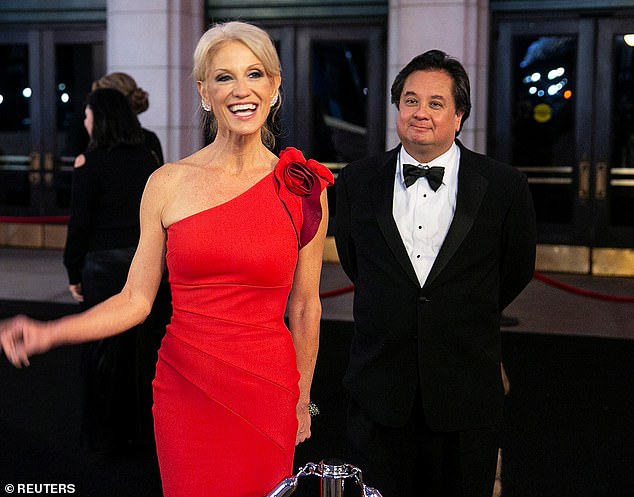 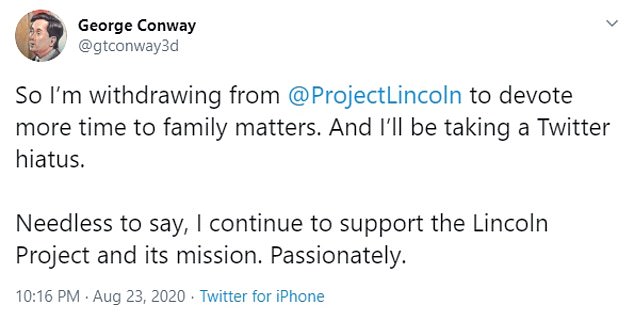 In her formal resignation, she said, 'Our four children are teens and tweens starting a new academic year, in middle school and high school, remotely at home for at least a few months.

'As millions of parents nationwide know, kids ''doing school from home'' requires a level of attention and vigilance that is as unusual as these times.'

Meanwhile, her future plans may already be set in stone, as it didn't take very long after her announcement shot across social media for the publishing and movie worlds to come knocking. 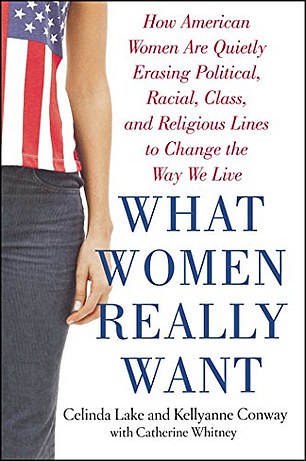 Conway is a veteran in publishing, having co-written a book in 2005 about 'the ways in which women are reshaping American society and paving new ground for future trends'

'Kellyanne's being literally barraged with piles of money to tell her story in print and on the big and streaming screens,' a Conway family insider told DailyMail.com. 'It's going to be pro-Trump all the way, but her insider stories of life working beside the president will make all those other so-called Trump tell-all books, most of them pure fiction, look pale by comparison.'

Conway would join a tall list of former Trump employees who have made a hefty check from writing about their time with the president, including former FBI director James Comey, National Security Advisor John Bolton and personal fixer and lawyer Michael Cohen.

With the proposed blockbuster book on the horizon, it would not be Kellyanne's first publishing effort.

In October 2005, a decade before she joined the Trump White House, she co-authored a well-received book entitled, 'What Women Really Want: How American Women Are Quietly Erasing Political, Racial, Class, and Religious Line to Change the Way We Live.'